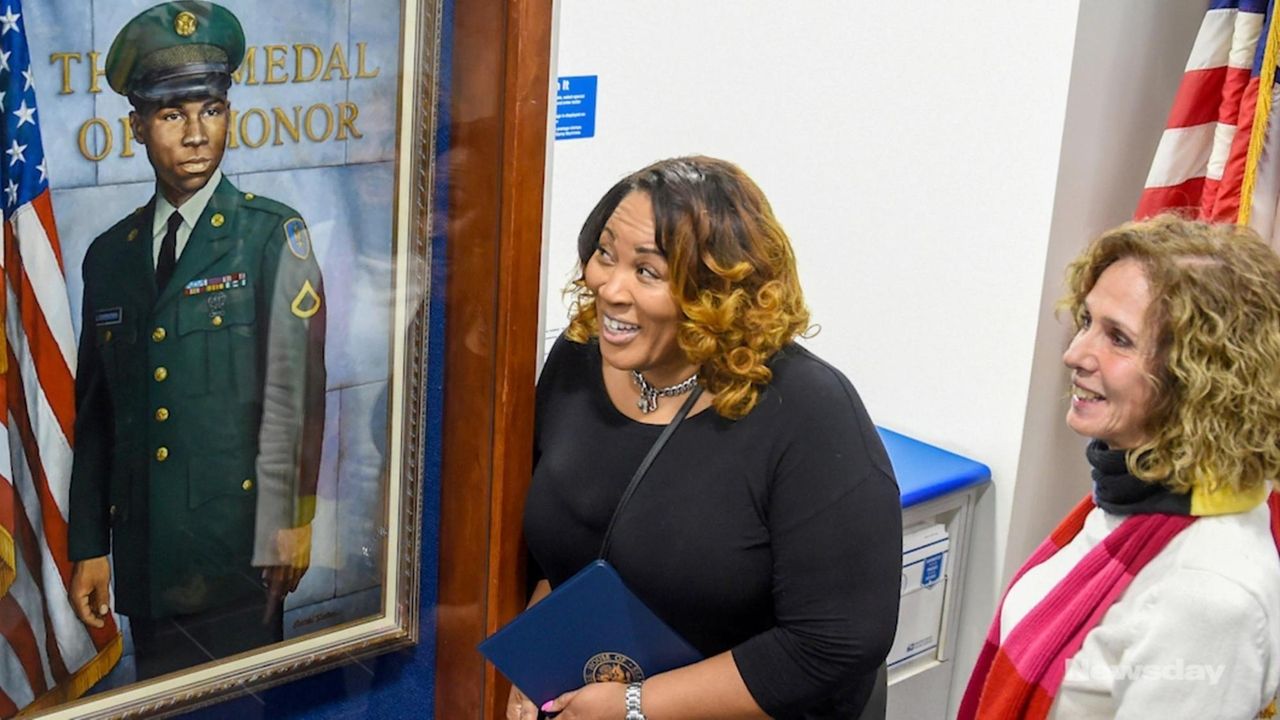 On a frigid day Martin Luther King Jr. Day in Riverhead, a cross section of Long Island gathered to remember a native son who earned the nation’s highest military honor 50 years ago in a steamy Vietnam jungle clearing.

Pfc. Garfield Langhorn, who grew up a mile from where the celebrants gathered Monday in the lobby of a post office that had been named in his honor, perished on Jan. 15, 1969, when he fell on an enemy grenade to shield fellow soldiers.

The gathering of about 40 people included Doris Eve, whose then-fiancee Rodney Eve was present when Langhorn was killed and who before he died in 2005 credited Langhorn’s sacrifice with sparing his life.

“My life began when Rodney was able to come home,” said Doris Eve, of East Patchogue, who came with five Eve relatives, including Benjamin Rodney Garfield Eve, 7, who was named in honor of the slain soldier.

“He gave Rodney and me our lives,” Doris Eve told the gathering, which included Rep. Lee Zeldin (R-Shirley) and other elected officials, Langhorn relatives and more than two dozen veterans, many of them green-jacketed members of Vietnam Veterans of America. “Garfield means everything to me. We love him.”

In 1969, Langhorn had been among soldiers of the Army’s 7/17th Air Cavalry who were rushing to the aid of a pair of American airmen, whose helicopter clipped some trees and tumbled into a ravine west of Pleiku.

Engulfed in nighttime darkness, Langhorn was helping to protect wounded soldiers from advancing North Vietnamese troops when a grenade rolled toward them, landing within a foot of Langhorn’s left side.

What happened next was recounted in a citation that was read at the April 1970 White House ceremony at which Langhorn was posthumously awarded the Medal of Honor.

“Choosing to protect these wounded, he unhesitatingly threw himself on the grenade, scooped it beneath his body and absorbed the blast,” the citation read. “By sacrificing himself, he saved the lives of his comrades.”

But with the Vietnam War increasingly unpopular, and its death toll having mounted into the tens of thousands, the lanky 20-year-old was mostly forgotten over the next decades.

That began to change in the years after 9/11, as the war on terror led many Americans to view veterans in a more positive light.

“We all cried hard for him,” said Clarence Simpson, a Vietnam veteran who knew the Langhorn family while growing up, and who helped organize the commemorative gathering. “Now he’s getting the recognition he deserved.”

LI’s Medal of Honor recipients At least 18 of the more than 3,000 recipients have ties to Long Island.