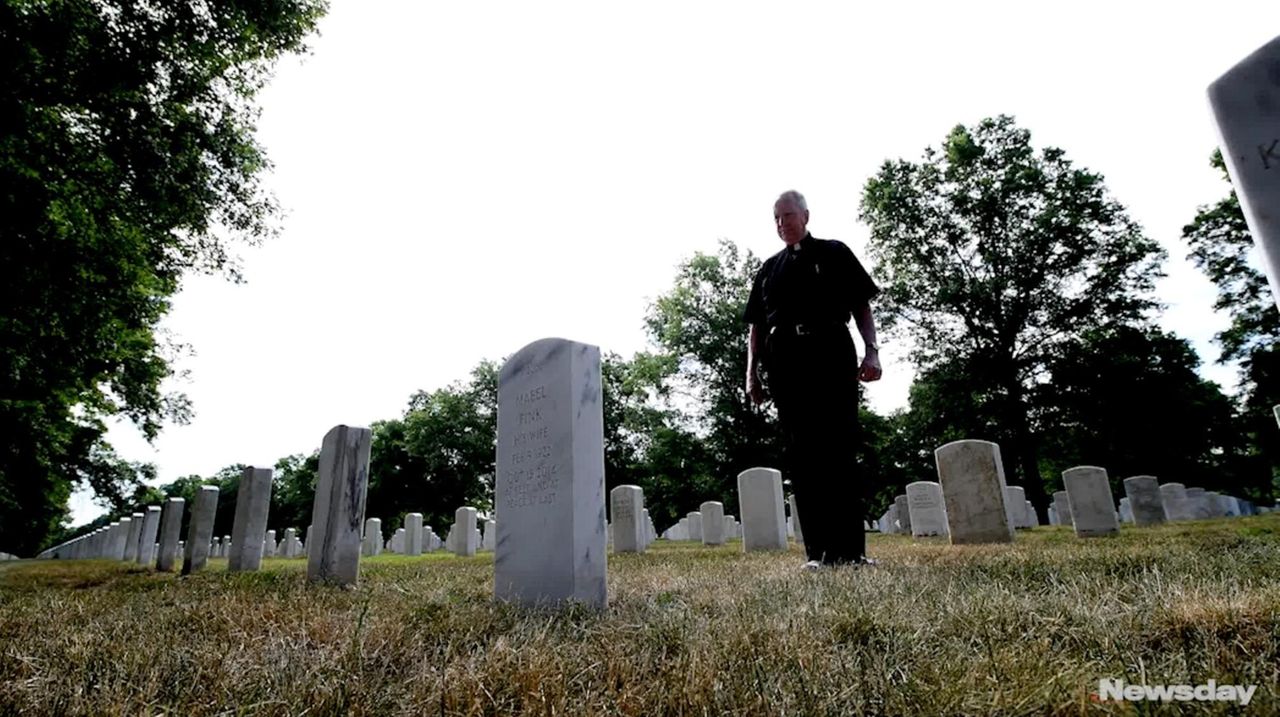 Msgr. Charles Fink reads the poem "Bury Me With Soldiers," which he wrote as a tribute to the U.S. servicemembers who served during the Vietnam War. Today, the poem is read at the funerals of Vietnam War veterans nationwide. Credit: Newsday / J. Conrad Williams Jr.

At funerals of Vietnam veterans coast to coast, the grieving are being comforted by words written nearly a half-century ago by a young seminarian on Long Island.

“Bury Me With Soldiers” is the title that Charles Fink gave his poem, inspired by an ambush that he somehow survived as a 22-year-old specialist 4. Today, at 71, Msgr. Charles Fink leads Our Lady of Snow Roman Catholic Church in Blue Point.

On May 27, 1969, Fink was in the humid jungle countryside east of Saigon. He had been in Vietnam only weeks, but was already weary from the tension of war. On this day, the St. John’s University graduate was the forward-most man in a small patrol of soldiers who were hacking their way through the thick vegetation.

Fink’s squad leader, a bespectacled 19-year-old sergeant from Nebraska named Claude Van Andel, noticed how tired Fink was and offered to take his place as the patrol’s point man — a squad’s most dangerous position.

Moments later, a mine exploded. Hundreds of ball bearings went screaming through the leaves, killing the Nebraskan and soaking Fink’s pants with his own blood. The firefight that followed left most of the dozen or so U.S. troops either dead or wounded.

Fink ended up spending a year in Vietnam. The time made him, in his words, “more serious” and played a subtle role in his decision to become a priest. He wrote the poem a few years after coming home, when he was a student at the Seminary of the Immaculate Conception in Huntington. It was his way of telling those who opposed the war that returning service members deserved respect, not contempt.

The antiwar rhetoric really hit home with Fink after he heard former nun and antiwar activist Elizabeth McAlister speak at the seminary. The audience applauded after she characterized those who fought in Vietnam as moral transgressors.

“I was so outraged that so many were nodding in approval,” Fink said. “I wrote the poem within a few days of that. It was my take on soldiers, as opposed to the one she made.”

It’s funny when you think of it,

The way we got along.

To live in one no one belongs

I’m sure they’d all agree.

Yet, I would give my life for them,

I hope. Some did for me.

So bury me with soldiers, please

Though much maligned they be,

Fink’s words have been shared on Facebook and veterans’ websites, set to music by a cowboy band, included unattributed in an anthology and read at ceremonies at the Vietnam Veterans Memorial Wall in Washington, D.C. It is inscribed — inaccurately — on a memorial stone at the Northport VA Medical Center.

“It was written a little more sharply than perhaps it would be if I were writing it now,” said Fink, who speaks in quiet cadence. “At the time, I was really angry in the aftermath of that talk. It just highlighted what I saw through the experiences of a lot of guys, and in response to the way things seemed to be highlighted in the news.”

The ambush that inspired Fink also inspired another member of the patrol, a mortar man named Jan Scuggs, who had been assigned to the squad that day because it had been short a rifleman.

Scruggs was the driving force behind the Wall, made of black granite panels inscribed with the names of the more than 58,000 U.S. troops killed in Vietnam. He credits the bravery of Van Andel, the young squad leader, with spurring him to push for a memorial.

Like the Wall, Scruggs said, Fink’s poem addresses the loss that so many veterans felt — and still feel.

“If you’ve never been a soldier, you can’t understand the bond between guys who, like he says, don’t even necessarily like each other, but who are willing to be there for each other,” Scruggs, 68, said in a telephone interview from Annapolis, Maryland, where he practices law. “His poem captures the bond soldiers feel.”

Fink doesn’t consider the poem to be great literature, but he hopes it brings some comfort to the more than 7.3 million living veterans who served during the Vietnam War.

“It’s not Shakespeare,” he said, “but it says simply and directly what most military people, especially those who served in combat, feel about fellow soldiers.”

Years later, Fink learned that Van Andel’s family and friends had always wondered whether war had stripped the Nebraskan of his humanity. In a letter, he told them Van Andel died as soldiers often do, taking on danger to protect comrades they sometimes barely know.

“I wish you could have seen him the day he died,” he wrote. “Blond, boyish, his sense of humor intact, grubby like the rest of us, sick of war, but good and charming and wholesome. The war killed him . . . but it never destroyed him.”

BURY ME WITH SOLDIERS

I’ve played a lot of roles in life;

I wouldn’t do again.

And think about what lies beyond,

Beside whom I would lie.

Perhaps it doesn’t matter much;

Still, if I had my choice,

When at last death quells my voice.

I’m sick of the hypocrisy

Of lectures by the wise.

I’ll take the man, with all his flaws,

Who goes, though scared, and dies.

The troops I knew were commonplace;

They didn’t want the war.

They fought because their fathers and

Their fathers had before.

They cursed and killed and wept — God knows

They faced the guns and died.

It’s funny, when you think of it,

The way we got along.

To live in one no one belongs.

I’m sure they’d all agree.

Yet I would give my life for them,

I hope. Some did for me.

So bury me with soldiers, please,

Though much maligned they be.

Yes, bury me with soldiers, for

I miss their company.

We’ve had our fill of war.

Till someone else does more.