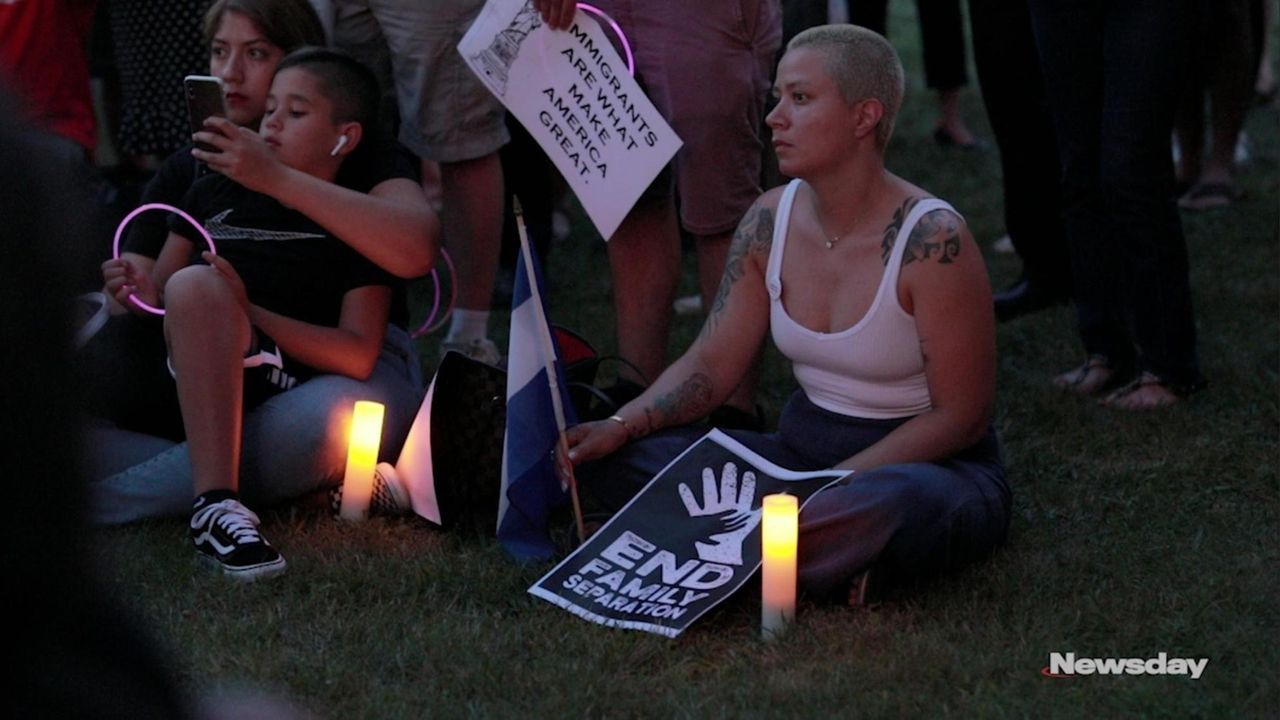 "Lights for Liberty: A Vigil to End Human Concentration Camps" was held in Huntington on Friday. Organizers have said more than 500 such events took place worldwide Friday to protest the inhumane conditions being faced by migrants at the border. Credit: Newsday / Yeong-Ung Yang

Area activists, in support of immigrants being held at the nation’s southern border, held candlelight vigils in Patchogue, Garden City and Huntington on Friday night, in sync with hundreds of others who held events across the globe.

The Lights for Liberty vigils in Nassau and Suffolk counties drew Long Islanders of many stripes — immigrants and their supporters, a mix of races and ethnicities, but they were united in trying to send a message of solidarity with the thousands of migrants held in detention centers on the border with Mexico.

A very large vigil was planned for Manhattan's Foley Square.

“We absolutely knew that we had to take part in this to stand up to abuse and trauma and inhumane treatment of the children,” said Sharon Golden, co-administrator of Together We Will — Long Island, which held a vigil that drew hundreds of people to the Unitarian Universalist Congregation of Central Nassau.

Organizers have said that there were over 500 events worldwide Friday bearing the title “Lights for Liberty: A Vigil to End Concentration Camps.”

Golden, who was one of several speakers, said she asked the crowd to become more engaged in the issue.

“It’s beautiful that you’re all here tonight. But what about tomorrow” she said, exhorting the attendees to take further action? “We need your voice. We need you to speak up.”

Other speakers included representatives from labor and civil rights organizations, lawmakers and attorneys.

The vigils took place a day after published news reports said President Donald Trump’s administration had authorized deportation raids by Immigration and Customs Enforcement agents to remove immigrants who are in the country illegally.

The dragnets in 10 major cities are scheduled to begin Sunday. The threat of the raids prompted immigration attorneys and organizations that assist immigrants to launch "Know Your Rights" campaigns online and through phone contact to ease the fears of anyone who might be targeted.

In Huntington, among the placards people brought to the scene at Main Street and Park Avenue were the phrases “Families Belong Together” and “End Family Separation.”

An aide to Rep. Tom Suozzi (D-Glen Cove) read a statement from the congressman, who was inspecting detention centers in Texas on Friday.

“While I tour and inspect detention facilities and ports of entry at the border towns of McAllen and Brownsville with 20 of my Democratic colleagues, we need you to continue to fight for humane treatment of babies, of children, of families and of all people in the United States of America,” he said in the statement. “Inhumane treatment of any person.... is un-American. I commend each and every one of you for doing all you can to keep a spotlight on this growing concern and know that I stand with you in spirit as we continue to raise the alarm.”