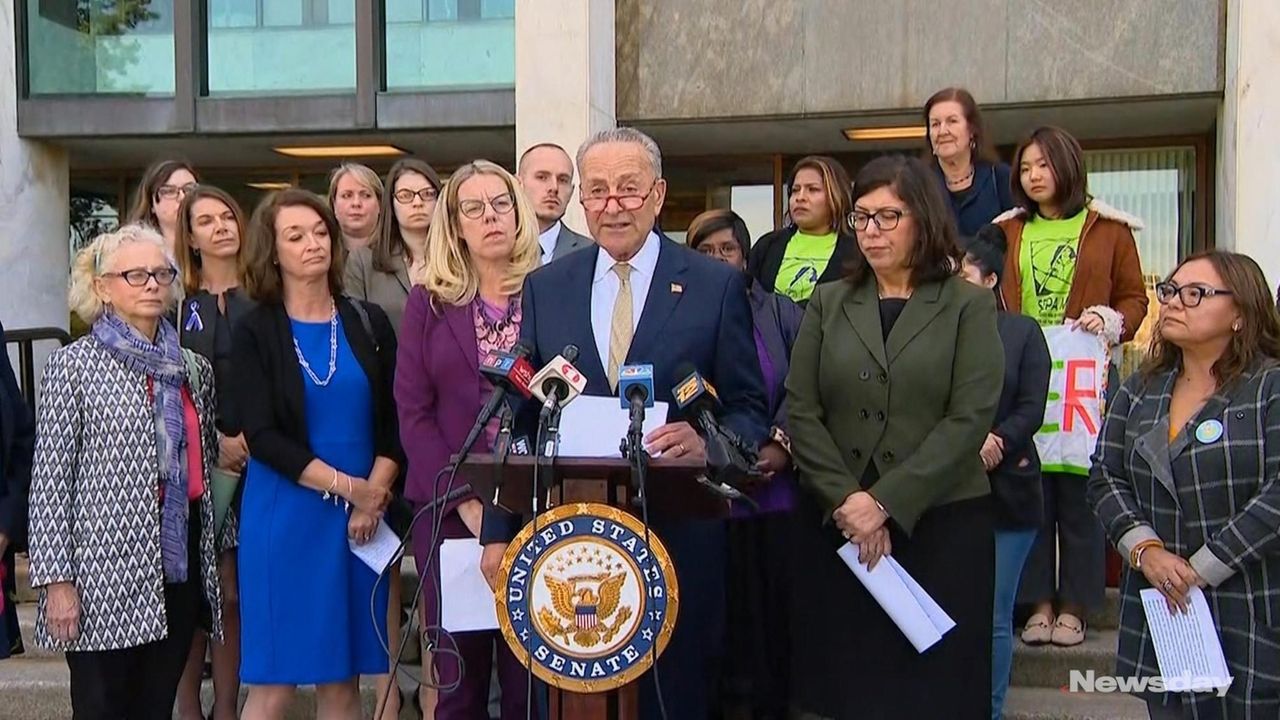 U.S. Senate Minority Leader Chuck Schumer speaks Tuesday at a Mineola news conference where he urged the Senate to pass a House-approved extension of the Violence Against Women Act. Credit: News 12 Long Island

The solution is the reauthorization of the Violence Against Women Act, which expired in February, said Schumer (D-N.Y.), the Senate minority leader, at a news conference in Mineola with Nassau District Attorney Madeline Singas, lawmakers, domestic violence advocates and victims.

The bill, which would extend the act for five years, provides funds to help victims, law enforcement, prosecutors, schools and advocacy programs.

"The message is simple: Unlock Long Island's access to these funds by reauthorizing this bipartisan law," Schumer said. "It is very important. It has been sitting there for six months and that's much, much too long."

The Violence Against Women's Act has been reauthorized three times — in 2000 and 2005 with unanimous approval and again in 2013. The bill, Schumer said, has led to a 50-percent reduction in domestic violence assaults.

A spokesman for Senate Majority Leader Mitch McConnell (R-Ky.) declined to comment about the status of the Senate bill and referred inquiries to Sen. Joni Ernst (R-Iowa), who has been working on the legislation. Ernst's office did not respond to requests for comment.

Singas, a former special victims prosecutor, said passage of the bill will save lives on Long Island and throughout the country. Thus far in 2019, the Nassau district attorney's office has investigated 1,359 domestic violence cases, officials said.

"Domestic violence affects so many of our families," said Singas, a first-term Democrat seeking reelection in November. "It doesn't matter who you are, where you come from, where you live, how much money you make. We find that domestic violence abusers come in all sizes and shapes. … These are purely issues of power and control."

Since 2014, Long Island organizations have received more than $4.6 million in federal funding through the Violence Against Women Act, including nearly $2 million last year, Schumer said.

"I know firsthand how trapped and isolated a victim can feel," Hahn said. "The vital services funded by the Violence Against Women Act are a lifeline to women and families."

Funding for the act's programs has been maintained temporarily through short-term continuing resolutions. But program advocates said they need greater certainty about funding in the long term.

"To sit on your hands and think about whether or not to move forward is unacceptable," said Dolores Kordon, executive director of Brighter Tomorrows, a Shirley nonprofit that provides services for domestic violence victims, in part through Violence Against Women Act grants.

The House bill would close the so-called "boyfriend loophole" by expanding the firearms ban for domestic violence perpetrators to include all intimate partners who have been convicted of abuse or stalking. The previous firearms ban included only spouses, live-in partners and perpetrators who have a child with the victim.

Schumer attributed McConnell's intransigence on the bill to the National Rifle Association, which has lobbied against the House measure, arguing it politicizes gun-control policies. The NRA did not respond to a request for comment.

Elmont resident Josephine Hodge said she might not be alive without the resources from the Violence Against Women Act. Hodge said she was physically abused for more than a decade by a live-in boyfriend who once threw her through a glass window, requiring major reconstructive surgery of her nose.

She eventually turned to the Safe Center of Long Island, a Bethpage nonprofit that serves domestic violence victims. The group, which receives Violence Against Women Act grants, provided Hodge with counseling and two years of housing.

"My life was just in shambles," Hodge said. "I was homeless. They housed me. They gave me so many different services to get me back on my feet. Each session I came back to life. I was so dead inside that I didn't want to live."

The prospect of the Safe Center losing the federal funding, Hodge said, is incomprehensible.

"It's really sad," she said, "because it's desperately needed. People are desperately hurting out there. They need the help."

Domestic violence in 2018 by the numbers: