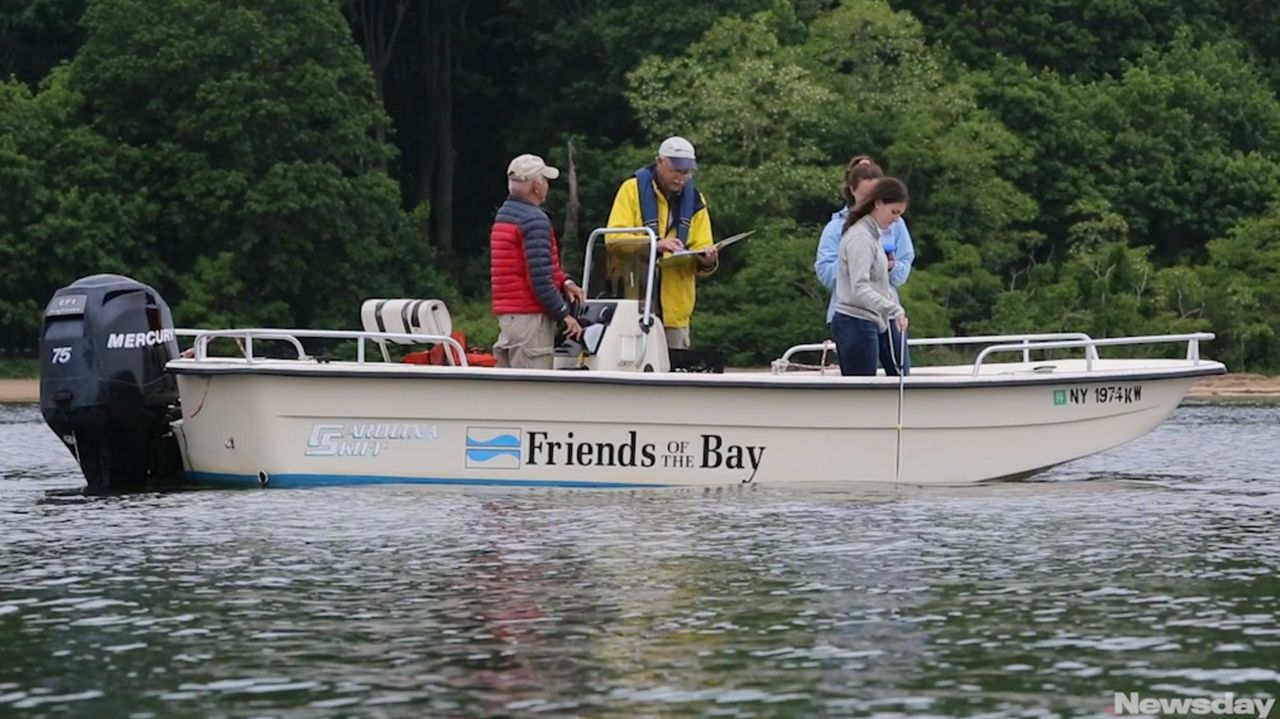 Friends of the Bay, one of the groups volunteering to collect water samples in bays and harbors as part of an initiative to monitor the health of Long Island Sound, started taking water samples in Oyster Bay on Wednesday, May 24, 2017. The volunteer groups report the data to Save the Sound, which trained the volunteers and will compile the data. Credit: Barry Sloan

Groups of volunteers from New York and Connecticut will spend the next six months collecting water samples in bays and harbors as part of a new initiative to monitor the health of Long Island Sound.

These “Sound Sleuths” will head out around dawn twice a month to 24 locations to document levels of dissolved oxygen, a chlorophyll that eats nitrogen, temperature, salinity, water clarity and the presence of aquatic plants and seaweeds.

Previous monitoring focused on locations in the Sound. This effort is focused on the many bays and harbors feeding the Sound.

“We have a data gap,” said Tracy Brown, director of Save the Sound, a program of Connecticut Fund for the Environment, which trained the volunteers and will compile the data.

Twelve groups — a mix of environmental and municipal entities — will participate this year and 20 are signed on already for 2018.

In the past, water in the open Sound was used to come up with overall report card grades for different parts of the Sound, from the Western Narrows along New York City to the Eastern section out by Orient Point. Data from this new Unified Water Study will shed a light on bays and harbors and should be incorporated into the 2019 report cards, Brown said.

“It became very apparent to us the water quality data we had to report on was all in the Sound,” Brown said Wednesday. “You can’t extrapolate that if the open water out there gets a ‘B’ the bay water gets a ‘B’,” Brown said. “It’s really its own ecosystem.”

The Long Island Sound Funders Collaborative, a coalition of private and community foundations, is paying for the study, estimated to cost about $200,000 for equipment, training and other needs.

“With federal funding of clean water programs facing an uncertain future, restoration of Long Island Sound is in our hands,” Brown said.

Jamie Vaudrey, an assistant research professor of marine sciences at the University of Connecticut and a science adviser for the study, said the data would help to explain how the area’s 116 bays and harbor respond to nutrient pollution, which comes from aging septic systems, wastewater and fertilizers.

The study will “allow us to assess the health of bays and harbors and compare their condition, giving us the local knowledge to tackle nutrient pollution,” she said in a news release.

For many years a patchwork of groups had been monitoring select sites around the region. The Save our Sound initiative ensures everyone looks for the same data and samples in a uniform manner, said Paul DeOrsay, executive director of the Oyster Bay-based Friends of the Bay.

Each site has several spots where crews will take water samples by lowering a cylinder into the water that measures levels and sends data to a handheld device for recording.

At each spot, samples will be taken close to the sea floor and near the surface from May to October. A middle reading will be taken if the water is about 35 feet deep.

“Often in a marine setting, [the depths] can have very different characteristics,” DeOrsay said as he took samples in Oyster Bay.

Peter Janow, a retired marine who is part of a Cornell Cooperative Extension of Suffolk County team, said he was happy to fill the information void, even if it meant pre-dawn departures. “If it’s good data and we’re feeding the scientists and politicians what they need to make decisions, I’m ok with that,” he said.

Higher levels of chlorophyll a, which feeds on nitrogen, means you have more nitrogen, which can cause algal blooms and starve out marine life.

In the western part of the Sound “in the summer, when it gets really warm down deep, the oxygen disappears and then nothing can live down there,” DeOrsay said.