This year, Owen Karlson of Wading River turned 10. In his family, those double-digits mean something special: His parents would allow him to raise funds and participate in his first-ever Polar Bear Splash to benefit AHRC Suffolk.

Owen’s brother Elliot, 5, has been attending the Saul and Elaine Seiff Educare Center of AHRC in Bohemia for three years.

“My brother has special needs,” Owen said. “And I felt like I really wanted to raise money to help him and the organization that helps him.”

Their mother, Sarah Karlson, explained that Elliot has a rare chromosome disorder. He is deaf and non-verbal, with developmental delays. At the polar bear splash on Saturday, he could be found taking in the vibrations and upbeat energy of radio station PARTY 105.3 FM's giant speakers, and scooping up handfuls of sand on the Bay Shore beach. 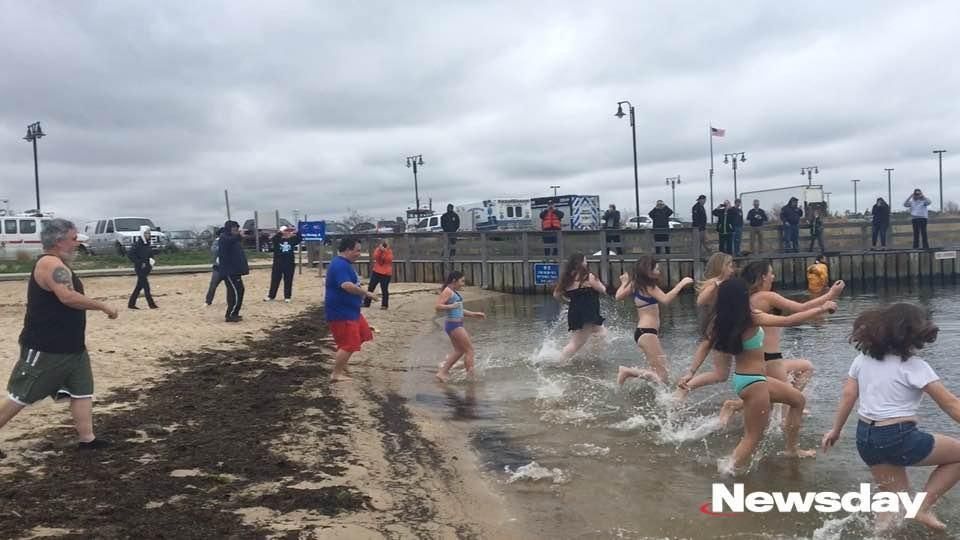 “He likes being outside, so he’ll be happy today,” she said.

The whole family seemed right at home by the shore. Even though it was Owen’s first plunge, his father Gary has been doing this for years. “I hold the towels,” Sarah said with a laugh.

“We did a few for Special Olympics early on when Elliot was a baby, just because we wanted to put our energy somewhere,” Gary said. “But once Elliot got connected with AHRC, we shifted our energies there and we were thinking at 10, it was time for Owen to start, because he had asked us in years past and we didn’t know if it was quite time for him to start hopping in there. And now he’s in.”

Leading up to the event, Owen raised $2,261 for AHRC Suffolk. He received the support of family and friends, plus one notable business: Bean and Bagel Cafe in Calverton. According to Owen, his brother loves the bagels there so much that he cries every time they pass it while driving. Gary and Sarah find themselves in the cafe quite often to pick up Elliot’s egg-everything with cream cheese. Then one day, the family asked if they could set up a donation jar.

“The owner over there was really thrilled,” Gary said. “She wouldn’t let me take the jar home until right before the plunge because she said they were going to make sure to get every last dime in there. So we’re really appreciative.” Ultimately, the cafe raised more than $1,000 for AHRC Suffolk, in support of Elliot and Owen.

Owen was all smiles as participants lined up on the beach to get ready for the splash, but said he was a bit scared.

“I heard that the water is going to be 46 to 51 degrees, probably the coldest water I’ve ever been in,” he said. “And I can’t even stand the bathroom water.”

Since this was Gary’s fourth plunge, he offered his son some advice: “We just told him he could go in as much or as little as he’s comfortable with.”

While some splashers went in the chilly waves up to their knees or shoulders, Owen ended up dunking his head underwater. This surprised his aunt, Leeana Costa, who went in the water with Owen and Gary, her brother.

Looking back on her nephew’s accomplishments of the day, she hugged him tight after wrapping him in a towel.

“Owen did a great job,” she said, later adding, “He’s already really good at being a big brother, and now he’s going to be a really good fundraiser.”