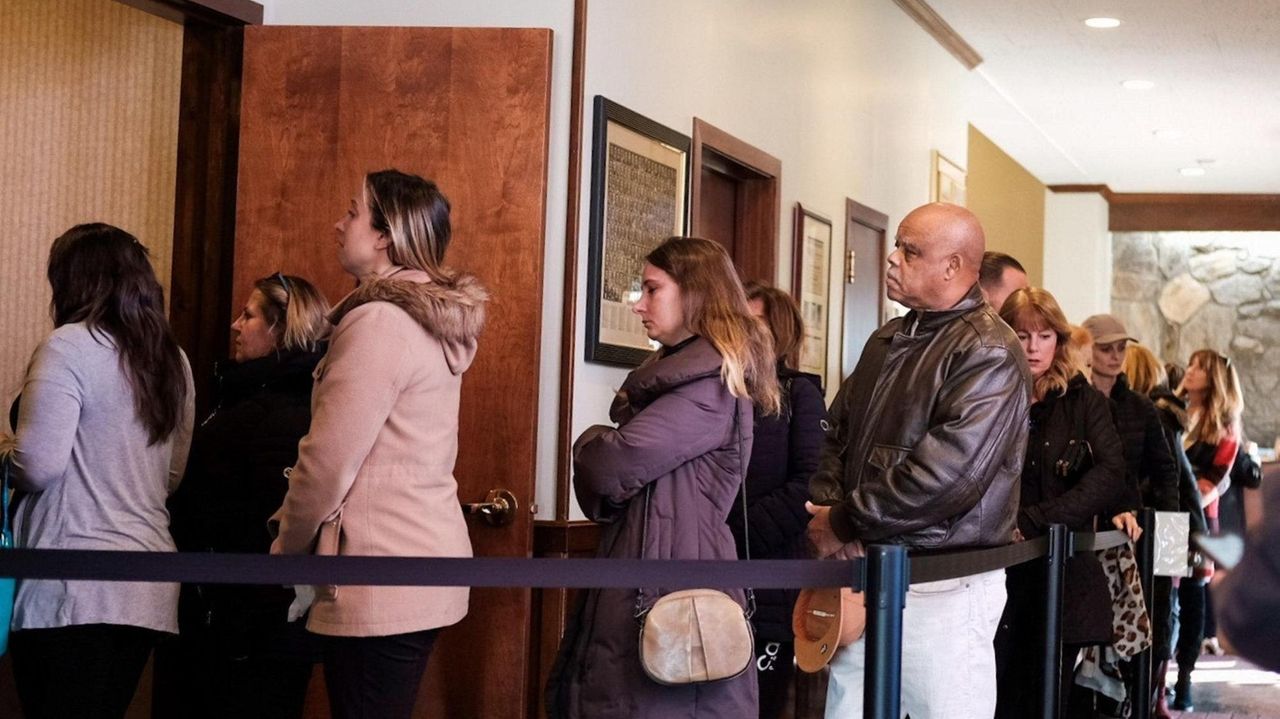 Some longtime family friends, and some complete strangers, crowded into a Deer Park funeral home Wednesday to pay their final respects, and to express outrage at the bureaucracy that failed to protect Thomas Valva, the boy who died after his father allegedly forced him to sleep in an unheated garage on a winter night.  Credit: Newsday / Steve Pfost

Hundreds of mourners, some longtime family friends, some complete strangers, jammed into a Deer Park funeral home Wednesday to pay their final respects to Thomas Valva — and to express outrage at the bureaucracy that failed to protect the boy who died after his father allegedly forced him to sleep in an unheated garage on a frigid winter night.

Justyna Zubko-Valva, the grief-stricken mother of the 8-year-old, said she was overwhelmed by the support she has received from friends, family, co-workers, and even people she has never met. She also blasted Suffolk County social services officials, judges, police and prosecutors who failed to intervene when she complained that Thomas’ father Michael Valva abused the boy, who was diagnosed with autism, and his brothers.

“This could have been preventable,” Zubko-Valva said after the afternoon wake for her 8-year-old son at Mangano Funeral Home. “But the people who protect children were protecting the abuser instead.”

Valva, 40, and his fiancee Angela Pollina, 42, were charged last week with second-degree murder in the death of Thomas, who died Jan. 17 from hypothermia after allegedly being forced to sleep in the unheated garage at their Center Moriches home. A grand jury indicted Valva and Pollina, Suffolk prosecutors said in court Wednesday, but the indictment will remain under seal until arraignment.

Ewa Pienkowski of East Meadow, a longtime family friend, said Zubko-Valva had tried for years to get full custody of Thomas and his brothers Anthony, 10, and Andrew, 6, but authorities didn’t listen.

“I hope the people who failed will be brought to justice,” Pienkowski said. “You want to believe the police and child protective services, but then you look at this case. How can you trust anyone?”

County Executive Steve Bellone, who announced this week that Suffolk’s Department of Social Services would conduct a “top to bottom” internal investigation into how the agency handled Thomas’ case, was visibly moved after attending the boy’s wake.

“It’s heartbreaking,” Bellone said. “It is still hard to comprehend that something like this can happen, especially since the dad is a cop who has sworn to protect the community. It is incomprehensible.”

A Deer Park resident who said her children were removed from her home by Suffolk Child Protective Services said she did not know Zubko-Valva or her children but came to the wake because she could empathize; she, too, was the victim of a broken system. She said social workers didn’t return her calls, and she was frustrated because so many of her court dates had been adjourned because CPS officials weren’t prepared to proceed.

“They are jaded. There is no accountability," said the woman, who asked to be identified as Diana. "They give you the feeling that your case is just one of thousands. I empathize with this mother. Something needs to be done.”

Angelique Graziano of Yaphank, a teacher at the studio where Pollina’s three daughters studied dance, said there was something odd about Valva and Pollina. She said she had known the family for years, but she didn’t know Valva had three sons.

“It was as if they didn’t exist,” her mother Joy Graziano said. “I can’t understand how an adult can do that to a child. He was helpless. These people are animals. Absolute monsters.”

Ray Castillo, a member of the Knights of Columbus Council #4428 in Deer Park, said he didn’t know Thomas Valva or his family, but Castillo said that he and other members were moved by the tragedy.

“We’re here for this young boy who didn’t deserve what he got,” said Castillo, adding that his group, Knights on Bikes, will give Thomas an escort from the funeral home to the church and the cemetery Thursday.

“We’re going to give him a beautiful escort,” Castillo said at the wake at night.

One mourner who said she taught Thomas in preschool remembered him as a sweet child who used to love the song "Let it Go," from "Frozen," the hit Disney film.

“He used to sing it along with me,” said Jana, who asked that her last name remain anonymous.

The funeral Mass for Thomas will be at 9:30 a.m. Thursday at St. Elizabeth of Hungary Roman Catholic Church in Melville.

Many of the people who attended Wednesday’s wake, Zubko-Valva said, vowed to fight for reforms in the wake of Thomas’ death.

“His life is never going to be forgotten,” she said. “His story has affected so many people. People want to fight for justice. They want to make sure another child does not experience what Tommy did.”

NYPD officer and fiancee indicted in boy's death, prosecutors sayAuthorities said Thomas Valva died Jan. 17 from hypothermia after allegedly being forced to sleep in an unheated garage when outside temperatures dipped to 19 degrees. Lawmakers question county review of 8-year-old boy's deathMinority Leader Tom Cilmi said that if he doesn't get answers quickly about the circumstances around Thomas Valva's death, he'll demand an outside investigation. County panel to probe death of boy, 8, from alleged abuseThomas Valva died Jan. 17 in his father's custody after he was allegedly forced to sleep in the unheated garage of his Center Moriches home when the temperature fell to 19 degrees outside.