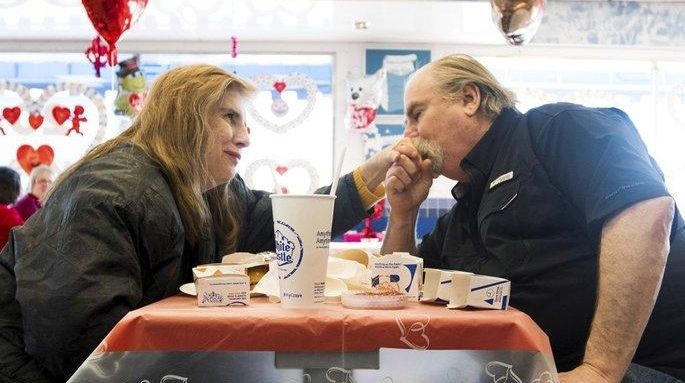 Joseph Ornstein met his wife Maureen back in 1974 at a friend's house, and a few days later, on March 8, he took her on their first date to White Castle. Since then, they've celebrated birthdays, anniversaries and Valentine's Day there as a tradition. On Feb. 14, 2017 we catch up with the happy couple to join them on their Valentine's Day dinner at none other, White Castle. Credit: Newsday / Raychel Brightman

Joseph Ornstein and his wife Maureen have celebrated Valentine’s Day at White Castle every year since 1974 — long before the chain started its annual tradition of transforming from fast food into fine dining for the romantic holiday.

The Patchogue couple met in Queens in 1974, where they had their first date at a White Castle. They married in 1980.

This year at the chain’s Centereach location, Ornstein, 64, ordered regular sliders and his wife, 60, ate cheeseburgers. They shared a Diet Coke with two straws.

“We come here to celebrate our love,” said Ornstein. “You can get a more expensive meal elsewhere, but nowhere will it be better than White Castle.”

The Ornsteins weren’t the only ones showing their love with sliders on Tuesday. White Castles across the country were serving up romantic meals as part of the chain’s annual Valentine’s Day celebration. Long Island locations included Centereach, West Hempstead, Massapequa, Huntington Station, Commack, Deer Park and Brentwood.

Unlike a typical day at White Castle, hosts and wait staff were provided from 4 to 9 p.m. As a special for the holiday, customers could order combo meals with sliders and fries called Love at First Bite and Turn Up the Heat.

“This is the time to show our love for the customers,” said Hilda Gonzales, general manager at the Centereach White Castle, which was fully booked for Valentine’s Day this year.

The location started accepting reservations for the event in November, even though some customers had tried to make them as early as July last year. Around the country, some locations accept reservations as soon as Feb. 15.

Gonzales had about 50 reservations for the night, and expected 187 people overall.

“We are waiting for this occasion,” she said. “Whoever you see sitting down, they have their own White Castle story.”

For nine years, April Aquila, 33, and her husband Mike Aquila, 34, have been coming to White Castle with family once a year, on Valentine’s Day. The chicken, fries and onion rings they ordered were a treat for their 2-year-old daughter Meadow, they said.

“We don’t even have soda in the house,” Mike Aquila said.

Each White Castle in the nation participates, and most are booked, according to Paul Werth Associates, a public relations firm that represents White Castle.

For Joseph Ornstein, the fast-food chain that hosted his first date with his wife can do no wrong. Recalling that date more than 40 years ago, he said he knew then his future was set.

“I knew I’d fall in love with her,” he said. “We emotionally tied the knot over a White Castle hamburger and fries.”

Smithtown comptroller to retire after steering through pandemic
Babylon's proposed Oak Beach water system comes with $4.2M bill for residents
Study to examine cost to connect Great Neck homes to public sewer
1:54
Online instruction has been liberating, and vexing, for students with disabilities
2:49
Projected fatal drug overdoses increased on LI during the pandemic, statistics show
James Angotta, retired NYPD officer, dies at 63
Didn’t find what you were looking for?