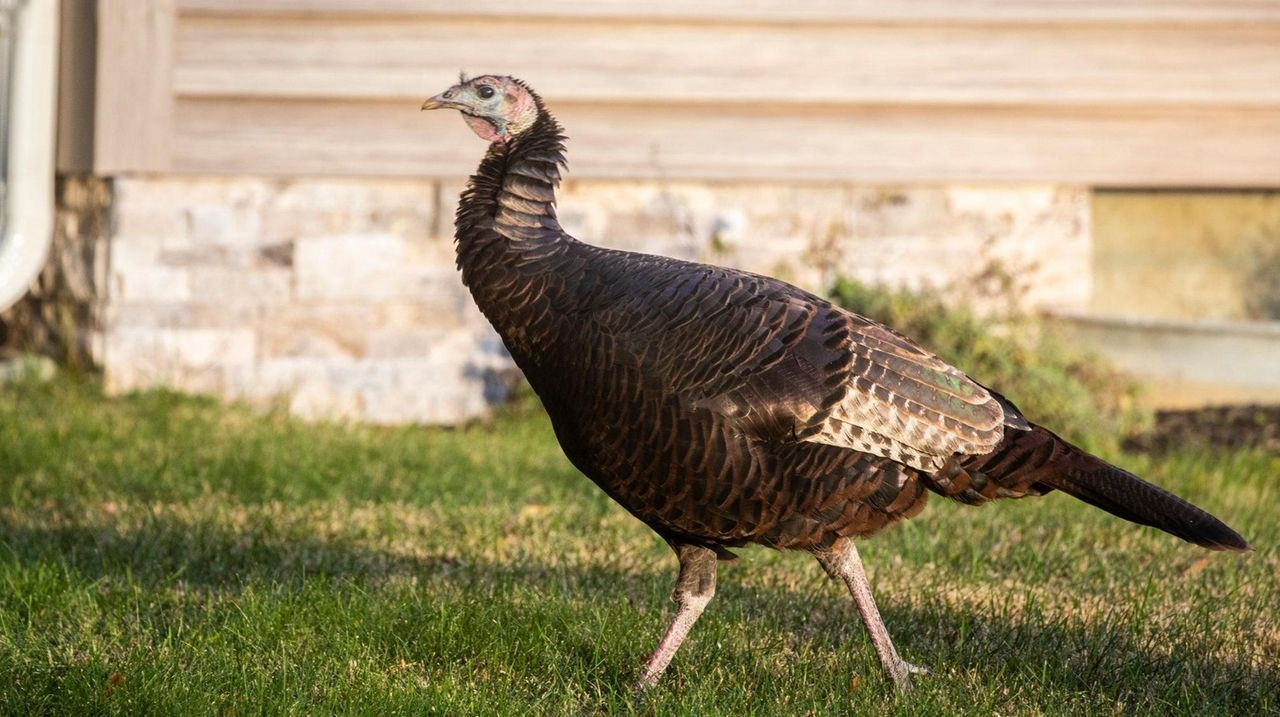 While New York's flocks have declined to 180,000 — down 40 percent from their 2006 peak — Long Island has approximately 6,000, primarily in Suffolk County. That's twice as many as there were on the Island in 2009, according to the state Department of Environmental Conservation.

Conflicts between the birds in the wild and homeowners have flared recently, on Staten Island and in New Jersey's Toms River, though all along the East Coast wildlife experts fear their numbers are falling.

Long Island's wild turkeys are the descendants of a small flock that crossed into western New York from Pennsylvania around 1948 and stayed, according to the DEC. That was a century after farming and overhunting led to their disappearance from New York.

The more recent arrivals thrived, and in the 1990s, the DEC moved about 75 to Suffolk County — from Montauk in the east, to Rocky Point in the north, to Southaven County Park in the south.

"Our estimate was very conservative," says Chip Hamilton, DEC senior wildlife biologist on Long Island, referring to the 6,000 number. "I can't stress enough that for certain species, knowing the total number doesn't mean anything; it is more important to know the trend in a species like turkeys."

On the Island, “We’re seeing a positive trend."

How do wild turkeys survive on Long Island?

These quintessential American birds, contrary to common belief, are quite athletic — and, experts say, hard to hunt because they are so intelligent, have exceptional eyesight and hearing, and dense feathers. Though they don't fly very far, “I’ve seen them fly about the length of a football field," over power lines that are about 80 feet high, says Timothy M. Green, natural resource manager at Upton’s Brookhaven National Laboratory, home to about 350 to 500 wild turkeys. And they can run about 12 mph, the DEC says.

Think of them as winged commuters. Wild turkeys like foraging routes, Green says. In contrast, factory-farm turkeys and their prized white meat are typically too front-heavy to fly.

Turkeys also have wide-set eyes that work separately, giving the birds the ability to see about 270 degrees around them, which helps them spot predators. And, camouflage is apparently well-understood by the birds. “You can see a flock of turkeys moving 10 to 15 feet away in early spring, when the leaves are just starting to come in, and they blend right in,” Green says. “If they don’t want you to see them, in the right conditions … they just stand still. It takes a very keen eye to spot a turkey."

Green jestingly likens them to Michael Crichton’s velociraptors in “Jurassic Park”: The gargantuan dinosaurs are likely modeled on a larger cousin of wild turkeys, experts say.

Like some of those dinosaurs, the birds have a playful side, as anyone who gently tosses a soccer ball by a flock will discover, experts say. And they like to hunt — especially the youngest birds, called poults. “I think part of it is — they see insects moving along, and are excited about them, so they target insects,” including ticks, Hamilton says.

But once turkeys try grasses, berries or nuts, they might not be as keen on grubs, beetles or worms.

“As adults, they say, ‘Hey, I can eat those grass seeds, and they won’t run away,’" Hamilton says.

There are about 180,000 turkeys in New York State, up from 30,000 in the 1970s. Yet the peak was 275,000 in 2006. Blame harsh winters and spring storms, the end of a predator-killing rabies outbreak, and development, which empowers raptors and nest-raiders — skunks, raccoons and possums — that deprive the birds of overnight roosts in old stands of trees.

Aside from those dangers, and hunters, "The only thing that is going to take out an adult eastern turkey is going to be a car," Hamilton says.

Unlike other birds, Toms are absentee fathers. The much-smaller hens, which lay a dozen or so eggs over two weeks that will hatch in 28 days, are fierce protectors. “You can actually walk right up to her before she’ll flush,” says Brookhaven’s Green. “You have to make sure you don’t take that next step that will crush the nest.”

Hens will also feign having a broken wing to lead predators away. Yet 56% to 73% of poults die in their first two weeks, the Pennsylvania Game Commission says.

Rain can indirectly kill hens and poults. “Wet hens may leave a more significant scent trail, allowing predators to be more successful at finding nests,” the commission says. In takes poults about two weeks to grow wing feathers and roost much more safely in trees.

Snow is also a threat: In winter, turkeys can starve if 6 to 8 inches cover the ground for five weeks or longer, keeping them from reaching nuts or grasses underneath.
In the wild, these birds live about three years — though some make it to the midteens, experts say.

If the only place you'd like to see turkeys is on a platter, Hamilton said that removing any source of food usually solves the problem of those lingering on your property. Clapping, banging pots and pans, and spraying a garden hose also help drive turkeys away.

"Once they realize they're in a position where they'll get harmed, in most cases, you can educate the flock and they won't come back," he says.