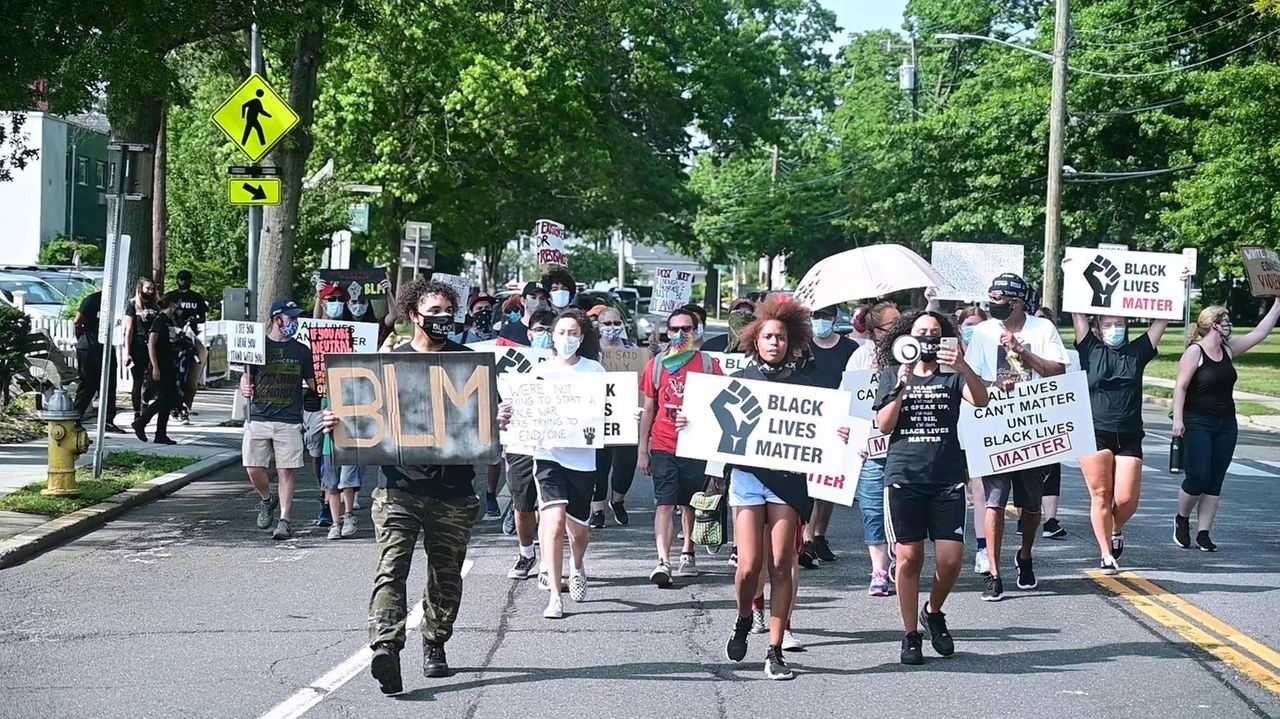 Protestors on Sunday rallied to have the William Floyd statue in Shirley removed, as other demonstrations took place in Amityville, Oceanside and Brooklyn. Credit: Newsday staff

Protesters across Long Island joined in several actions calling for social justice Sunday including a group seeking the removal of the Shirley statue of William Floyd who was a Declaration of Independence signer and slave owner.

Protesters also marched in Amityville and Oceanside on Sunday calling for an end to police violence and systemic racism.

Sunday, more than 75 protesters in Shirley joined together to demand the removal of the Floyd statue.

Desiree Magee, 27, of Shirley, who started an online petition to move the statue to another location such as his former estate, said Floyd shouldn’t be honored at the prominent intersection of William Floyd Parkway and Montauk Highway because he owned slaves.

“He stands for racism,” she said. In the racially and ethnically diverse community, she said, a statue to a slave owner is a “smack in the face” and should be replaced by someone the community could agree on.

Protest organizer Monique Fitzgerald, 41, of Bellport, said: “There was no good slave owner. I’m tired of that narrative being pushed.”

Backers of the statue said Floyd and his family had to flee their Mastic Beach estate to Connecticut for seven years during the Revolutionary War because he was one of four New Yorkers who signed the Declaration of Independence.

“William Floyd risked his life, his property and everything to take a stand,” said Beth Wahl, president of the William Floyd Community Summit, which bronzed and installed the statue at the county-owned intersection in 2013. “Slavery is abhorrent. It’s horrible. Unfortunately at the time, it was not abhorrent.”

The protest, which started across Montauk Highway from the statue, crossed the street to the property. A counterprotester holding an American flag and “Trump 2020 & Beyond” sign climbed up next to the statue. Eventually, protester Clifford Brice of Shirley, holding photos of black men and women killed by police violence, also stood on the pedestal. Brice and the Trump supporter heatedly debated police violence and protests, with the Floyd statue between them, and protesters chanting around them.

William Floyd’s name is on the major north-south parkway in the area and the school district. Magee said they weren’t calling for his name to be removed from those locations, noting he signed the Declaration of Independence.

Deceased Brooklyn artist Santo Matarazzo, who had a summer house in Mastic Beach, sculpted and donated the statue, Wahl said.

She called protesting “their right. It’s not their right to take down our statue.”

Suffolk Legis. Rudy Sunderman (R-Shirley) said he has met at his office with organizers who wanted the statue removed and has more meetings scheduled.

“I don’t feel we should be rushing to any decisions that we should be taking down statues at this time,” he said. “We can’t erase history.”

A spokesman for County Executive Steve Bellone did not respond to a request for comment.

Peaceful protesters have continued to demonstrate nationally and on Long Island following the May 25 death of George Floyd in Minneapolis who died after a white police officer knelt on the Black man’s neck for nearly nine minutes. Activists have also drawn attention to other police-involved deaths, including Breonna Taylor in Kentucky and Ahmaud Arbery in Georgia.

In Amityville, about 50 peaceful protesters lined Broadway on Sunday chanting “Black Lives Matter” and carrying signs that read “Pro Black Does Not Mean Anti-White” and “I See You. I Hear You. I Stand With You.”

In Oceanside, a group of about 30 to 40 protesters marched along the streets chanting and holding signs including one that read: “All Black Lives Matter” and “No Justice No Peace.”

They stopped at a local school and sat on the grass where one protester told the group that slavery has never really ended in the United States, saying people in prison are exploited when they are forced to work for little or no wages.