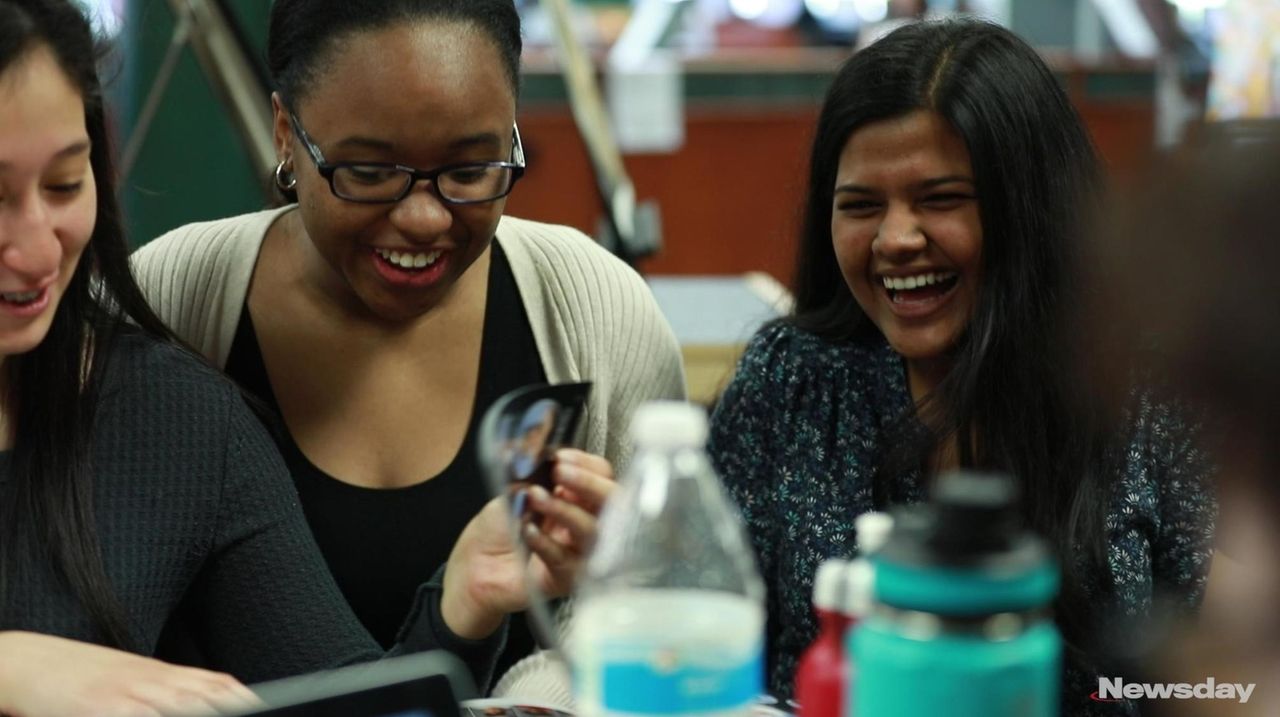 For the first time in its 59-year history the top 10 highest-ranking students at William Floyd High School are all female.  On June 7, 2018, the close-knit group sat down with Newsday and talked about their friendships and more. Credit: Newsday / Yeong-Ung Yang

Beyoncé asked this question on her 2011 album “4”: “Who run the world?” The answer — girls — also describes the top 10 students in the Class of 2018 at William Floyd High School in Mastic Beach.

For the first time in its 59-year history, the school’s 10 highest-ranking students are all female. They are all recipients of the school’s Principal’s Award. Among them are future scientists, aspiring doctors and teachers, a presidential hopeful and a budding humanitarian inspired by Malala Yousafzai, the youngest-ever Nobel laureate.

The top 10 are a tight-knit bunch. They have been part of a group chat since ninth grade with other Advanced Placement students, offering study tips and support whenever needed. When they’re in a room together, they talk quickly and excitedly about just about anything, totally able to keep up with one another as they bounce from topic to topic in conversation. They’re opinionated, especially when it comes to their favorite music — songs by Shawn Mendes and Taylor Swift — and pizza chains — there was no consensus on whether Domino’s is in or out.

Principal Philip Scotto was the first to gather the students and tell them their class ranks.

When Julia Goodwin — eighth in the class — looked around the room, she said she wasn’t surprised to find that they were all girls.

“I didn’t actually think that it was all that unusual,” said Goodwin, 17, of Mastic. “I always sort of thought that it would be all girls because our year is very girl-centric. A lot of the girls in my grade are so intelligent and so awesome.”

Several students in the top 10 acknowledged that they wouldn’t have gotten this far if not for their parents coming to the United States in search of opportunity and education for their children.

Asma Asghar, this year’s valedictorian, came to America from Pakistan in 2010, when she was 10 years old.

“Coming to a new country and learning a new language and adapting to a new culture was a little difficult at best,” said Asghar, 18, of Shirley. “But the Floyd community was very supportive and all the teachers were very helpful. The students were very welcoming, and it was a good experience overall.”

Asghar will focus on diversity and the sense of community within the Class of 2018 in her valedictory address at the June 23 graduation ceremony. She will attend Barnard College in the fall to study neuroscience and human rights, citing Malala — who in 2012 was shot in the head on a school bus in Pakistan by a Taliban gunman and was a co-winner in 2014 (at the age of 17) of the Nobel Peace Prize — as her “number-one inspiration.”

Walking across the stage with her will be Khadija Saad, 17, also of Shirley, and who ranked fifth in the class. Her mother brought her to the United States 10 years ago from Pakistan. Saad’s mother was a doctor in Pakistan, and when they came to the United States, Saad said her mother had to retake all of the tests she’d already passed in her home country in order to practice in Connecticut.

“She is very independent and very hardworking, and I aspire to be like her,” Saad said.

Saad will follow in her footsteps this fall; she plans to study biomedical engineering on a pre-medical track at Stony Brook University.

There are some overlapping majors and universities within the group. Half of the top 10 will continue their education on Long Island in the fall, with three headed to Stony Brook University and two attending St. Joseph’s College in Patchogue.

Like Asghar, Nia Smith, 17, of Mastic, who ranks third in the class, will study neuroscience. Saad and Mastic resident Sandra Vivar Marin, 17, ninth in the class, plan to enter the medical field. Goodwin and Kellin Amaya, who is 17, lives in Shirley and is ranked sixth in the class, hope to become English and special-education teachers, respectively.

The teens do have a range of interests, however, that may take them beyond Long Island. Courtney Cronin, 18, of Shirley, is ranked seventh in the class and will study forensic science at SUNY Alfred State College in Allegany County.

While envisioning their futures, several of the girls singled out one member of the top 10 whose ambitions could land her in the White House.

Mastic resident Ferjana Jahan, ranked fourth in the class, dreams of working in Washington as a lobbyist or in some other political capacity. She developed an interest in politics after being elected student council president last year and taking an AP U.S. Government course this year.

Jahan, 18, said her family is what has kept her motivated over the past four years. Her parents came to the United States from Bangladesh, “for the sole purpose of making my life better, my sister’s life better, so we could get an education,” she said.

As for a potential presidential campaign, she said, “It’s mostly a joke, but who knows in the future? I was just like, you know what? When people ask me what I want to be in the future, I say, I’m going to be the president of the United States.”

Salutatorian Michelle Lara, 18, of Shirley, said that she thinks she will see a female president in her lifetime, and has high hopes for Jahan.

“Sometimes you do have to think a little bit with your heart and not just your mind, and I feel like a female president might be able to bring that out in others as well as do that well herself,” said Lara, who plans to study biology at Harvard University in Massachusetts.

What’s next for the top 10? Sofia Galvez, who is 10th in the class, said she is hopeful that they will start truly making their “mark on the world” once they enter college in the fall.

“I’m just extremely proud that we’re all 10 women who have made it,” said Galvez, 18, of Mastic. “I think that oftentimes people think that men are stronger than women. Even in 2018, they treat us very unequally. But I hope to show that we can do the same that men do, and sometimes, we do it better.”