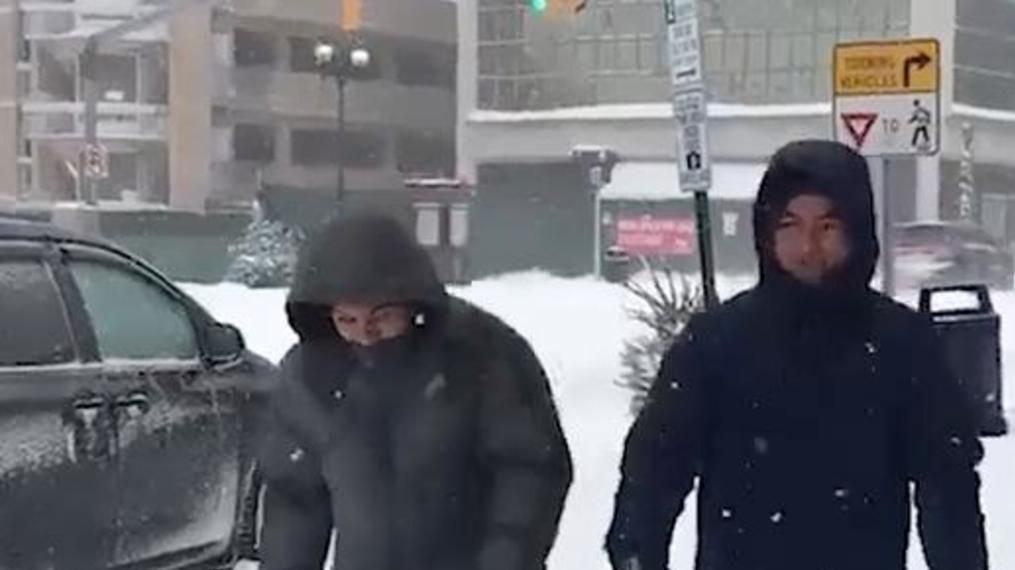 More than a foot of snow fell at Long Island MacArthur Airport on Thursday, Jan. 4, 2018, according to the National Weather Service. Here is a look around Long Island. Credit: Newsday staff

A powerful coastal storm that paralyzed much of Long Island Thursday with howling winds and more than a foot of snow across parts of the region was expected to leave behind a messy commute Friday morning and a spell of bitter cold.

Even with predictions that Long Island’s first winter storm of the new year would bring with it blizzard conditions, the nor’easter that arrived in the predawn hours Thursday exceeded those expectations.

Gusts of at least 50 mph lashed Suffolk and Nassau. Wind-whipped snow piled into heaping drifts and spurred dangerous white-out conditions. The sheer size of the storm made the job of work crews already well-versed in handling winter weather that much harder as they battled the elements to get roads safely navigable.

“It’s a disaster out there,” Suffolk Executive Steve Bellone said at one point. “It is difficult for the plows to operate.”

In the city, schools shut down, many employers sent workers home early, and the Correction Department struggled to keep at least one jailing area at Rikers Island warm.

Nassau and Suffolk police reported dozens of accidents and stranded motorists, some of whom slid off roads and got stuck in snow piles. Gov. Andrew M. Cuomo and local officials declared a state of emergency, area airports ground to a halt, and the U.S. Postal Service stopped delivering.

Police in Suffolk, which got the brunt of the storm, commandeered repurposed military vehicles, including Humvees, to pull stranded motorists to safety, and called in gang units and plainclothes officers to precincts for extra coverage. Marine Unit officers — schooled in patrolling area waterways, kept watch over the Sunrise Highway and the Long Island Expressway.

Across Long Island, New York City and the metropolitan region, public and private schools, as well as many universities and colleges, were closed Thursday.

Many public schools on Long Island — which educate some 442,000 students in 124 districts — were still mulling over whether to reopen on Friday while others said they would remain closed due to icy roads and the frigid temperatures forecast.

Tens of thousands of students in private and parochial schools also stayed home.

Asked about potential school closings on Friday, Cuomo said: “I think you have to wait and see what the condition is and what the temperature actually does tonight and what the roads look like.”

As Long Islanders started digging out of the snow, they braced for a weekend of the lowest temperatures and wind chills so far this winter.

Temperatures were expected to drop to a low of 10 degrees overnight into early Friday, with the wind chill making it feel more like minus 5 to minus 15, the National Weather Service said.

The sun is expected to make a return Friday but it won’t bring any much-needed warmth. Forecasters said the daytime temperature is expected to climb just four degrees from the nighttime low, to a high of 14 degrees.

Conditions get even worse Saturday. The weather service predicted an overnight low of 5 degrees, with the wind chill pushing it down to minus 10 to minus 15 degrees. The high Saturday is expected to be around 12 degrees.

“The weather will get colder, which will compound the situation,” Cuomo said. He noted that snow-removal chemicals such as salt and calcium chloride may not be effective when temperatures dip into the single digits or hover at 10 to 12 degrees.

Forecasters had warned of a nasty Long Island snowstorm, with Suffolk expected to be hit the hardest. And while the nor’easter delivered as advertised in Suffolk, with nearly 16 inches notched at Long Island MacArthur Airport in Islip, it packed a more powerful punch in Nassau than predicted.

The weather service had initially forecast 9 to 12 inches in Suffolk “with locally higher amounts.” Various forecasts had Nassau getting anywhere from 3 to 6 inches or 8 to 10 inches of snow. By Thursday night, Baldwin had recorded more than 15 inches of snow with Carle Place reporting nearly 14 inches

Breda Connolly, 48, an accountant in midtown Manhattan who lives in Westbury, said she underestimated the storm.

The mother of five made it to her office by 9 a.m. By 1 p.m. her boss told everyone to go home.

“I was terrified they would shut down the train service or something,” she said.

The snow kept coming across both counties for several hours more, tapering off by late afternoon.

A blizzard warning was to remain in effect for Suffolk until 1 a.m. Friday.

Meteorologists said the storm turned out worse than anticipated for two reasons: The tempest tracked farther to the left as it churned north, and then slowed down.

Some called it a “bomb cyclone,” a nickname for a storm that rapidly intensifies as pressure drops at least 24 millibars over 24 hours.

At MacArthur, 3 inches of snow fell between 8 and 9 a.m., the weather service said. The airport was scheduled to be open Friday, said airport Commissioner Shelley LaRose-Arken.

Between 6 and 9 a.m., as heavy snow and high winds of more than 35 mph teamed up, visibility dropped to between a quarter mile and zero in Suffolk, the service said.

The weather service did not officially classify the storm as a blizzard because it did not meet the definition.

Blizzard conditions, which are unrelated to snowfall amounts, occur with three hours or more of sustained winds or frequent gusts of 35 mph or higher, and “considerable falling and/or blowing snow,” bringing reduced visibility frequently of less than a quarter of a mile, the weather service said.

Whatever the official designation, for many commuters the day was nightmarish. The Long Island Rail Road had systemwide delays averaging 30 to 45 minutes by early afternoon, with service suspended on some lines just before noon.

Cuomo did not shut down the Long Island Expressway or other major roads, but like other officials, urged people to stay off them. As of 8:45 p.m. Thursday, electricity service had been restored to 97.4 percent of the 21,694 customers who had lost power, according PSEG-Long Island.

A spokeswoman for the city Department of Correction, which runs the jails, said Thursday night that “we have had to address one housing area in one facility that registered between 64 and 69.8 degrees during one of our regular temperature checks.” The number of affected inmates and length of the temperature issue was not provided.

See LI school closings, delayed startsExplore our listings of delays and closures to see what places of learning or programs are affected. Local forecast Storm takes out power for more than 21,000A day of unrelenting winds mixed with heavy snow left more than 21,000 customers without ... Snowstorm stops mail service on LI, for a dayFederal Postal Service officials suspended mail delivery to Long Island homes and businesses late Thursday ...