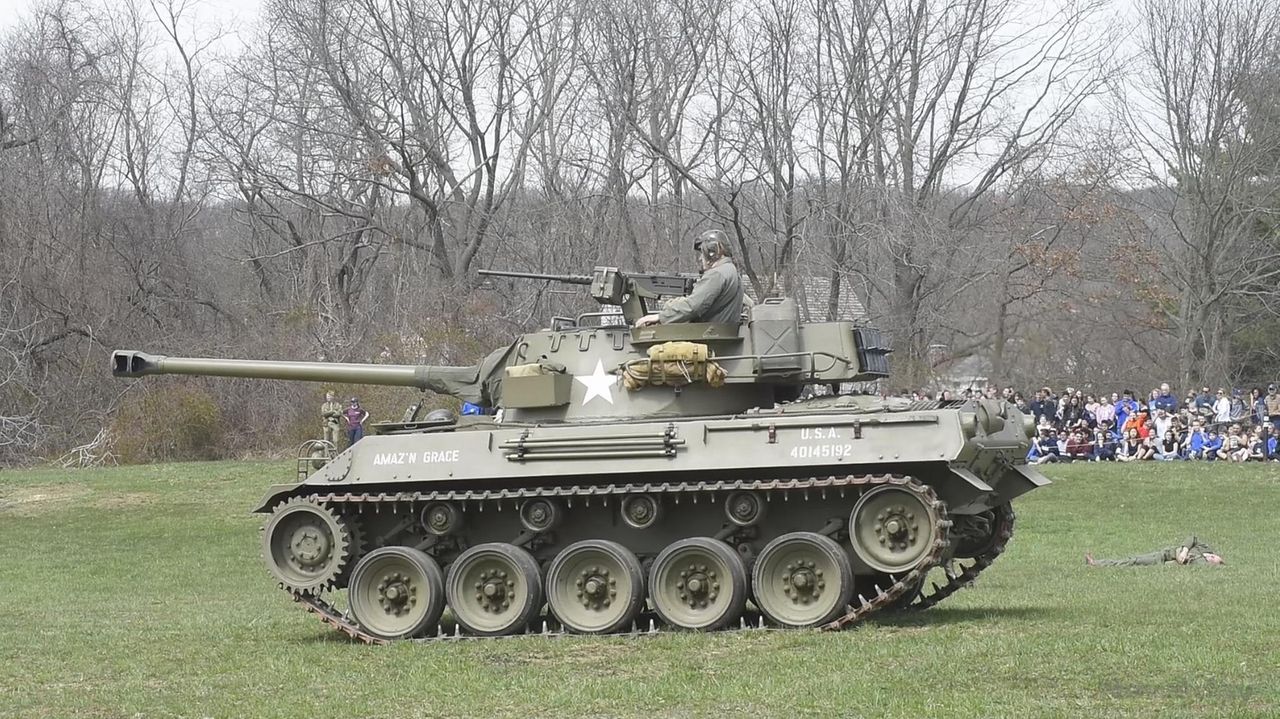 Students from all over Long Island gathered at the Museum of American Armor at Bethpage Friday, to learn about the lessons of World War II, including the liberation of the Nazi death camps in 1945. Credit: Johnny Milano

When the tanks opened fire, the hundreds of students gasped. In an instant, a sprawling grassland in Old Bethpage became a smoky field of war.

One G.I. fell to the ground, cut down in the faux exchange of fire. A medic approached, bending over him. Minutes later, the medic helped the soldier to his feet.

A cheer went up. The students had learned a lesson, and this time it didn’t come from a textbook.

World War II, so pivotal in American history but so long ago, was real and it affected people very much the students’ own age.

On Friday, the day after Holocaust Remembrance Day, students from 10 schools across Long Island saw many of the real dynamics of war, up close.

Under a glaring sun, the students watched the mammoth tanks advance. A few ate the creamed chipped beef on toast that the soldiers had eaten, and they even saluted a drill sergeant barking orders at them.

The immersion into World War II took place on the green field inside Old Bethpage Village Restoration. For two hours, the middle and high school students watched re-enactors — many dressed in drab green combat fatigues — act out those times. The event was sponsored by the Museum of American Armor and the Nassau County Department of Parks, Recreation and Museums.

Dressed as a military cook, replete with a chef’s hat and white apron, museum volunteer Joseph Napoli explained to the students that the war helped bring into fashion the dehydration of food. Another byproduct of the war: M & M candies.

“Most of the soldiers were about your age, and they wanted their chocolate,” Napoli explained to students of New Hyde Park’s Herricks High School. “But the chocolate kept melting. So the company invented a candy that melts in your mouth, not in your hands.”

Talking to the students about the Holocaust, Helen Turner did her best to bridge the gap between the victims of the Nazi concentration camps and today’s generation toting iPods, backpacks and streaming television.

“Imagine you had to live on three Oreo [cookies] a day,” said Turner, the director of youth education at the Holocaust Memorial & Tolerance Center of Nassau.

“You had to wear this,” she said, “and if you took it off, not only you but your family might be killed.”

While the pageantry of advancing tanks and troops offered the best viewing of the day, former G.I. Seymour Kaplan, 91, provided perhaps the event’s most poignant moment. He was among the first soldiers to liberate the Dachau concentration camp.

Kaplan showed the students a picture of himself during the war, when he looked a lot like them. He spoke of the horrors he witnessed at Dachau. One he will never forget is when he helped unlock train boxcars filled with Jewish prisoners. They had been kept there for two weeks.

“When I opened the boxcar, people oozed out. No one was alive,” said Kaplan, who lives in Brooklyn. “They had been pressing against the door and they just fell out.”

The students, listening to him, sat speechless.