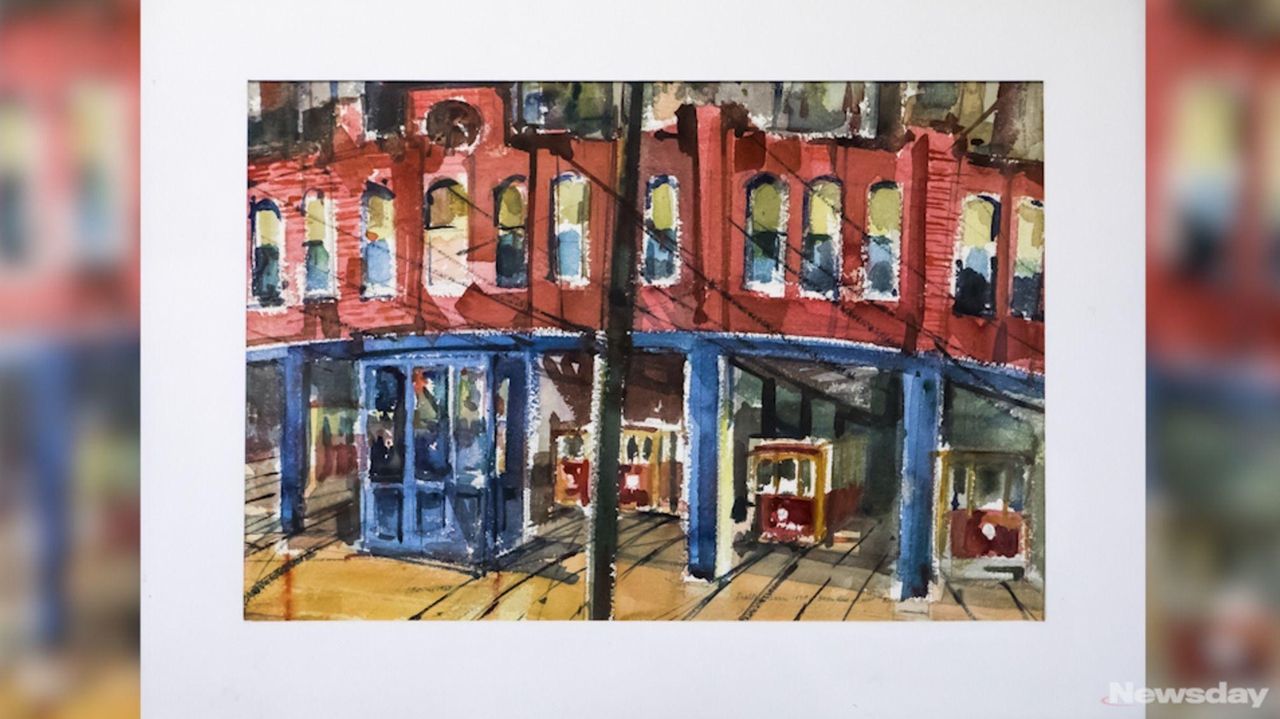 Creighton Berry, a World War II veteran and a nationally recognized artist, author and Quiogue resident, on Monday, Sept. 5, 2017, gave Newsday an inside peek into his studio and his lifelong career creating art.   Credit: Marisol Diaz

That is true, to put it mildly. And impressive, considering that his life is almost midway through its ninth decade and is still generating experiences.

The most recent was his Aug. 24 designation as a Hometown Hero as part of a Westhampton Free Library initiative. Berry received a proclamation and an American flag that was flown over the library in his honor. Officials lauded him as a “pillar of the Westhampton Beach community.”

On Nov. 11, Veterans Day, Berry — who turns 94 on Sept. 15 — will represent WWII vets when the American Legion and Veterans of Foreign Wars posts honor veterans at a benefit concert at the Westhampton Beach Performing Arts Center.

Berry, a nationally recognized artist, author and Quiogue resident who for many years was the executive art director at the former Gimbels department store, has been drawing for most of his life. His body of work — which he is still adding to — includes watercolor, oils, pen and ink, and acrylic to paint collages, landscapes and still lifes.

“I was drawing from high school,” said Berry, who was born in Harlem, grew up in the South Bronx and went to James Monroe High School. He said he was influenced by the 1930s cartoonist E. Simms Campbell. “It was something I picked up as a child from looking at his work,” Berry said. “I’d draw anything. Look out the window, draw the backyards; I drew the streets. I was just interested in drawing.”

Berry’s “series of interesting experiences” began in earnest in 1943, when as a 19-year-old his art studies at the Pratt Institute in Brooklyn were interrupted by the draft. He was assigned to a combat engineer company at Fort Dix in New Jersey. Because of his artistic talent, the Army Air Corps assigned him to a camouflage unit at Mitchel Field in Garden City. The segregated military was also confused about his ethnicity.

“The Army assumed I was a white student,” Berry recalled. “During a field exercise the base commander looked at me and stopped the drill. Early the next day, at 3 a.m., I’m sleeping. Two MPs [military police] come into my barracks. They make me get dressed and take all my belongings to an African-American transportation unit.”

That unit was heading overseas, so Berry was transferred to another all-black unit at Langley Field in Virginia. He was going to the South for the first time, assigned to an Army Air Corps Signal Corps Battalion. There, he said, his unit was responsible for the morale, well-being and entertaining of the troops.

“The unit was made up of musicians and singers and clerks to run the enlisted men’s service clubs,” Berry said. “I got to shake hands with [then heavyweight champion] Joe Louis; he was one of our [African-American] heroes.”

It wasn’t long before another officer took note of Berry, but this time for his skill with a paintbrush. “The colonel in charge of the Signal Corps Unit finds out I’m an artist,” Berry recalled. “He has me transferred to the Special Services Unit outside Detroit. He wants me to make a mural in the officers’ club.”

Berry said he painted the mural in five months, depicting the Signal Corps’ activities in battle. The colonel liked it so much that he made Berry a Special Services specialist. The Special Services Unit was in charge of entertaining the troops and overseeing the USO, which provided entertainment, meet-and-greets with well-known people and other activities for troops. Previous entertainers have included Bing Crosby, Marilyn Monroe, Sammy Davis Jr., Loretta Lynn, Bob Hope, Katy Perry, Stephen Colbert, Sheryl Crow, Diahann Carroll, Marlene Dietrich, Kevin Costner and Phyllis Diller.

Berry also used his drawings to train ground personnel to recognize enemy aircraft and differentiate them from Allied planes. And he acted as a liaison to the towns and communities near the bases he was assigned to.

Things changed when Berry’s unit was transferred to an Army base in Walterboro, South Carolina. “All the sad and horrible experiences of the world came into my life,” Berry recalls in his memoir, “Is this my country ’tis of thee sweet land of diversity?”

When returning pilots from the elite Tuskegee Airmen bomber squadron were being resettled after their service in Europe and encountered discrimination in Walterboro, Berry was involved in efforts to diffuse their anger over being treated more harshly than prisoners of war who were being held at the base. He himself had to be guarded by a shotgun-toting white farmer when he was harassed by white youths while waiting for a bus after eating in a segregated area of a diner in Columbia, South Carolina.

In his memoir, Berry questions the status of the nation’s diversity. “I explore my true relationships in America as a citizen born at a certain time and a certain place into a certain tribe.”

Berry left the Army as a sergeant in 1946. He returned to New York and finished his studies at Pratt Institute and the New York School of Visual Arts. He sought work as an advertising designer, but like the military, the country was also segregated and there was no work for him on Madison Avenue.

Eventually, a fellow Pratt graduate offered him a job. “When I got there he’s shocked, but he said, ‘I promised you a job because you’re a Pratt graduate no matter what you look like.’ ” But Berry said his employer first asked his staff “if it was all right to hire a black guy.”

For 20 years, Berry was on staff at several major department stores. He worked his way up to executive art director at the former Gimbels department store in Manhattan, then offered the stores his services as a freelance illustrator. He retired in 1988.

Berry said he expressed himself by “making his mark on paper and canvas.” Still, he never dreamed that art would influence every aspect of his life. He helped establish an arts cooperative in Queens in the 1980s to help African-American artists hold exhibitions and sell their works. He also helped create the Edler G. Hawkins Foundation, which supports black cultural institutions and memorializes Edler Hawkins, a Presbyterian pastor, moderator and Princeton professor who mentored him and others. In 2005, Berry received the Town of Southampton’s Citizen Achievement Award for his “strong commitment to the people and principles” of the town, officials said. “You truly make a difference in the quality of life of young people in our community . . . Because of you they get the attention they deserve.”

His works, which are sold at his online gallery, creightonberry.imagekind.com, can also be viewed on Facebook.

When he steps away from his artwork, he is likely on the tennis court. Berry, who was widowed when his first wife, Norma, died in the 1980s, remarried in 2000. He and wife, Claire, 90, also a widow, were wed when he was 76 and she was 73. Berry has two daughters: Andrea Berry, a journalist, and April Berry, a former principal dancer with the Alvin Ailey dance company. His father, Otis, was a World War I vet.

Berry said his mantra is “stay in motion.” The couple both attribute their longevity to genes and living in their own home. Berry is active in a tennis club whose members range in age from 70 to 90. “That’s how I keep in shape,” he said. His wife concurs.

“We haven’t been sitting still,” she added.

Except when the artist is at work.

In essays, words and paintings, Creighton Berry’s advocacy of diversity resonates through his memoir, “Is this my country ‘tis of thee sweet land of diversity?” and a book he illustrated, “A World of Prayers.”

An excerpt from the memoir reads: “May earth who bears mankind, each different grouping maintaining its own customs and its speech yield up for me a thousand streams of treasure, like a placid cow that never resists the land.”

The memoir also records scenes from Africa, India, Asia, Europe and other places around the world that Berry and his wife, Claire, visited. “We have been to the Amazon,” she noted. A photograph shows Berry, who is 6-5, bending over backward in an attempt to kiss the legendary Blarney Stone in Ireland.

In “A World of Prayers,” authored by his daughter Andrea and illustrated by Berry, he interweaves with his art interfaith messages and prayers from Catholicism, Islam and other faiths around the world.