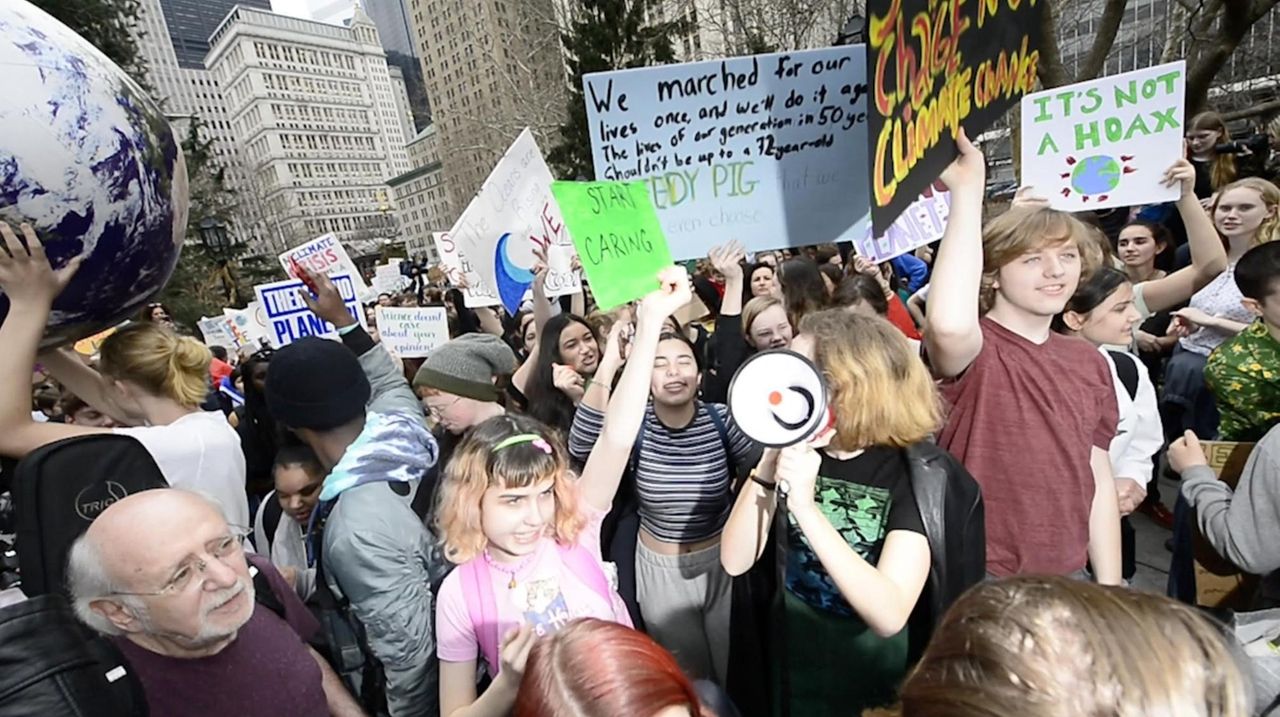 Children from Youth Climate Strikes gathered Friday at City Hall in Manhattan as part of a day of strikes across the country, to call for what organizers said was a “fair and just transition to a 100 percent renewable economy,” and to stop the fossil fuel industry from building more infrastructure. Credit: Todd Maisel

Long Island high schoolers alarmed by the rapidity and destructiveness of climate change joined mothers and other activists in Mineola on Friday, one of the numerous Youth Climate Strikes taking place around the country and the world.

Some of the approximately two dozen activists held signs depicting the Earth falling into a blazing fire and questioning why they were studying when there was no future — and no planet B.

Amelia Medved, 17, a senior at Syosset’s Our Lady of Mercy Academy, said she and several fellow students planned to take part in one of the New York City events later that afternoon at Columbus Circle.

The imperative, she said, “obviously is preventing climate change issues before they become unfixable.”

Emma Egan, 17, a classmate, said she hoped the United States would rejoin the Paris Agreement to battle global warming that  President Donald Trump is exiting.

Jaime Jordon, 38, of Rockville Centre, was accompanied by her youngest three children.

“I have four kids under six — I want radical policies on climate change immediately,” she said.

Stopping the planet from warming and the seas from overflowing — crucial threats on Long Island — could mean enduring some growing pains, she said.

The goal of Friday’s youth strike — one of a series of protests planned for this year — is a “fair and just transition to a 100 percent renewable economy,” and stopping the fossil fuel industry from building more infrastructure, organizers said.

Climate change — pinned on fossil fuels and blamed for extreme weather, including superstorm Sandy, which brutalized Long Island in 2012 — and rising seas require much more sweeping actions than seen so far, they said, urging Congress to enact the Green New Deal to transition to renewable energy.

A number of supporters said they hoped the State Senate, now led by Democrats, will enact renewable energy measures, including the Climate and Community Protection Act that was blocked by the chamber’s previous GOP leadership.

Ryan Madden, 27, of Astoria, who is a volunteer with Sunrise Movement LI, said older generations who failed to safeguard the planet now must heed younger generations.

Ramona Massachi, 40, of Roslyn Heights, who came with her 12- and 10-year-old son and daughter, said she came for the next generation.

She said: “I’d like to see an environment that’s clean and sustainable that relies on wind and solar and that eliminates plastic.”