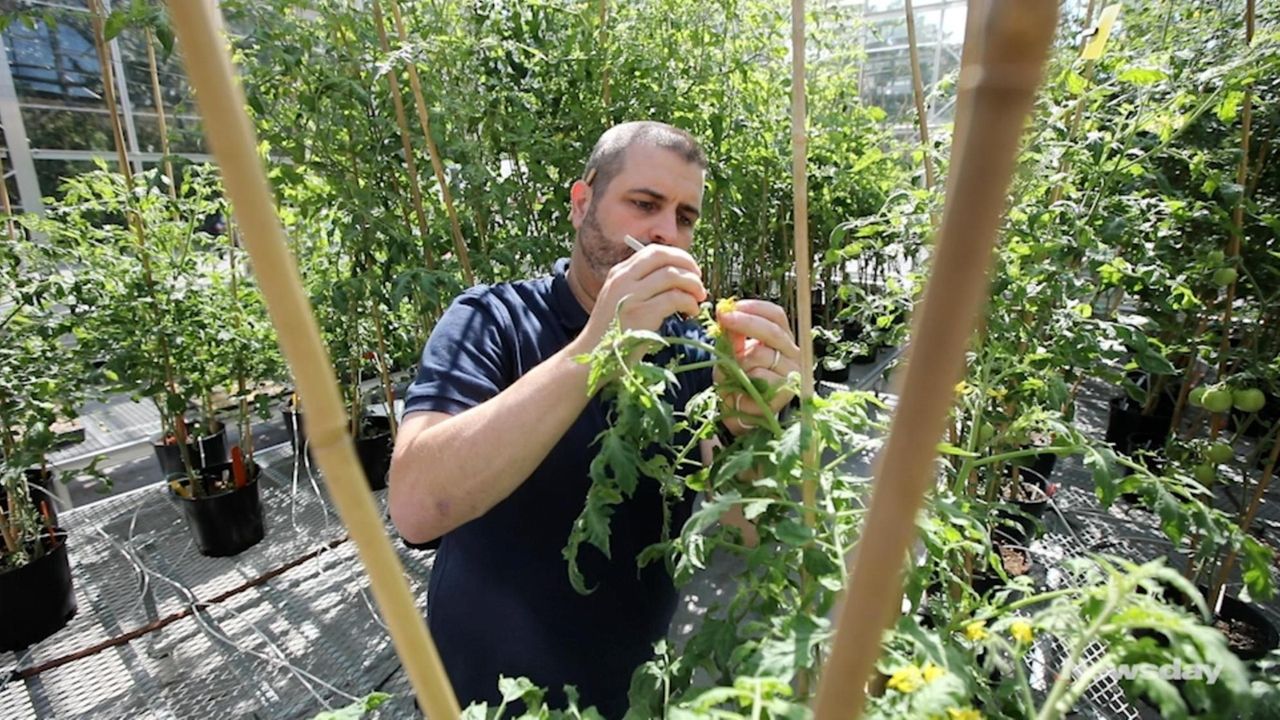 Zachary Lippman, a scientist at the Cold Spring Harbor Laboratory, was named one of the MacArthur Foundation fellows. On Wednesday, Lippman talked about his research, which he said could unlock the hidden promise of crops. Credit: Barry Sloan

Zachary Lippman was named Wednesday by the MacArthur Foundation as one of 26 new fellows, chosen because their exceptional creativity and record of important achievements, the nonprofit says, hold the promise for more of the same.

Lippman, 41, is a scientist at Cold Spring Harbor Laboratory. "It's really wonderful news and great for the field I'm in," the father of six said by telephone.

By unmasking the genes governing how tomatoes grow, flower and produce fruit, Lippman identified broad principles that also control other plants — and could be modified to help them grow more swiftly and more productively, thus feeding more people, experts said.

Gene editing technology enables Lippman to tremendously accelerate what plant growers have been doing for centuries, ever since the first tomatoes arrived in Europe from the Andes in the 16th century, scientists said.

The first tomatoes looked and tasted nothing like today's, of which there are countless varieties, all laboriously created the same way people created a multitude of dog breeds from the wolf.

Lippman says his research could unlock the extraordinary hidden promise of crops — including pearl millet and other African grains, chickpeas and soybeans. "It's basically all major and minor crops that have potential," he said. Referring to the increased yield of his lab tomatoes, he said: "From a farm perspective, anything above 5 to 10% is astronomical; in some cases, we are pushing beyond 30%."

Increasing crop yields safely, while offering options to animal-based proteins, whose production is energy-intensive and can be polluting, has become imperative, advocates say.

With gene editing, Lippman said: "It's not bending the rules, or breaking the rules, it's about trying to understand the principles of the rules, using all that knowledge to address some of the most urgent problems we have in agriculture."

None of his research, he said, involves previous ways of increasing harvests, namely pesticides and insecticides.

"It's not just about feeding humans soybeans and corn," Lippman said, "it's also about increasing the diversity of the crops we eat."

Rob Martienssen, a CSHL professor and colleague, said: "He can start to make designer plants and fruits, and I think that is a very exciting application for indoor farming."

Energy-saving vertical farming, which began in Japan and is spreading slowly in this country, could benefit from Lippman's discoveries, Martienssen said. They could, for example, make it easier to grow tomatoes indoors, on shelves, in such carefully regulated environments that no pesticides or insecticides are needed.

"This could lead to improved quality and other traits as well," said Martienssen, concluding: "There is really a huge opportunity here."

Lippman's father, Bruce, 72, of Orange, Connecticut, said he and his wife, Sharon, were speechless when they learned of the grant. "We're very proud of him, and he's always remained very humble."

"This has been his passion since he was a boy, growing things and seeing how they grow and the way they grow is what he is all about," he said. Not every childhood experiment worked out, the father said, recalling a cork hitting the kitchen ceiling from a baking soda-in-a-bottle episode.

"He loves his work, he doesn't consider it work," he said, noting the family was equally proud of an older daughter and son.

The foundation was created by John Donald MacArthur, who once owned the largest private U.S. insurer, and his wife Catherine Teresa MacArthur, his partner in life and business, its website says. The grants are partly focused on what it calls finding solutions to intractable problems.

Lippman, who said his he interrupted his wife, a dentist, in midprocedure to tell her about the award, said they have discussed possibly funding small programs to inspire middle-schoolers to embark on careers studying the wonders of plants.

His fellow grant recipients from around the nation mostly excelled in art, law, scholarship and science. Marine scientist Stacy Jupiter, 43, of Suva, Fiji, was the only overseas recipient.

Visual artist Jeffrey Gibson, 47, and writer Valeria Luiselli, 36, round out the honorees from New York State.