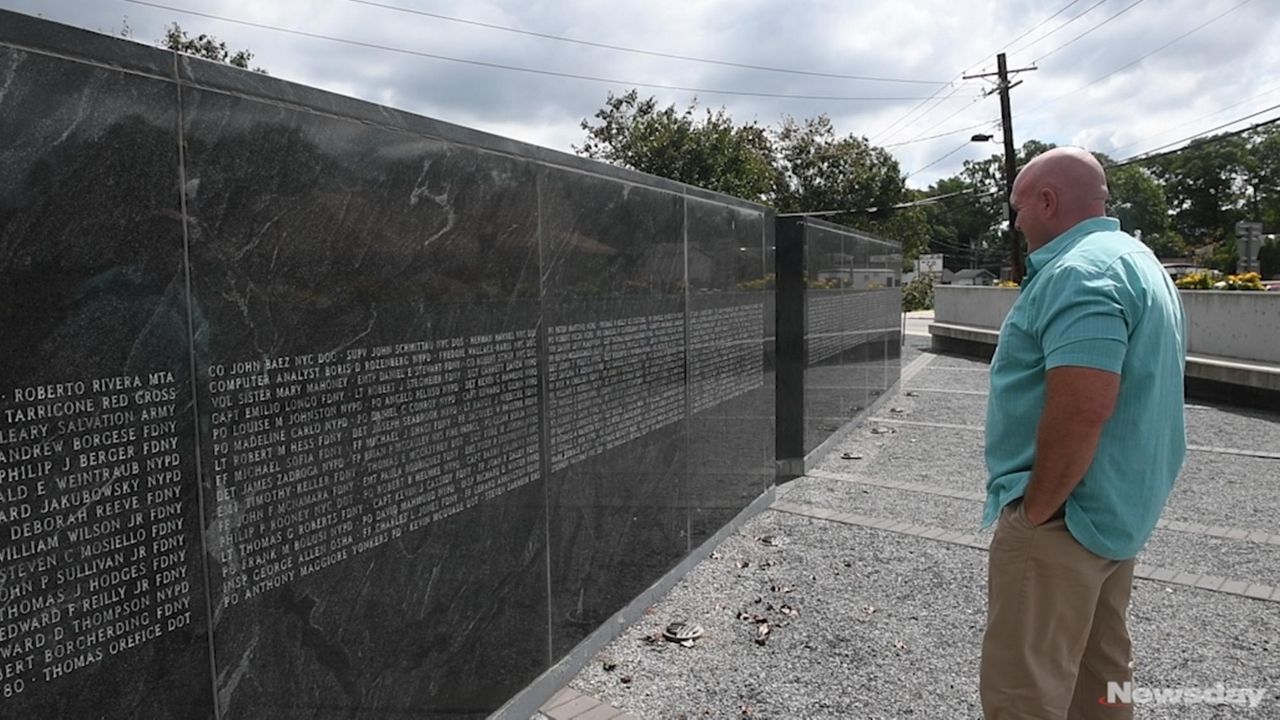 The day after terrorists attacked the World Trade Center on Sept. 11, 2001, former NYPD Officer Tom Wilson joined thousands of first responders in searching for survivors at the lower Manhattan site. Wilson, of Bellport, now 48, was diagnosed with cancer in 2008 and is among the thousands of first responders still battling diseases that doctors with the World Trade Center Health Program said were linked to exposure to toxic fumes and dust at Ground Zero.  Credit: Newsday / Alejandra Villa

He spent weeks digging through the ruins at Ground Zero and sorting debris at the Fresh Kill landfill on Staten Island. Now he’s sick, diagnosed with cancer in 2008.

“I had half my tongue cut out,” Wilson said in a recent interview.

The 48-year-old from Bellport is one of thousands of first responders and rescue workers who, a decade and half after the Twin Towers fell, are battling diseases that doctors with the World Trade Center Health Program have associated with exposure to toxic fumes and dust at Ground Zero.

Many are living lives of disability and facing an uncertain future. Others know their fate all too well. Soon, they will join a burgeoning roll call of those whose dedicated service in the days after the nation’s worst terror attacks will likely cost them their lives.

This week, 156 names will be added to the memorial walls in a Nesconset park, bringing the total number of first responders who died from illnesses linked to their work at Ground Zero to more than 850, according to John Feal, a 9/11 first responder and president of the FealGood Foundation.

The three walls inside the 9/11 Responders Remembered Park were erected to honor their service.

“I find solace that those names are etched and they’ll be there forever,” Wilson said. “But at the same time, I find it disturbing that it’s just growing and growing.”

Here are the stories of three first responders from Long Island whose lives and the lives of their loved ones have been forever altered by their work in the days after 9/11.

These days, Tina Tilearcio rarely leaves her husband’s bedside. She times her errands and breaks to coincide with his naps.

“I ran to the beach twice when I knew he was sleeping and he wasn’t going to get up,” said Tilearcio, of Massapequa Park.

In the finite amount of time she has remaining with her husband Robert Tilearcio — be it a day, a week, or a month — Tina Tilearcio wants to spend every minute of it with the man she fell in love with more than three decades ago.

Robert Tilearcio, 58, a New York City firefighter, is dying of brain cancer, a disease connected to his work turning over debris searching for survivors and remains in the days and weeks after the attacks on the World Trade Center.

Rounds of radiation and chemotherapy after surgery to remove the tumor kept the disease at bay for more than two years. But on July 11, doctors at Memorial Sloan Kettering Cancer Institute in Manhattan told Robert Tilearcio there was nothing else they could do to treat his cancer — glioblastoma, a fast-spreading malignancy.

On the Tuesday when terrorists crashed two commercial planes into the Twin Towers, Robert Tilearcio and fellow firefighters at Engine 266 in Far Rockaway drove toward the Lower Manhattan site. He spent two days looking for survivors and searching for remains of fellow firefighters and the men and women who perished when the buildings collapsed.

“He didn’t have any masks, nothing,” said Tina Tilearcio.

For at least a month after that, Tina Tilearcio said her husband worked 24-hour shifts, came home for about eight hours, and returned to Ground Zero.

“Just enough time to sleep, shower, and go back,” she said.

For more than a decade, Robert Tilearcio continued to work, switching to light duty whenever symptoms of his growing list of ailments, including gastroesophageal acid reflux, or GERD, and difficulty breathing, prevented him from fighting fires.

Then, on April 29, 2015, Robert Tilearcio came home from work, mowed the lawn and showered. He and his wife, a real-estate agent, were about to leave to show houses to prospective buyers.

“And, all of a sudden he screamed from the top of his lungs, and threw his hands up in the air, ‘Oh my God. Oh my God’, as loud as he could,” Tina Tilearcio recalled. “He did like a ballerina turn. I managed to grab him by his pants and eased him down so his head wouldn’t hit the ceramic tiles.”

At St. Joseph’s Hospital in Bethpage, doctors found a tumor the size of a chestnut on his brain. The official diagnosis came on May 8, 2015.

“They said he had 18 months,” Tina Tilearcio said.

Several weeks ago, Robert Tilearcio, who had been receiving end-of-life care at a hospital, returned home.

When his daughter came home from work, they sometimes told jokes or watched recordings of Robert Tilearcio performing on stage when he was a student at Stand-Up University, a comedy school in Bellmore.

“She plays her music and we dance around,” Tina Tilearcio said.

“I wish that somebody out there could find a cure, and a miracle could happen,” Tina Tilearcio said.

When Tom Wilson learned he had cancer in 2008, the father of four young boys had just welcomed a newborn daughter into the world.

“I said I could die from this,” said Wilson, a former New York City Police officer who is now working for the Suffolk County Police Department.

Look back: LIers who lost loved ones reflect on the 10th anniversary of 9/11 Newsday reached out to the families of every Long Islander who lost a loved one on Sept. 11, 2001. This is a compilation of interviews made during the year leading up to Sept. 10, 2011. (Credit: Newsday Staff)

Although currently cancer-free, Wilson continues to struggle with the side effects of the radiation used to treat his cancer and the occasional scare that the disease might return.

“One year, my tongue blew up to the size of a lemon. I couldn’t breathe,” Wilson said. “Over the years, I get these flare-ups. I can’t swallow.”

One such episode in December 2016 was so bad he couldn’t open his mouth or move his jaw, Wilson said.

“Radiation not only kills the cancer cells, but it kills the good stuff around it,” said Wilson. “Basically, certain areas of my jaw [are] turning into sawdust.”

Wilson is taking medication that helps change the viscosity of his blood.

“Hopefully that slows it down,” Wilson said. “But I got to be careful with the jaw. It’s very fragile.”

So, wrestling with his four rambunctious sons and daughter, which he used to love to do, is out of the question.

“I got to limit my physical activity. That takes a toll,” said Wilson. “I try to put up a front because you don’t want to bring your kids down.”

Wilson’s teeth are beginning to fall out, but implants are not possible because he said the blood vessels in the jawbone don’t regenerate.

His fear, Wilson said, is the day when the jawbone cracks.

“So, when my jaw does fracture, I’d have to take a piece of (bone from) my leg area and rebuild it,” he said.

For right now, Wilson is thankful to be alive and around to watch his children, ages 9 to 16, grow up.

He knows that one day his name will be added to one of the memorial walls at the 9/11 Responders Remembered Park.

“Yeah, I guess I can be on that wall someday, but I am not going to dwell on it,” Wilson said. “If you dwell on it, the terrorists win.”

Ken George gets angry when he hears people say the 9/11 terror attacks happened 16 years ago, get over it.

“How can I get over it when I have to take 32 different medications a day,” said George, of North Babylon.

The medications George takes daily for myriad ailments include those for his heart, lungs, cough, and PTSD.

His bones, he said, are deteriorating, causing him pain.

“To live with pain, like I do, 24/7, I think that’s enough suffering,” said George, now 53, who worked for the New York City Department of Transportation.

On the first night of the terror attacks, George was sent to Ground Zero to sort and remove debris, including human remains.

George remembered that when he and other workers at the site removed a large steel beam, a plume of green smoke floated out of the ground.

Soon after, George developed a cough, which he said lasted a month. At the time, his doctor said he had bronchitis and asthma.

“But the cough wouldn’t go away. I went back to the doctor but none of the cough meds worked,” said George, adding that the doctor finally found one that controlled his cough. “And, I’ve been on that cough medicine now for 16 years.”

One illness led to another and soon they put a strain on his heart, which he said led to a heart attack in 2005.

When George was working, he said he was required to submit to a physical examination every two years. His health and his weight, George said, were “perfect.”

Now he depends on an oxygen tank and walks with a cane.

Activities that once brought him joy are now off limits, such as swimming in a pool or attending a baseball game.

“I can’t go out to a ballgame because when there are too many people around, I have a panic attack,” he said.

If his daughter wears too much perfume, it triggers an attack.

At night, when the crickets chirp, George closes his bedroom windows. The sound of the insects reminds George of what he heard during those days at Ground Zero: the ringing of personal alert safety systems worn by firefighters to let others know they are in distress.

On Sept. 11, 2001, George heard many of these alerts coming from the rubble pile. It meant the firefighters wearing the devices hadn’t moved.

At times, he can’t escape the echo of that sound in his head.

“It’s like a circus, a carnival, it keeps in your head and you can’t control it. It won’t shut off,” George said. “It keeps going and going and going.”

The James Zadroga 9/11 Health & Compensation Act of 2010 established the World Trade Center Health Program, which pays for health care, medical monitoring and treatment to the people directly affected by the terrorist attacks on Sept. 11, 2001.

It was named for NYPD Officer James L. Zadroga, 34, who in 2006 died of respiratory disease that supporters of the law attributed to his work at Ground Zero.

The Zadroga Act was approved by Congress in December 2010 and signed into law by President Barack Obama in January 2011. Reauthorized by Congress in 2015, the law extended compensation provisions to 2020 and its health care measures to 2090.

Nearly 80,000 people, most of them first responders, are covered by act.

As of June 30, 1,387 have died, although it is not known whether all of the deaths were attributed to 9/11 illnesses.

Nearly 7,000 people enrolled in the program have been diagnosed with cancers. The majority of them — nearly 6,000 — are first responders.

In addition to cancer, other certified illnesses include asthma, sleep apnea and post-traumatic stress disorder. Advocates are working to add other diseases, including autoimmune disorders, to the list.

Sources: The World Trade Center Health Program and the Centers for Disease Control and Prevention