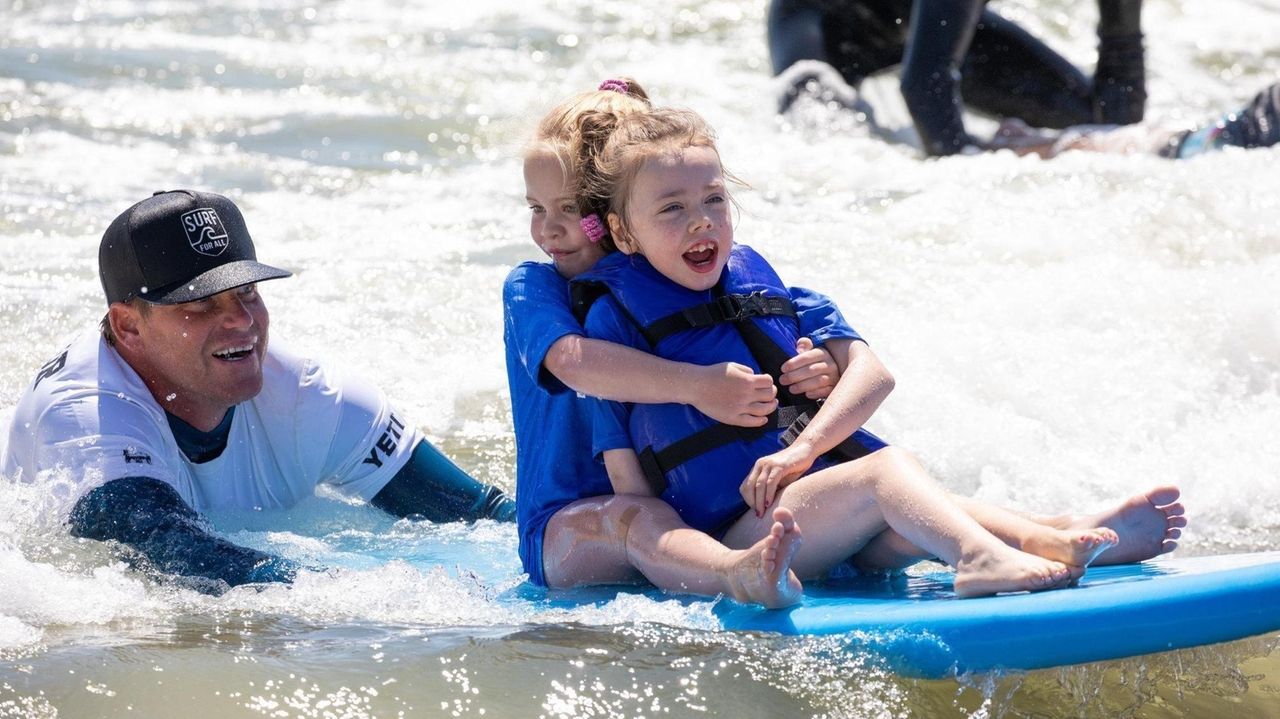 About a dozen youngsters with special needs learned to surf Monday with the Adaptive Sports Academy, a Hospital for Special Surgery’s program based at the Lerner Children’s Pavilion, and Surf For All, a Long Beach-based non-profit.  Credit: Newsday / Yeong-Ung Yang

When Zach Delgado was hit by a school bus in his Brooklyn neighborhood two years ago, doctors told his family they would have to amputate his right foot. Zach’s mother Allexa Delgado, a trained surgical technician, refused to believe it and eventually doctors were able to save the foot.

On Monday, the 11-year-old planted his two feet atop a bright blue surfboard, stretched his arms out and rode the waves of the Atlantic Ocean back to the shores of Long Beach.

“I got some tides,” he said. It was his first time surfing.

Zach was one of about a dozen kids who learned to surf Monday with the Adaptive Sports Academy, a program of the Lerner Children’s Pavilion at the Hospital for Special Surgery, and Surf For All, a Long Beach-based nonprofit.

The lesson started with instructions on land — how to ride the board and how to stand on the water — from Surf For All co-founder Cliff Skudin. Skudin began offering lessons to individuals of varying abilities in 2002 through his company Skudin Surf and has been teaching Hospital for Special Surgery patients how to surf for four years.

“The kids were psyched,” Skudin said. “It really lifts their spirits.”

Foam paddle boards equipped with handles, life jackets and adapted techniques, like tandem or sitting riding, were used to create a surfing experience for each child.

“The water for them is a playground, they have limitless abilities in the water,” Hospital for Special Surgery physical therapist Bridget Assip said. “They can do something that on the land might be more difficult, but in the water they can do things that they weren’t able to before.”

The kids rode for about an hour, some on their own and some with siblings. A jumbo-sized board was even loaded up with four youngsters for a group ride.

Parents and hospital staff members watched with smiles as kids soared over the waves.

“It’s great for the kids because it builds their self esteem and it gives them some normalcy,” Allexa Delgado said.

After 11 surgeries, 10 months off of his right leg, and four months spent in the hospital and rehab, surfing is just one of the ways Hospital for Special Surgery, and the academy in particular, have helped Zach get back on his feet .

He is set to go horseback riding with the group at the end of the month, and he has played tennis and basketball with them. Zach loved basketball before his injury, but wasn’t able to participate in the same way after, his mother said.

But, through the academy, he discovered wheelchair basketball and now plays on a New York City-based team called the Rolling Fury.

Zach said he likes basketball because it shows who he is and he can use his  math skills to calculate angles for his shots.

“After he started, he just lit up,” Allexa Delgado said. “That’s what I needed, I needed that glow back, and coming to these events has given him this impeccable glow. I just want him to keep smiling and being happy.”