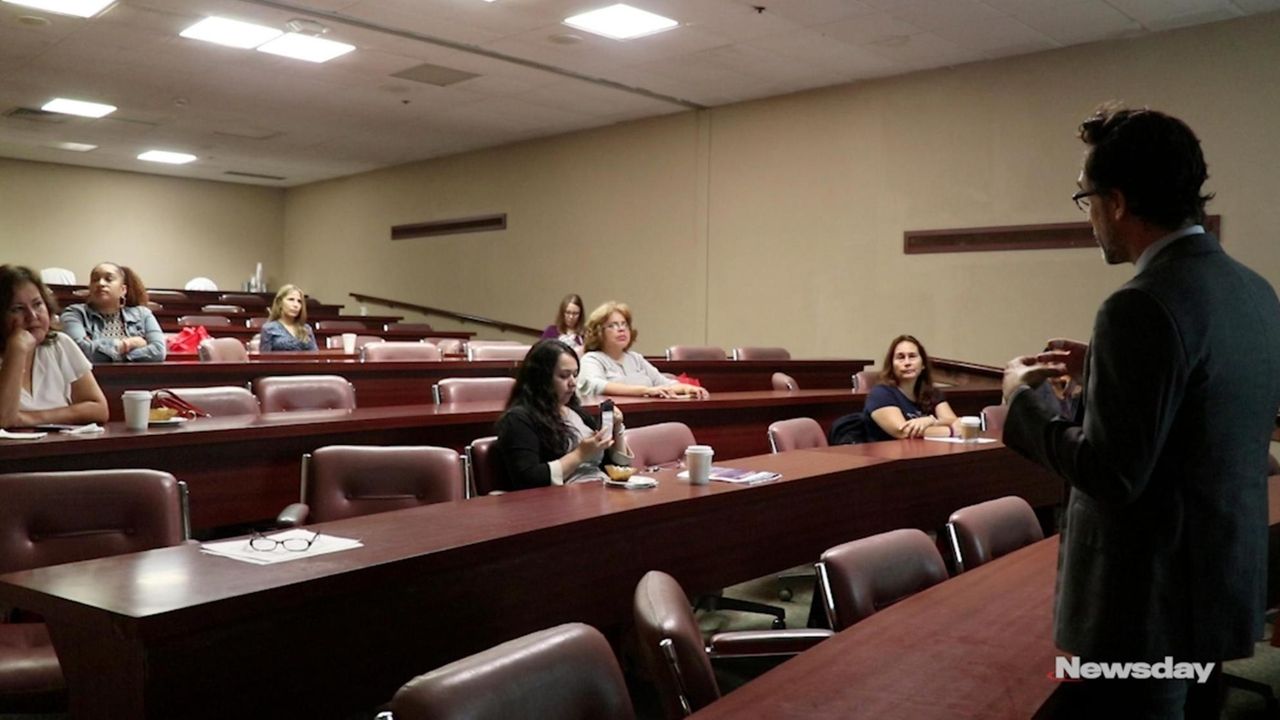 On Wednesday, the Long Island Chapter of the Alzheimer’s Association hosted its first Hispanic symposium in Hauppauge to discuss the impact and prevalence of the disease in the Latino community, including challenges surrounding diagnosis, treatment and caregiving. Credit: Jessica Rotkiewicz

Calls for greater participation of minority groups in clinical studies and increased preventive care were among the topics discussed Wednesday at Long Island's first Hispanic symposium on Alzheimer's disease.

Although these populations are at an increased risk of the disease, they make up 7 percent or less of all clinical trial participants, according to research presented at the symposium. The Alzheimer’s Association Long Island Chapter hosted the Hispanic symposium at the Radisson Hotel in Hauppauge.

Most studies are performed on non-ethnic whites, but their risk factors are not the same as those of people of color, said Osorio, a neuroscientist.

Most Hispanics have mortality rates that are comparable to non-ethnic whites, though they have lower average income and education, more cases of diabetes and in some cases, more hypertension — all of which are believed to be contributors to Alzheimer's, Osorio said. This paradox could be understood with more research, he said.

“In general, we have to do outreach,” Osorio said. “Hispanics and African-Americans are the groups we know less about, but they are also the groups that are reluctant to volunteer for research.”

Elizabeth Robles, community education manager of the Alzheimer’s Association Long Island Chapter, said the organization's goal was to educate the community on the latest information and statistics and share available resources with the growing Hispanic population on the Island.

“We want them to know they’re not alone," she said at the symposium, which was presented in English and Spanish.

The organization's local chapter offers free Spanish-language resources, programs and services to aid families who are navigating Alzheimer's and other dementias. The association has a nationwide 24/7 helpline that is available in more than 200 languages and is staffed by specialists who offer real-time support, care consultation and referrals. It also offers an online community forum, a support group of sorts, for those affected by the disease.

Alzheimer’s is a progressive disease where dementia symptoms gradually worsen over a number of years. Treatment can alleviate symptoms, but it does not stop the disease or change its course. There is no cure.

One does not have to be diagnosed with Alzheimer’s to participate in a clinical trial, Osorio noted. It is more common for Hispanics to be diagnosed in the later stages of the disease, when individuals are more cognitively and physically impaired and need more medical care, he said.

During the symposium, Marielis Rivera, 41, of Greenlawn, offered a caregiver’s account of the toll Alzheimer's takes on patients' loved ones. Her stepfather, Manuel Colon Rivera, died of the disease at age 80.

Rivera urged the attendees, which consisted of medical and other professionals who work with seniors, to present the diagnosis with compassion.

“Let’s not lose the fact there is a human in front of you, no matter where they come from,” Rivera said.

These are the 14 most-Googled health questions in NYThese are the most-Googled questions in the New York area. Stop telling these 7 lies to your doctor"My injury isn't sex related." LI's top rated hospitalsYou can search this collection of U.S. government data to find out how Long Island hospitals, and a few in New York City, performed in various categories. Who are Long Island's top doctors?Search Newsday's database to find a top-ranked doctor near you and get tips on choosing the right health care provider.