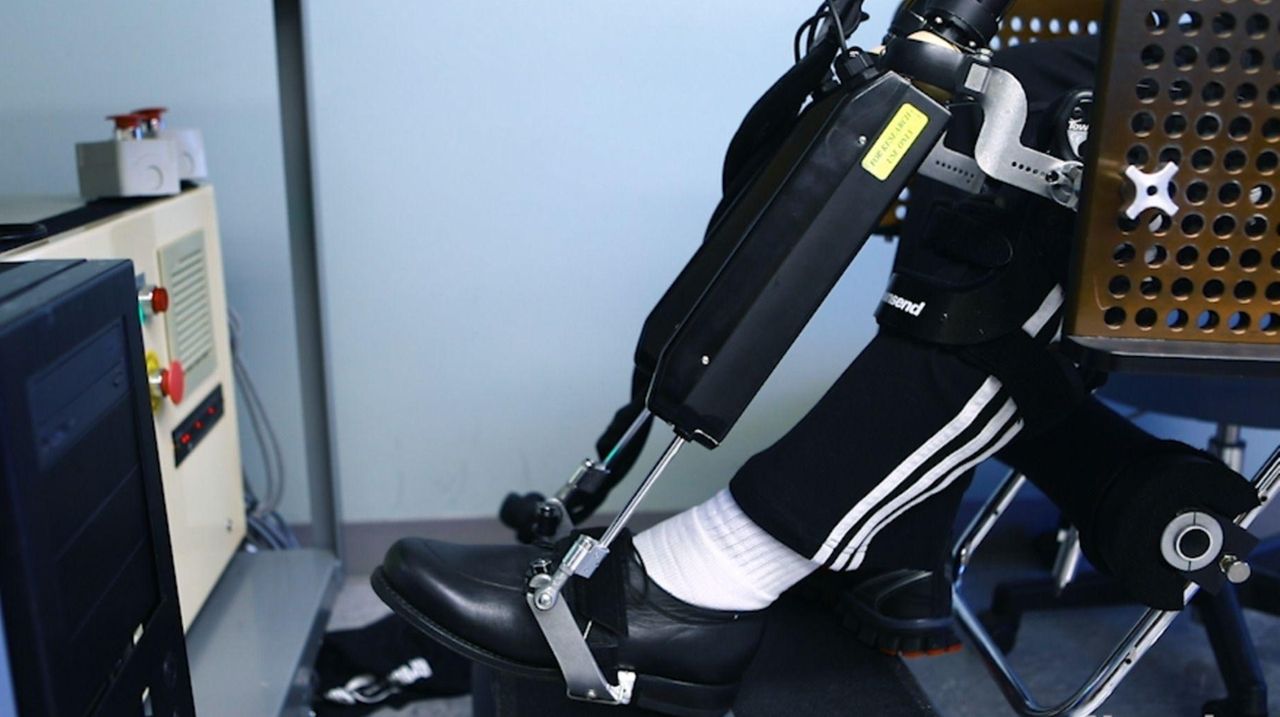 Keith Moran of Garden City, who suffered a stroke in 2013 that robbed him of the ability to walk, talked to Newsday on Aug. 30, 2017, about a robotic device known as the ankle bot that is helping him in his recovery. The device that can help improve walking speed and balance after a stroke is part of a series of bioelectronic studies underway at the Feinstein Institute of Medical Research in Manhasset. Credit: Newsday / Raychel Brightman

Keith Moran of Garden City is a pioneering patient of breakthrough medical research, back on his feet and regaining his walking speed with help of an “ankle bot” — the first robotic device to help people coordinate ankle and foot movement after a stroke.

The high-tech aid, the result of more than two decades’ work, is under study at The Feinstein Institute for Medical Research in Manhasset and among the facility’s diverse investigations into avenues of treatment that do not use drugs.

Dr. Bruce Volpe, the ankle bot’s co-inventor and a professor in the institute’s Center for Biomedical Science, collaborated over the years with scientists at Massachusetts Institute of Technology to develop a device that influences human movement.

Their research required both knowledge of robotics and a better understanding of the human brain, he said, noting that science has had an imperfect record of grasping how the brain attempts to restore function after an event as devastating as a stroke.

Moran, 50, who had a hemorrhagic stroke in the summer of 2013 that weakened the extremities on his left side, said the ankle bot worked so well that he no longer needs a cane.

“I have worked hard to recover,” said Moran, who was a real estate broker before the stroke. “The fact that I am walking is amazing.”

Unlike other devices being studied at The Feinstein Institute, which include pill-sized electronic implants, the ankle bot is an external apparatus and part of the growing global inventory of intelligent robotic machines.

A patient, while seated, wears the device on the affected leg and it moves the paralyzed limb through a series of subtle exercises.

Patients who are wearing the ankle bot direct their attention to a computer screen, which cues them to make the movements. The device is endowed with artificial intelligence that prompts it to get out of the way when the patient powers the movement independently.

Currently, the ankle bot tests 1,000 different movements in an hour, said Johanna Chang, clinical research coordinator at the institute. After 18 weekly sessions, the device can help people not only walk more fluidly, but gain speed, balance and a more normalized gait, she said.

It holds promise as a pivotal tool for rehabilitation.

Stroke is a critical public health problem in the United States, affecting about 795,000 people annually and claiming the lives of 140,000, according to the Centers for Disease Control and Prevention.

People who arrive at an emergency room within three hours of their first symptoms — usually numbness on one side of the body and slurred speech — often have less disability three months after a stroke than those whose immediate care was delayed, CDC statistics show.

With either type, the damage can be extensive, affecting patients’ ability to walk, talk and feed themselves. The American Stroke Association estimates that 80 percent of strokes in the United States are ischemic.

“Rehab hospitals are devoted to getting people to move from bed to toilet and to keep the patient out of a nursing home,” said Volpe, noting that he had believed there must be a better way — a belief that motivated his research and the development of the ankle bot.

Many patients can ambulate after a stroke, but with difficulty. Some rely on a cane, as Moran initially did.

This year, Volpe and his team at The Feinstein Institute embarked on a clinical study of the ankle bot with 29 patients, including Moran, who had a common post-stroke affliction that is marked by dragging of one foot while walking. On a patient’s side weakened by the stroke, the ankle and foot lose coordinated motion.

Neuromuscular improvement was so significant in the small trial that the Feinstein team is looking toward more research with the bot and ultimately adding electrical stimuli to gait training.

Moran sees the scientific developments as a godsend as he tries to bring his body’s performance as close to normal as possible. He still has poor function in his left arm and hand and is continuing rehabilitative therapy to regain full use.

After the stroke four years ago, he said, doctors initially told him that he would be in a wheelchair, possibly for life.

“I found that prognosis very negative. I am one of those guys who would not accept those kinds of circumstances,” Moran said. “I wanted to function as best as I could.”

Earlier this year, when he learned of The Feinstein Institute’s research, he sought out Volpe and his team.

Volpe and Chang were looking for patients, like Moran, who had so-called “drop foot.”

Moran said his left foot “didn’t lift up” when he tried to walk.

“I can walk without a cane now and I couldn’t do that before,” he said. “I am really happy with my progress.”