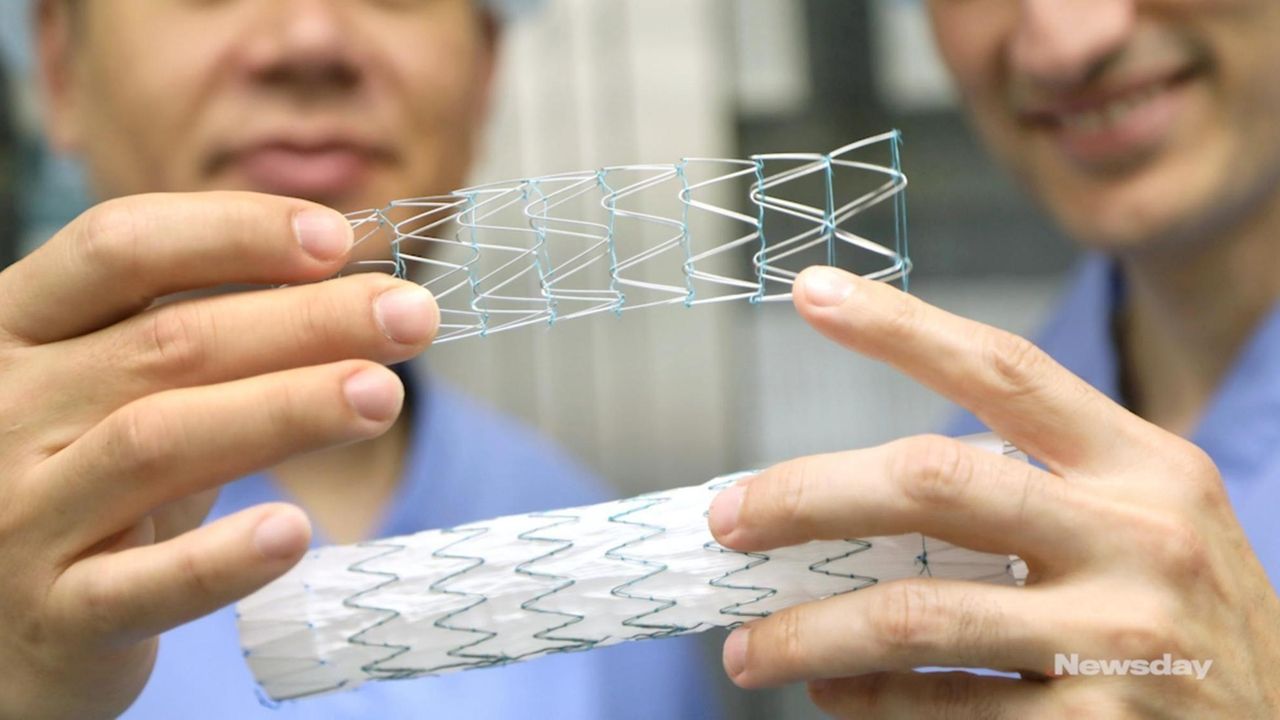 On Wednesday, the surgeons who provided a Patchogue man with a new kind of stent following a tear in his aorta, talked about the procedure they did earlier this year, which doctors are calling a first for any Long Island hospital. Credit: Newsday / John Paraskevas

A new type of stent inserted in a Patchogue man’s aorta, used for the first time on Long Island at Stony Brook University Hospital, lessens the risk of complications or death from damage to that key artery, doctors and hospital officials said.

The stent was used ito repair the aorta of John Tanzi, 61, who suddenly felt weak and dizzy on a Sunday afternoon in January and then lost control of the movement of his leg. He thought he was having a heart attack.

Doctors determined he suffered a tear in his aorta, which is the largest artery and the one that carries oxygenated blood to the rest of the body. The tear was diverting some blood from the channel where it should flow to an area between layers of the wall of the aorta — creating a “false channel” where it shouldn’t flow, said Dr. Shang Loh, a vascular surgeon at Stony Brook.

“They saved my life,” Tanzi said.

If left untreated, the tear in that section of the aorta could compromise the heart's function and likely be fatal, Loh said.

The tear in Tanzi’s aorta was caused by high blood pressure and possibly was in part genetic, Tannous said. In people with high blood pressure, the blood is pushing more forcefully against the walls of blood vessels, making tears more likely.

The surgery solved the immediate, most urgent problem. That section of the aorta was replaced with a fabric tube. In some patients, further surgery isn’t necessary. But in Tanzi it was, Tannous said.

Blood continued to flow into the “false channel,” which is not as strong as the main channel and “is not meant to carry that type of pressure,” Loh said.

On April 2, surgeons performed an operation to insert two stents designed to direct blood into the correct channel and help the aorta heal itself.

“We’re trying to get the body to figure out this is the correct channel,” Loh said.

The stent for the upper part of the aorta, made of stainless steel and white fabric, has been used for years.

But that stent can’t be used in the lower part of the aorta, because the fabric would block four vessels that carry blood from the aorta to vital organs such as the intestines, kidneys, liver and spleen. The new type of flexible stainless-steel stent does not have fabric, allowing the blood to flow into the vessels.

The U.S. Food and Drug Administration approved the new stent — part of the “Zenith Dissection Endovascular System” manufactured by Indiana-based Cook Medical — on Dec. 31, 2018. Loh said Stony Brook was one of the first 10 hospitals in the country to use it.

The stent “may prevent the aorta from bursting or blocking the blood supply to other areas of the body,” an FDA statement on the device says.

Patients can live with blood traveling through the false channel, and even with relatively small aneurysms, which is a ballooning of the wall of an artery, Loh said. But a large aneurysm bursting can be fatal, he said.

Until the introduction of the new stent, doctors used blood-pressure medication to prevent the growth of that channel. Often, though, medication doesn’t work well enough, and surgeons have to perform a major surgery to replace the entire aorta. That type of operation is risky and can lead to death or severe complications, including paralysis or stroke, Loh said.

Tanzi said he is grateful for the new procedure. His right leg is still weak, a result, Loh said, of nerve damage. It’s unclear whether he will regain normal movement of his leg, but physical therapy will help, he said.

The hope is to never have to perform another surgery on Tanzi’s aorta, Loh said. There’s no guarantee of that, though, and doctors will have to monitor Tanzi for the rest of his life.