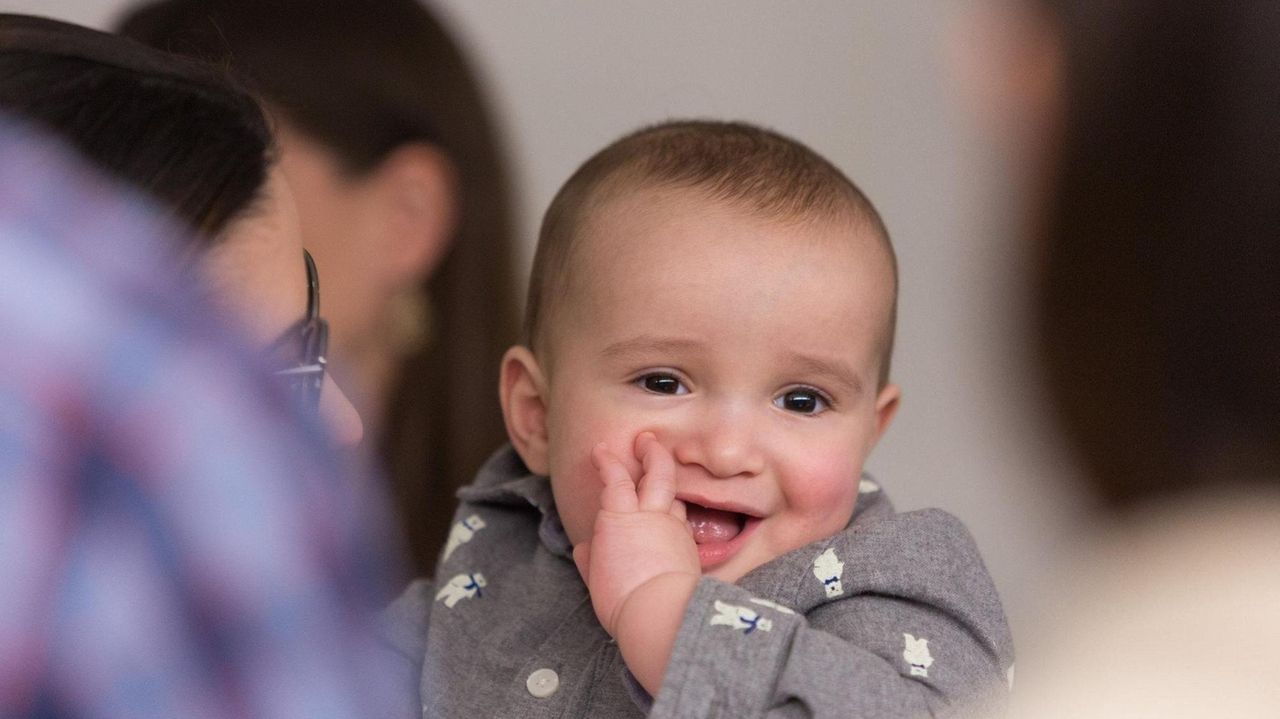 Matteo DiMartino was born with an abnormally large mass across his chest and left arm encompassing up to 50 percent of his body and weighing more than 3 pounds at birth. On Monday, Christina and Franco DiMartino talked about their son's condition, cystic hygroma, and his recovery. Credit: Barry Sloan

Matteo DiMartino cooed gleefully at the roomful of unfamiliar faces Monday morning — his jovial disposition belying the trauma that has dominated his first nine months of life.

Matteo was born with cystic hygroma, an abnormally large mass across his chest and left arm that weighed more than three pounds at birth and at one point encompassed half of his body.

But three months after a complicated seven-hour surgery to remove the cyst, doctors say Matteo is meeting or exceeding all of his developmental goals.

The DiMartino family’s journey began Nov. 14, 2018, about 13 weeks into the pregnancy, during a routine scan to check the fetus for medical issues.

The news was grim: Matteo had an extremely rare type of lymphatic malformation — nonmalignant cysts consisting of a buildup of fluid that formed in the womb.

The statistics were daunting. Three of every four cases were linked to a chromosomal disorder, and less than 10 percent of expectant mothers successfully brought a child with lymphatic malformation to birth.

DiMartino, a middle school teacher in Corona, Queens, was determined to defy the odds.

For six months, she spent her nights perusing the internet and online medical journals, researching the genetic malformation.

DiMartino’s husband, Franco, a Long Island Rail Road electrician, encouraged her to put down her phone and get some sleep. But Christina DiMartino would not rest, determined to learn everything she could about cystic hygroma, from terminology to treatment options.

“The DiMartino family exemplifies the example of determination, heart and never giving up,” said Dr. Martin Chavez, chief of maternal fetal medicine at NYU Winthrop-University Hospital, who treated DiMartino early in her pregnancy.

But Christina DiMartino concedes she was worried that she would lose the baby at any moment.

“Every day that went by, we’d wonder if today was the day,” she said. “It was definitely stressful and became almost crippling during my pregnancy.”

Matteo was born April 17, after just over 35 weeks in utero, through a caesarean delivery.

His condition, while not chromosomal, was worse than expected. The cyst was the size of Matteo’s chest and had caused a large open wound that was leaking fluid.

The malformation caused Matteo’s left arm to hang at a permanent 90-degree angle, restricted neck and head movement and prevented him from rolling over, sitting up, fitting into a car seat or into most clothing. Matteo was also prone to severe staph infections that, if not immediately treated, could become fatal.

An initial team of doctors  was less than confident about surgical options, she said. So DiMartino met with multiple doctors and surgeons, seeking out experts in craniofacial surgery, hematology, radiology and vascular anomalies. She eventually assembled a custom clinical team of specialists from five hospitals or surgical facilities.

With DiMartino’s hand-picked team in place, Matteo underwent surgery at Cohen’s Children’s Medical Center in New Hyde Park in late October to debulk and reconstruct the area with surrounding tissue and to excise the chronic draining wound.

Post surgical genetic testing determined Matteo has a rare mutation of a gene associated with many cancers.

Dr. Milton Waner, a pediatric plastic surgeon who helped perform the surgery, said Matteo is healthy and should not expect a recurrence of the malformation.

“This will not hold him back,” said Waner, director of the Vascular Birthmark Institute at the Lenox Hill Hospital, adding that there are only two known cases of Matteo’s condition. “It will not limit him.”

Matteo’s recovery, however, is not complete.

Small bits of the cyst that remain on Matteo’s arm and back will need to be surgically removed, Waner said. And the DiMartinos are hoping to soon take Matteo off a tumor-reducing medication that suppresses his immune system and has prevented him from socializing with other children.

“I went from being scared to [having] that beautiful baby boy who keeps us up every night,” said Franco DiMartino. “And I wouldn’t change it for the world.”