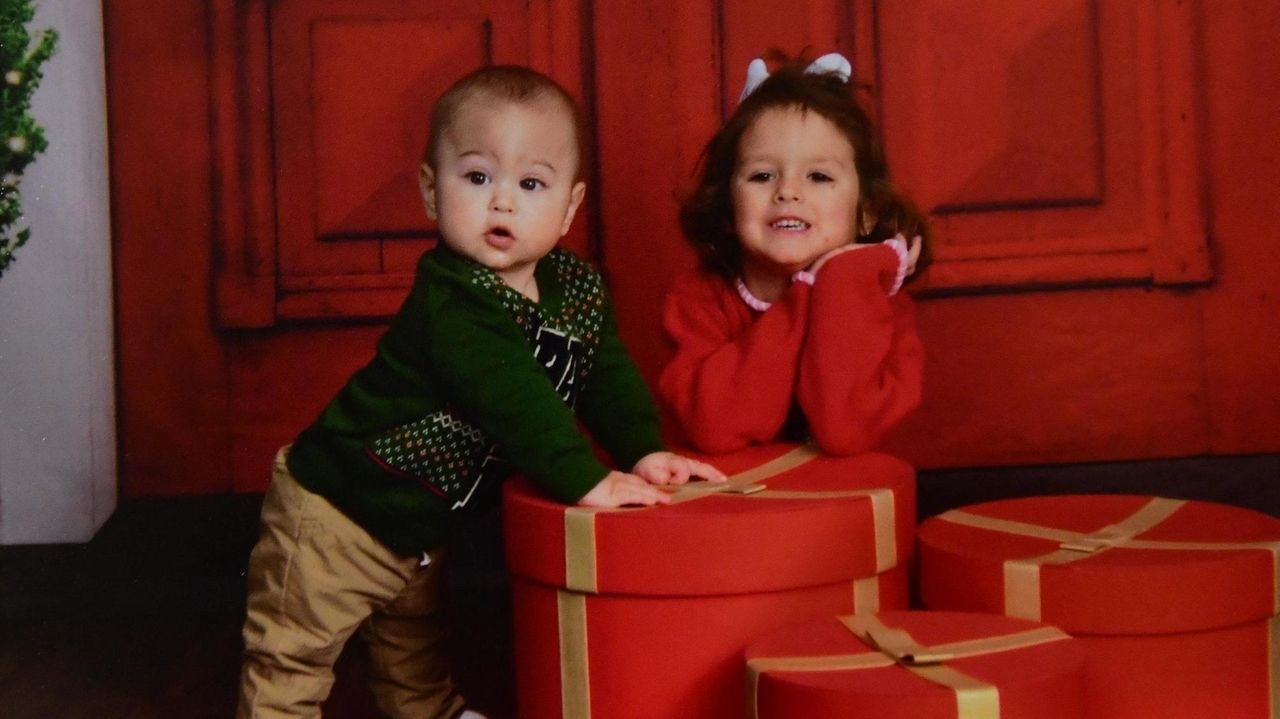 Mark and Nicole Bono found out that their unborn son's metopic bone was fused when Nicole was 36 weeks pregnant. On Tuesday, Dec. 20, 2016, the family spoke about the 3-D surgery that baby Vincent underwent at Stony Brook University Hospital. Credit: Newsday / Thomas A. Ferrara

The sonogram performed during her 36th week of pregnancy in early summer produced jarring news for Nicole Bono — her developing son’s head appeared to have an abnormal shape.

“They noticed that his head wasn’t round and when they looked from a side profile they noticed a ridge,” said Bono of East Patchogue, referring to a malformation that gave the baby’s head a triangular appearance. She said she and her husband, Mark, were told not to worry. The problem might resolve on its own after birth, doctors said.

It didn’t — necessitating a search for surgeons who not only could change the shape of the child’s head, but who could do so safely, precisely and without a need for additional operations in the future.

The Bonos found a team at Stony Brook Children’s Hospital that was able to use a 3-D printer to produce a replica of baby Vincent’s skull, which, in turn, allowed the medical team to fully rehearse the surgery long before they stepped into the operating room.

On Nov. 28, 6-month-old Vincent was wheeled into surgery for a three-hour operation to correct what doctors had diagnosed as metopic synostosis, a cranial developmental disorder that affects about one in every 15,000 babies.

“The kind of synostosis he had is one of the rarer forms,” said Dr. Michael Egnor, director of pediatric neurosurgery at Stony Brook Children’s Hospital, one of two surgeons who performed the operation.

Egnor said surgical correction for children born with the condition is important because without it, the brain could fail to develop optimally. Risks associated with leaving the condition uncorrected include developmental delays, cognitive impairment, eye movement disorders and seizures.

But Egnor underscored that operating on a baby is not a simple task because the potential for significant blood loss during surgery can prove fatal.

That is why choreographing every step in advance was vital, said Dr. Elliot Duboys, associate professor of surgery at Stony Brook School of Medicine and baby Vincent’s other surgeon.

Duboys said an infant’s skull has several plates, or sections of bone that are separated by fibrous tissue called “sutures.” As the child ages, the sutures close and the skull becomes fully formed as a solid piece of bone.

Baby Vincent’s metopic synostosis occurred when the metopic suture — which runs from the baby’s “soft spot” at the top of the head, down the forehead to the top of the nose — closed too early, Duboys said.

Through a collaboration with Medical Modeling in Colorado, known now as 3D Systems, Egnor and Duboys were able to virtually plan the entire surgery in advance.

Duboys said images from a CT scan of baby Vincent’s head were sent to the company, which then manufactured a model skull using the CT information as a template. The company also created a model of what Vincent’s skull should look like after surgery.

Having a replica in hand allowed the Stony Brook doctors to know where to make incisions, which tools to use and how to perform the surgery with the utmost precision, they said.

As a result, baby Vincent spent far less time under anesthesia than he would have without the use of 3-D surgical technology, Duboys said — conventional surgery likely would have added hours to the operation.

Hospitals across Long Island and elsewhere in the region are using 3-D printer technology to rehearse and perform operations ranging from brain-tumor surgery to cosmetic corrections. Surgeons at North Shore University Hospital, a division of the Northwell Health System, recently used the technology to reconstruct a patient’s nose.

Nicole Bono said the holidays have been made all the more poignant with her 7-month-old’s successful surgery and rapid recovery. Big sister Kallee, 4, is pleased, too, she said.

Mark Bono highlighted his son’s lighthearted spirit — and hearty appetite. He’s buoyed by the surgery’s success, knowing that no future operations are needed and that his son’s head will grow normally.

“Vinny is such a happy baby, always laughing and smiling — definitely a happy, chubby little boy,” his dad said.

“He loves his pasta and meatballs. We have to fight with him to eat baby food. You put pasta in front of him, and he eats the whole thing. It’s amazing.”