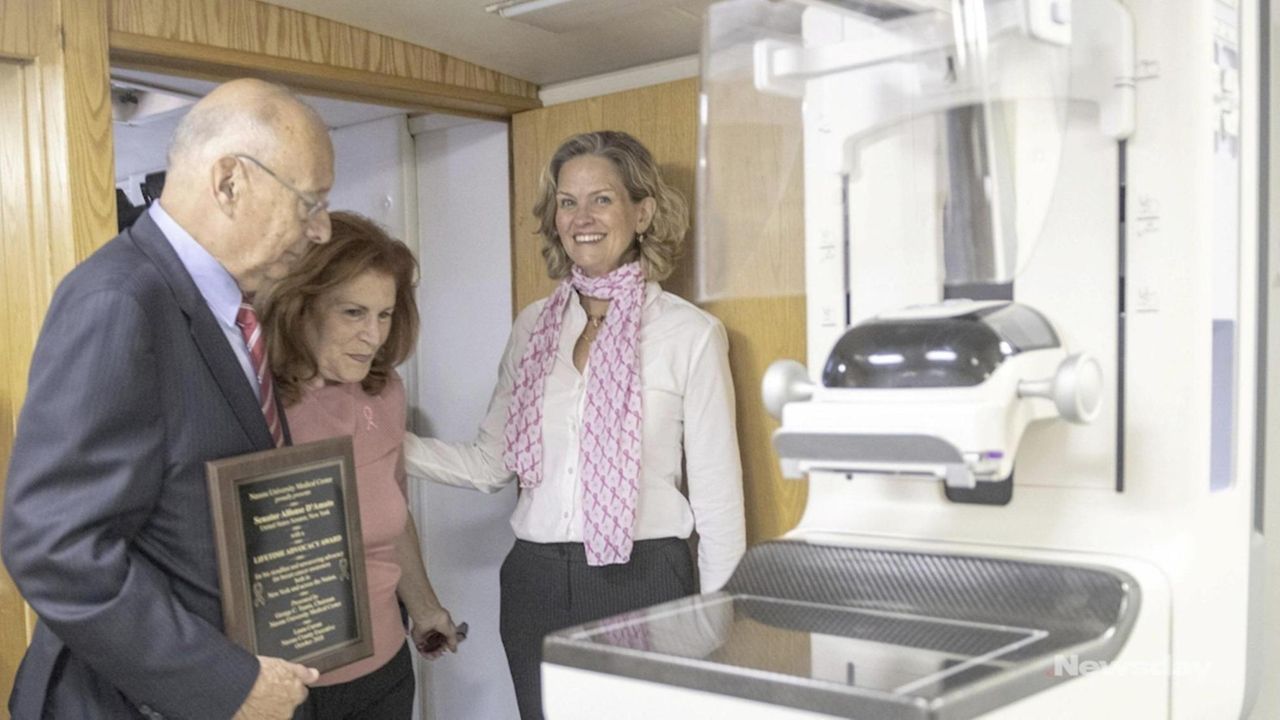 The Nassau University Medical Center announced Monday it was naming a 3-D Breast Cancer Detection Vehicle after breast cancer survivor and advocate Geri Barish. The vehicle will travel to hundreds of communities to provide screenings to women.  “We are living longer. Because of the awareness we are saving more lives,” Barish said at a ceremony at the center attended by Nassau County Executive Laura Curran, marking the start of Breast Cancer Awareness Month. Credit: News 12 Long Island

Some 25 years after they launched what turned into a major breast cancer awareness program on Long Island, two leading advocates said Monday the movement has made great strides, but more needs to be done.

Geri Barish and Lorraine Pace said the effort's greatest achievement has been alerting more women to get early detection tests, including mammograms, that can save their lives.

“We are living longer. Because of the awareness, we are saving more lives,” said Barish, who founded the advocacy group 1 in 9 The Long Island Breast Cancer Action Coalition, at a ceremony Monday at Nassau University Medical Center that marked the start of Breast Cancer Awareness Month.

Pace, founder of the Mapping Project, in which cancer cases were mapped out, house by house, in her West Islip community, said breast cancer on Long Island is “still there. Young women are getting this disease. We need to do more studies, better studies like we did in '92, ZIP code by ZIP code.”

Long Island was once considered to have the highest breast cancer rates in the state. Today, the numbers have dipped, but remain high and are a cause for concern, officials said.

Out of 62 counties in the state, Nassau ranks seventh in breast cancer incidence, while Suffolk ranks 17th, according to age-adjusted rates from the state Health department for 2011-2015, the latest years available.

The two counties combined account for 16 percent of the state’s breast cancer totals.

Nationally, one in eight women will be diagnosed with breast cancer in her lifetime, according to the National Cancer Institute. There are more than 3 million breast cancer survivors in the U.S.

On Monday, NUMC announced it was naming a 3-D Breast Cancer Detection Vehicle after Barish. The bus-size vehicle, which hospital officials said contains state-of-the-art detection equipment, cost about $350,000 and will travel to hundreds of communities to provide screenings.

What are the most common types of cancer on LI?

George Tsunis, chairman of NUMC's board of directors, said breast cancer is a major concern. “There have been fewer things that have had greater consequences to the Long Island community … than breast cancer,” he said. He noted that the hospital serves many low-income residents and “sometimes it is the last place people can get care.”

Barish said she was surprised and delighted the vehicle was named after her. “I’m so excited,” she told a crowd of public officials, medical personnel and cancer survivors. “I’ve never had a van named after me before.”

How the COVID-19 pandemic changed Long Island's towns
2:18
Snowstorm closures used to scare him. No more.
NY now one of 18 states with half of adults fully vaccinated against COVID-19
1:25
Doctors disagree on whether Cuomo's decision to lift restrictions is wise
Some aren't ready to give up masks despite new CDC guidance
COVID grants for restaurants nearly gone: SBA
Didn’t find what you were looking for?