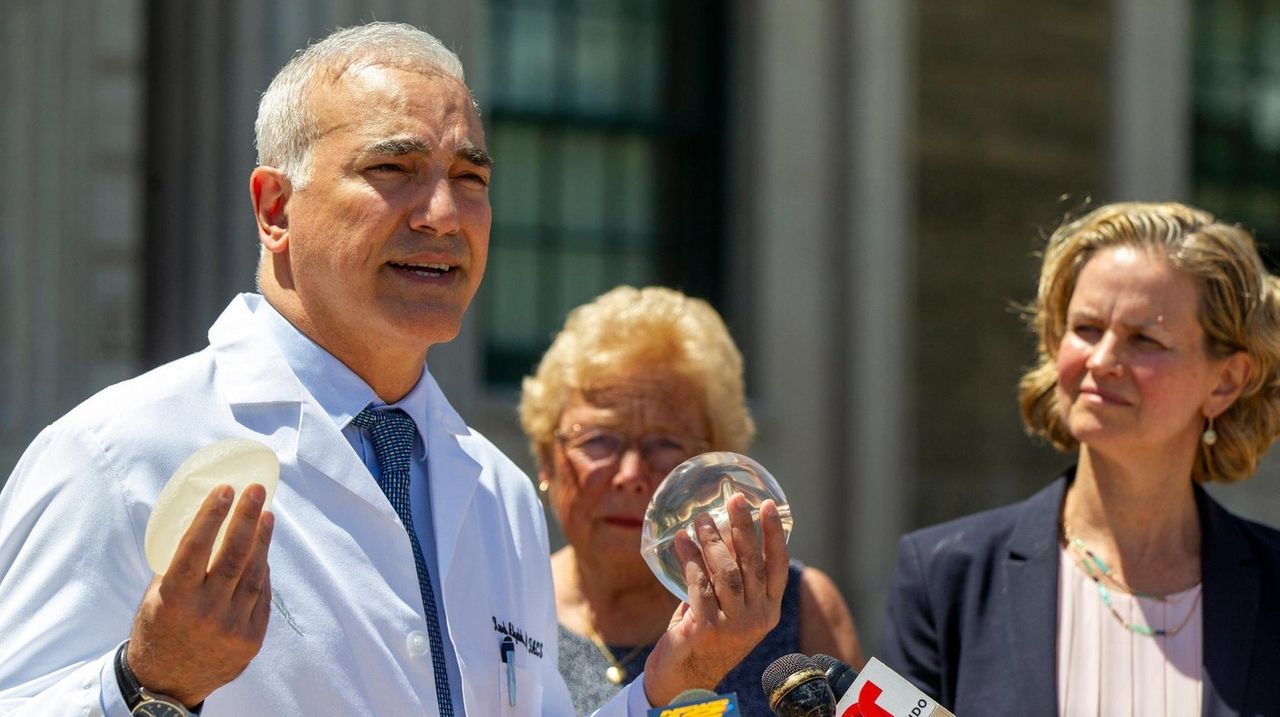 Local lawmakers and cancer specialists on Tuesday warned Long Islanders about the potential dangers of textured breast implants, which have been linked to breast-implant-associated anaplastic large cell lymphoma, a rare cancer of the immune system.  Credit: Newsday / Shelby Knowles

Long Island lawmakers and cancer specialists are warning residents about the potential dangers of textured breast implants, which have been linked to a rare, but serious, cancer of the immune system.

Textured implants also have been banned across Europe, where they are more common than in the United States.

The U.S. Food and Drug Administration announced last month that it would monitor, but not prohibit, the sale of macro-textured implants, which have a rough sandpaper-like surface and large pores or ridges on the outside.

Dr. Kaveh Alizadeh, chief of plastic and reconstructive surgery at Westchester Medical Center, encouraged patients with textured implants to make an appointment with their doctor. He said at least one Long Islander had been diagnosed with BIA-ALCL although he declined to detail the case, citing privacy.

“We want to make sure that people are not acting out of fear and they are acting out of knowledge and understanding of science,” said Alizadeh, who is part of a panel of plastic surgeons studying the effect of textured implants on cancer rates.

The FDA held a public meeting in March on the safety of textured implants and announced last month that not enough evidence was found to prohibit the sale of the device.

“At this time, the FDA does not believe that, on the basis of all available data and information, the device meets the banning standard set forth in the Federal Food, Drug, and Cosmetic Act,” the FDA said in a statement.

The agency said it would educate pathologists about lymphoma testing, potentially include labeling changes such as a black box warning, and help compile a registry of patients with textured implants to study cancer rates.

In 2018, textured breast implants represented less than 10 percent of all breast implants sold in the United States, according to the FDA. Incidence rates of cancer linked to the textured implants range from 1 in 3,000 to 1 in 30,000, federal data show.

In the United States, 457 women have been diagnosed with the rare lymphoma and 17 women worldwide have died from the disease, according to the FDA.

Geri Barish, president of the Long Island Breast Cancer Action Coalition, said women must be aggressive in speaking to their doctors about the risks of textured implants.

“As patients we have rights,” Barish said. “And we need to understand what we are getting.”

2:15 Johnson & Johnson vaccine has arrived on Long Island
What you need to know about COVID-19 vaccine development
2:29 LI's 1st COVID patient reflects 1 year later: 'I'm one of the lucky ones'
Standardized testing in the pandemic: What will it be like for kids and teachers?
1:31 Kings Park proposing return to full-time in-person learning
Port Authority: Airport travel down 73% from pre-pandemic times
Didn’t find what you were looking for?