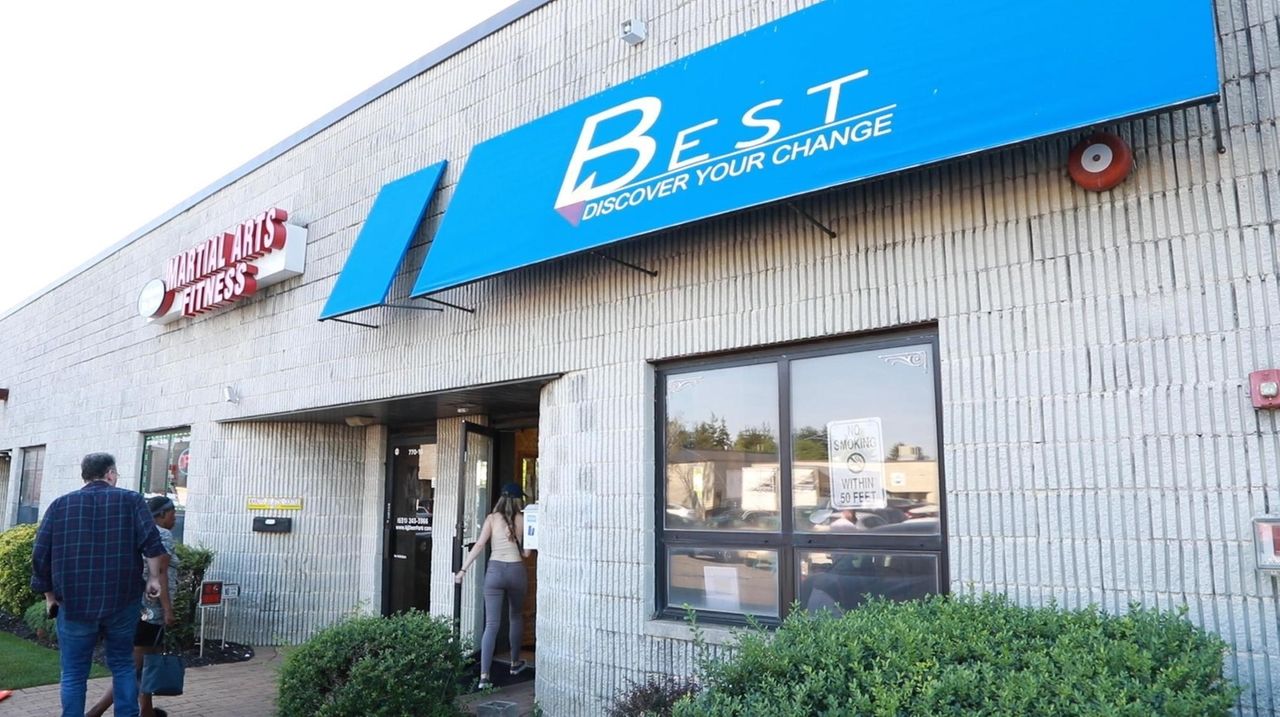 Doreen Crane of North Babylon is fighting her addiction to opioids at the Deer Park drug treatment clinc BEST in Deer Park. Crane is on Suboxone, which is a mixture of buprenorphine and naloxone. Buprenorphine is an opioid, but it produces either no high or a much weaker high. Credit: Newsday / Yeong-Ung Yang

Liz Barberis smoked pot in high school. By the time she was in her early 20s, she was doing heroin and OxyContin.

She used on and off for nearly 25 years. There were times when she didn't think she would ever beat her demons, let alone stay alive. But now she is staying clean with a drug — buprenorphine — that is helping save other Long Islanders, too.

Barberis came from a good family. Her dad was a cop, her mom a nurse. She thinks they didn't see how desperate she was to get high. Or maybe they just couldn't face the fact that their daughter was a junkie.

She moved from home and got a job. She showed up late more than she was on time. She fell behind on the bills. The phone was shut off, then the cable. The landlord threw her out.

"The kind of lifestyle you need to live to be a drug addict — it's a horror show," said Barberis, 48, of Selden. "I've stolen from stores. I've stolen from family. I've lied. I've lost people."

Then, five years ago — after a two-decade cycle of recovery and relapse — things started to get better. She went into counseling and started taking buprenorphine, which both dulled her withdrawal symptoms and kept her from wanting to get a fix.

And all she had to do was fill a prescription. No standing in line at a methadone clinic, where somebody might see her.

Buprenorphine, known on the street as bupe, is now the most prescribed drug to treat opioid addiction in the country, experts said.

There's a reason why: It works. And it's not just the addicts like Barberis who say so.

On Long Island, buprenorphine prescriptions grew nearly a fifth in the past five years, from 10,757 to 12,621, state health figures show. Across New York, buprenorphine use jumped by about half, from 49,316 to 72,434.

The reason for the bigger increase statewide is simple. Long Island was ahead of the curve.

"Long Island had more [treatment centers] in place early on, and the larger increase in the rest of the state is due to other areas catching up that didn't have as much to begin with," said Evan Frost, spokesman for the state's Office of Alcoholism and Substance Abuse Services.

Buprenorphine itself is an opioid so it can give a buzz or depress breathing, like any opioid. Its effects, though, are weaker than the effects of methadone, according to the U.S. Substance Abuse and Mental Health Services Administration.

"Buprenorphine is much more widely available in the U.S. than methadone," said Dr. John Rotrosen, a psychiatry professor in NYU Langone’s Department of Psychiatry. "It is safer … it is harder to overdose on it."

Barberis tried methadone 20 years ago. It wasn't right for her.

Every morning, she had go to a methadone clinic and she didn't like how she felt afterward.

"I would get drowsy," Barberis said. "It was only after work that I'd come down."

Other addicts have a vastly different experience with methadone, said Rotrosen, who specializes in addiction research. They do stop using, he said.

"There are many providers who have strong opinions about which treatment is better," noted Rotrosen. "The important question is not which is better overall or on average, but which is better for which patient."

In 2000, Barberis moved to Arizona, thinking she could start a new life.

"I changed locations, but the person who needed to drink and drug did not change," she said. "I got rid of the crowd on Long Island, and I found a crowd in Arizona."

After a year, she came back home — and started on a loop of treatments. Clean a few months, then back to the drugs.

Then she went into a women's home for recovering addicts. She started going to a 12-step meeting. She got clean and stayed clean for five years.

Then her back started acting up, again. And there was a hernia. The doctors prescribed painkillers.

But she learned a great lesson.

"No matter what somebody prescribes me, I'm in charge of what I'm going to take."

Nine years ago was the first time Barberis took buprenorphine. It worked — for a time.

She stayed clean about three years, but she couldn't get away from what she had running away from for a long, long time — her emotional troubles, depression and bipolar disorder.

She moved back home for a while. She went in and out of hospital detox and psychiatric units. She relapsed.

She tried "white-knuckling it," going cold turkey. No luck. She craved drugs.

And she knew she was a junkie, but she didn't want to accept that she was depressed and bipolar.

"I remember thinking, ‘I'm an addict, but don't call me a mental-patient person,’ ” she said.

SUBOXONE DOES THE JOB

It was only when Barberis walked into a Deer Park rehab center five years ago that her life started to come together.

At the BEST clinic, the doctors prescribed Suboxone, the brand name for a mix of buprenorphine and naloxone. Naloxone has gained a reputation of its own as the brand Narcan, which reverses an overdose.

And she went into therapy. She was going through a really rough patch. Both her fiance and her mother had died within weeks of one another.

Her counselor helped her deal with the sadness.

"She listened," Barberis said. "We developed strategies for my anxiety. I would go for a walk, or do deep-breathing exercises."

She still goes to therapy at BEST. She still takes Suboxone.

She has a good job, managing a house for women recovering from substance abuse — drugs and alcohol. And she's going to school to become a certified alcohol and substance abuse counselor.

Someday, her doctors might decide that she needs to come off the drug. That worries a part of her.

She doesn't want to mess with what is working: therapy and Suboxone.

Three medications are approved by the Food and Drug Administration to treat opioid addiction:

Buprenorphine: An opioid that eases withdrawal symptoms and tamps down the craving for other opioids. Generally taken once a day as a pill or in film form. Cost runs $7 to $10 for a tablet, $5 to $16 for a film.

Methadone: Also an opioid that takes the edge off withdrawal. By law, methadone can be dispensed only through a certified opioid treatment program and must be taken at the clinic. Generally taken once a day as a pill, liquid or wafer. Cost can be as little as a dollar a dose.

Naltrexone: Not an opioid. Binds to the opioid receptors in the brain and keeps users from getting high. Known under the brand name Vivitrol. Taken once a month as an injection. Cost can be as much as $1,600 a shot.

Hospital emergency rooms see a lot of addicts. They've overdosed or are in withdrawal. Or their bodies have just broken down because of all the drugs. And now ERs helping addicts get help not only in real time, but lon -term.

Patients are being screened for substance abuse. Doctors are offering buprenorphine and making referrals to drug treatment clinics.

"We are building a clinical model so we can identify people and intervene early," Kapoor said. "That's a game-changer."

This fall, Stony Brook University Hospital will rolling out a program through its emergency room called Medication for Addictions Treatment, or MAT, which includes buprenorphine.

South Nassau Communities Hospital has been dispensing buprenorphine in its emergency room since spring. Doctors bring in addicts-turned-counselors who connect patients with counseling.

"You cannot just do [buprenorphine] just once and hope for the best," said Dr. Joshua Kugler, Chairman of the Department of Emergency Medicine. "We will get them on the pathway to recovery."