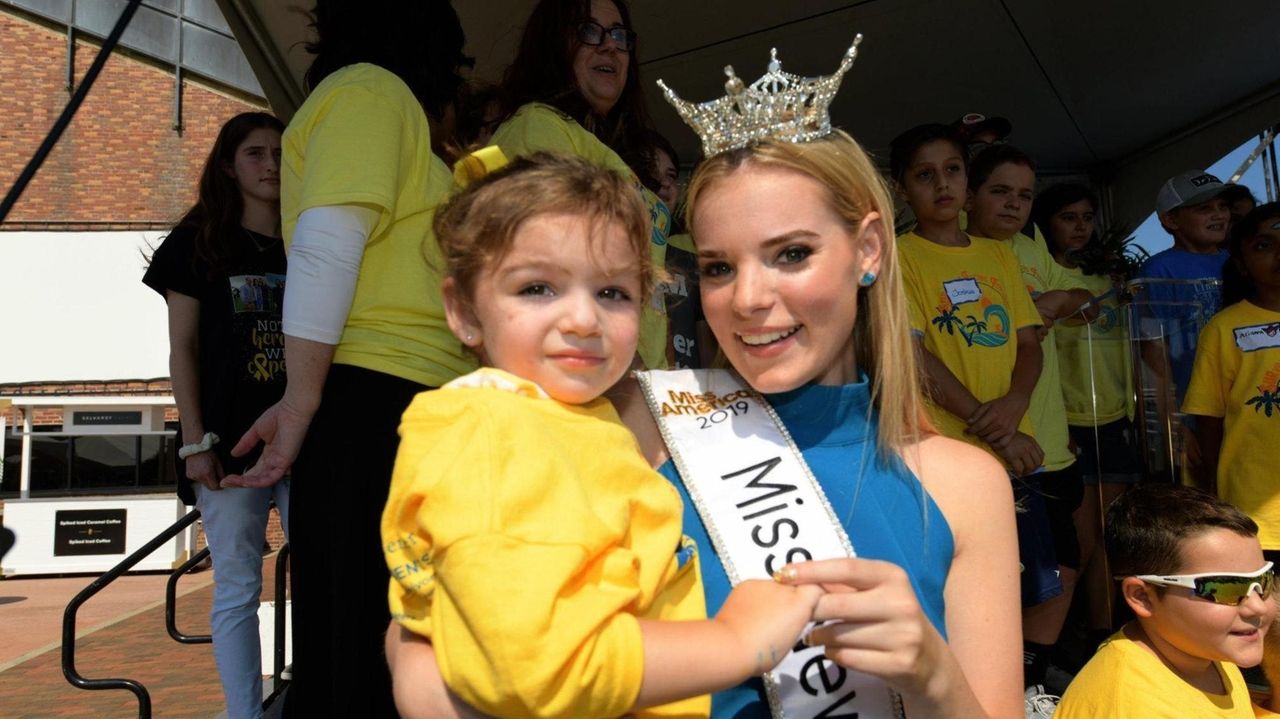 Cancer robbed so much from Olivia Macchio during the years she battled the disease: time at school, time with her friends, time with her family. But the 12-year-old from Garden City, diagnosed with an aggressive blood cancer called Burkitt lymphoma in 2015, said she stayed upbeat through months of chemotherapy and repeated hospital stays thanks to the support of her friends and family.

There was hair loss and a lot of fear. There was sadness and loneliness. There was medicine that made her feel awful, Olivia said Sunday at the seventh annual Les Nelkin Pediatric Cancer Survivors Day, hosted by the Cohen Children’s Medical Center. But there were friends and family members who stood with her through the rough times, she said. There were nurses who sang songs and showed her funny videos to cheer her up. There were even doctors who allowed her to hit them with a pie in the face during a St. Patrick’s Day carnival.

“I’m happy to report I’m healthy now,” Olivia told the 500 or so people, including 100 pediatric cancer survivors, who gathered at the Northwell Health at Jones Beach Theater under a gloriously blue sky for the event. “I have been in remission for almost five years. I’m back to school, back to all my sports and activities.”

Olivia was not the only star at the cancer survivors day — Wonder Woman, Spiderman, Miss Connecticut and Mr. Met were among the dignitaries who posed for photos and swapped high-fives with young cancer survivors. There were inflatable slides, games and crafts. The New York Marine Rescue Center brought turtle skulls and shells. Joe Genellaro and Kevin Darcy from the Long Island Aquarium brought a snake, exotic cockroaches and a couple of odd-looking insects called devil’s walking sticks for kids to pet, as well as a rare pancake tortoise named Flapjack.

Dr. Jonathan Fish, a pediatric hematologist/oncologist at Cohen Children’s Medial Center who heads a program called Survivors Facing Forward, said it was important to honor the struggles and accomplishments of young cancer patients and their families. He said the pediatric cancer survival rate is 80 percent, a figure that has dramatically increased in recent decades. Many, he said, will need lifetime medical attention, even if the cancers they survived do not return. Chemotherapy and radiation treatments, he said, can affect their health for life, and Fish said his goal is to help his patients not only survive, but thrive.

“It’s hard enough being a teen or a preteen without having to lose your hair or face your own mortality,” Fish said.

Annette Pavlakis of Smithtown, who was diagnosed with a rare kidney cancer known as Wilms tumor when she was 11 years old, said she struggled for a long time with anxiety stirred by fears her cancer would return. She said anti-anxiety medication has improved the quality of her life.

“I’m able to go out and live my life the way all cancer survivors should,” said Pavlakis, 20, a student at the New York Institute of Technology.

CORRECTION:   Annette Pavlakis' name was misspelled in an earlier version of this story.