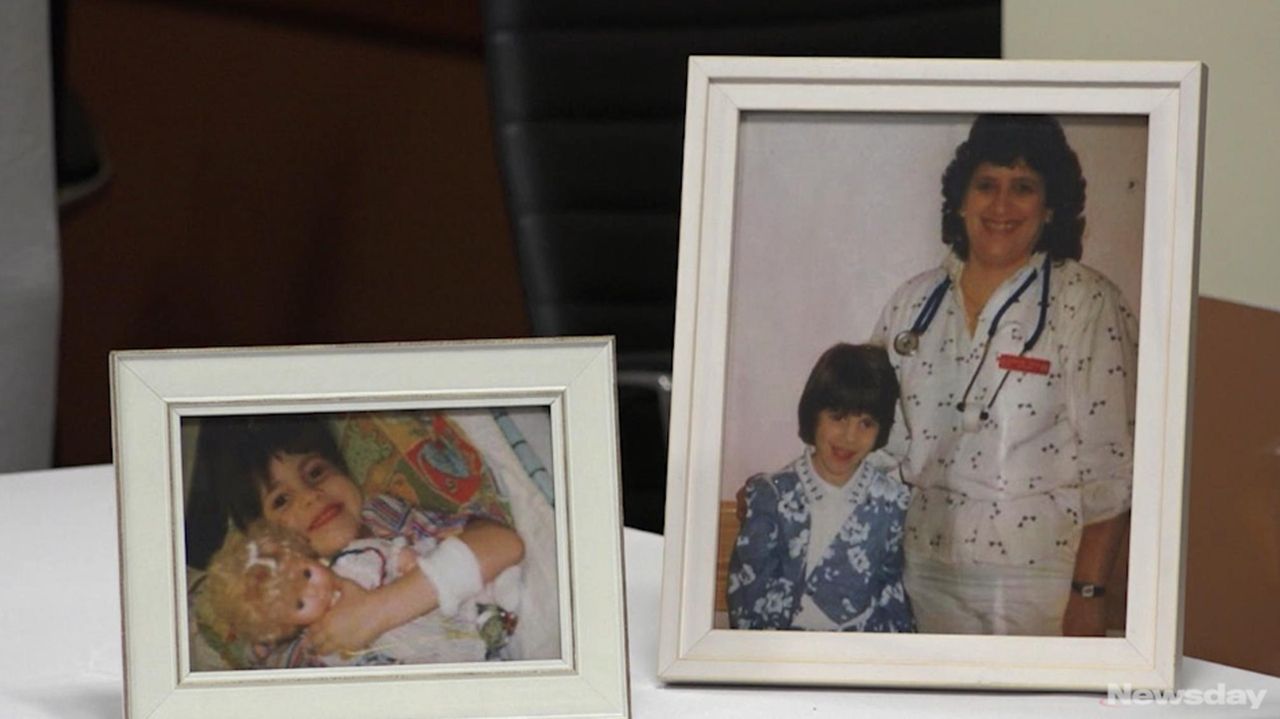 Hadassah Willig was 5 years old when she was admitted to Cohen Children's Medical Center with a swelling of the brain tissue. Maxine Hogan, then of Plainvew and now living in Florida, was Hadassah's nurse at the time. Twenty-five years later, on Friday, July 14, 2017, Hogan reunited with Willig, who was inspired to become a nurse herself, at the Long Island Jewish Valley Stream Hospital. Credit: Howard Schnapp

Hadassah Willig has held onto a potent memory for 25 years: The nurse who not only helped her emerge from a coma at age 5 but also served as an inspiration for her own career in nursing.

“I searched all over for her, everywhere,” said Willig, 31, who lives in Queens, and was excited, finally, to see her favorite nurse again. “I remember everything about being in the hospital. I remember Maxine. I haven’t forgotten any of it.”

Hogan, 58, a pediatric nurse at the former Schneider Children’s Hospital in New Hyde Park, was in charge of a desperately ill little girl 25 years ago. Doctors had diagnosed encephalitis, inflammation of the brain. The life-threatening condition caused young Willig to drift in and out of a coma. She was hospitalized for weeks.

Willig said her illness started out as chickenpox. However, she also had eczema, the itchy, inflammatory skin condition that probably exacerbated aggressive scratching that caused an infection, which in turn led to encephalitis.

“I remember taking care of her and that she was so sick. But when patients are in a coma, they can still hear you. So I would go to her room and talk to her because I knew she could hear everything I was saying,” the former Schneider pediatric nurse said.

Schneider has since been renamed Cohen Children’s Medical Center, a division of Northwell Health. The two nurses were reunited during a news briefing Friday, which featured an enlargement of a snapshot of Willig and Hogan taken by Willig’s mom during her daughter’s hospitalization.

Willig said there is no question that Hogan’s skills as a nurse inspired her own career choice.

The reunion came about after Northwell officials heard Willig’s touching story about the pediatric nurse who helped save her life. Willig had searched for Hogan at nursing conferences and had scoured the Northwell website for any mention of her. Her Northwell colleagues ramped up the search and found Hogan, who works at Broward Health, a medical center in Coral Springs, Florida.

Hogan said she was shocked when she got the call and learned that one of her patients not only remembered her but recalled her nursing skills.

“You don’t know how surprising it was,” said Hogan, who grew up in Plainview and spent much of her life on Long Island until moving with her husband, Matthew, and family to Florida in 1994.

Willig, who brought her 10-month-old daughter, Ella, to the news conference, said she already has an inkling of what lies ahead: “She might be the next generation to go into nursing,” she said.