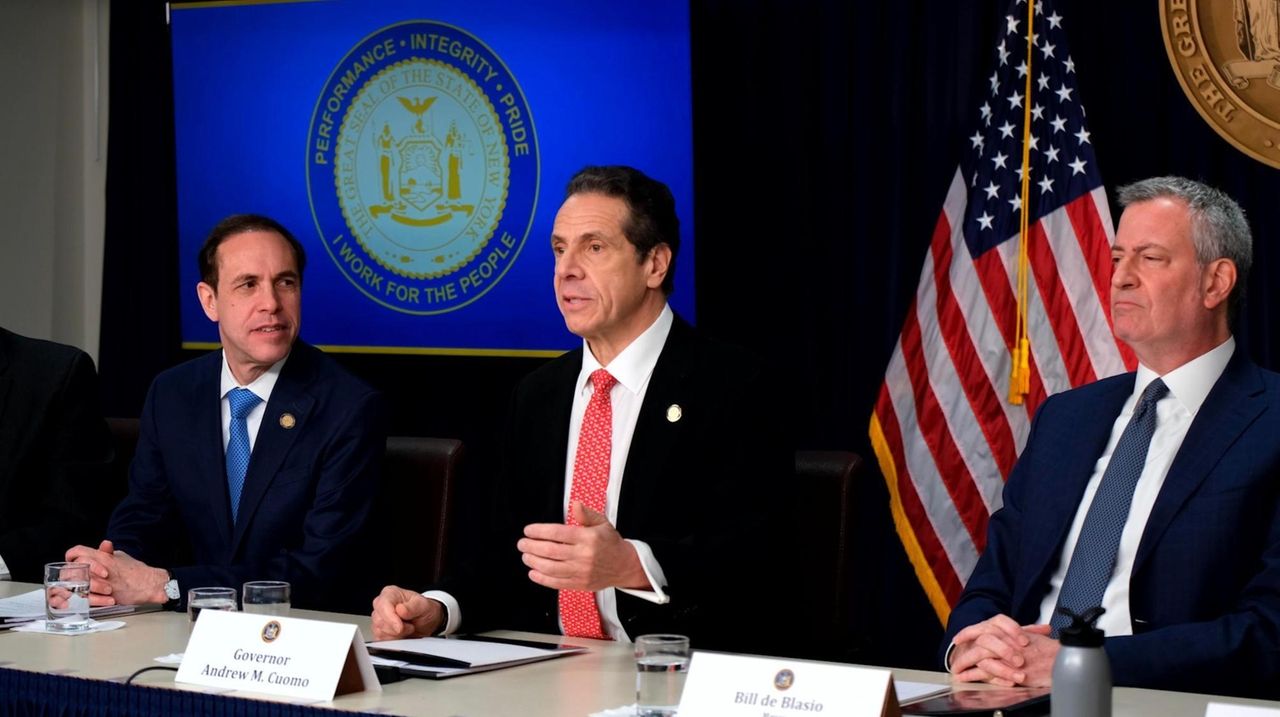 Gov. Andrew M. Cuomo on Monday pledged to ramp up testing for possible cases of coronavirus in New York, aiming to process samples for at least 1,000 people a day.

"The more testing, the better,” he said at a Manhattan news conference with New York City Mayor Bill de Blasio. “Test as many as you can and then isolate those people so you reduce the spread.”

Cuomo also said the state would be instituting new cleaning procedures for schools and public transportation. And de Blasio said the city is setting up its own “early detection system,” in an effort to control the virus' spread and better track cases.

Cuomo and de Blasio tried to calm anxiety about the spread of the potentially fatal virus after the first confirmed case in the state was announced Sunday — a 39-year-old health care worker from Manhattan who returned last Tuesday from a trip to Iran.

Later Monday, Cuomo said the state's health insurers will now be directed to waive cost sharing associated with testing for the virus including emergency room, urgent care and office visits. He said there will be no co-pay for testing for state residents on Medicaid.

As of Monday, there were 62 people in Nassau County and 25 people in Suffolk County under voluntary home isolation.

In the United States, six people have died from the virus, all in Washington state, according to health officials.

The virus, which causes the COVID-19 disease, brings on the respiratory illness and has sickened more than 88,000 people around the globe and killed more than 3,000 people, according to the World Health Organization.

The Manhattan woman has not been hospitalized, and Cuomo described her case as “mild,” with some respiratory illness. The woman’s husband, also a health care worker, has been tested and is likely to have the virus, officials said. They are both in their home, and Cuomo said the woman took precautions to avoid contact with the general public.

“She did textbook everything right,” Cuomo said. She and her husband "have been in a controlled environment. We don’t believe she was contagious when she was exposed to other people.”

Cuomo said that health officials plan to contact the other passengers on her flight from Iran, as well as the car service driver who took her home. She did not take public transportation.

So far, 32 people have been tested in the state for coronavirus, and 30 of the samples came back negative. Results for the Manhattan woman’s husband remain pending.

At first, samples could only be processed by the U.S. Centers for Disease Control and Prevention. Over the weekend, New York State’s Wadsworth Center laboratory received approval from the federal government to test for coronavirus. Officials said the Wadsworth lab, whose tests will be paid by the state, can turn around results within three to five hours.

De Blasio said the city would have the ability to run tests locally by the end of the day Monday, with funding from private insurance or the city. He said the city expects to receive federal dollars to reimburse the cost.

The state Education Department said it is working with the state Health Department to develop updated guidelines for schools focused on recommendations from the CDC.

Current CDC guidelines suggest testing people with symptoms of respiratory illness, such as fever, cough and shortness of breath — if they have had contact with a lab-confirmed COVID-19 patient within 14 days of symptoms onset or a history of travel to China, Iran, Italy, Japan and South Korea within the same period. People with very severe symptoms, such as pneumonia, may also be tested even if they have not had travel or contact with a lab-confirmed patient.

U.S. Sen. Chuck Schumer said he is pushing for billions in federal aid to help governments and health institutions, including on Long Island, to deal with the outbreak. Negotiators in Congress are close to a $7 billion to $8 billion deal.

The State Legislature is expected to approve $40 million in emergency spending sought by Cuomo, Senate and Assembly officials said Monday.

At the same time, Northwell Health system officials said they have been authorized by the federal government to begin coronavirus testing. They should be able to start with blood tests for at least 75 people a day, quickly increasing into the thousands, said Dr. Dwayne Breining, executive director of Northwell's labs.

"There is still a lot we are learning about the novel coronavirus, but one thing is certain: It’s going to take dollars to tackle,” Schumer said. “Across Long Island, that means counties, localities and hospitals will likely spend millions of dollars, collectively, over the next few months to confront the crisis and guard public health.”

Pharmacy chains in the region said they're running short on hand sanitizers, but are otherwise generally well-stocked with other hygiene products.

"We are working with our suppliers to meet customer demand for hand sanitizers and masks," said Joe Goode, senior director for corporate communications at CVS. "This demand may cause temporary shortages for these products at some store locations in the region."

Goode added that there are no shortages of disinfectant wipes and sprays.

A Rite Aid spokesman said it, too, has seen an increase in interest in hand-sanitizer products, adding that Rite Aid is doing its best to "manage our inventory."

A spot-check of seven pharmacies and supermarkets in western Suffolk, as well as a BJ's in Farmingdale, showed most products well stocked, except for hand sanitizers only available in limited supply at two locations.

New York issued the following recommendations to the public to help prevent the spread of the coronavirus that causes the COVID-19 disease:

• Avoid touching your eyes, nose and mouth with unwashed hands.

• Stay home when you are sick.

• Cover your cough or sneeze with a tissue; then throw the tissue in the trash.

• Individuals who are experiencing symptoms and may have traveled to areas of concern or have been in contact with somebody who has traveled to these areas should call ahead to their health care provider before presenting for treatment.

For more on coronavirus: What is coronavirus and how to protect yourself?

MTA: 'Doing everything we can' in response to coronavirusMTA stations, buses and trains serving NYC Transit, MTA Bus, Access-A-Ride, LIRR and Metro-North will be cleaned daily and sanitized every 72 hours, the transit authority says. Trump calls for speedup of vaccine developmentHe suggets federal regulators may be able to fastrack the approval process.+ Coronavirus: How can you protect yourself?How does coronavirus spread? Local medical experts answer commonly asked questions about the virus, also known as 2019-nCoV. How to talk to kids about the coronavirusParents should downplay the frenzy and emphasize the precautions, experts say.