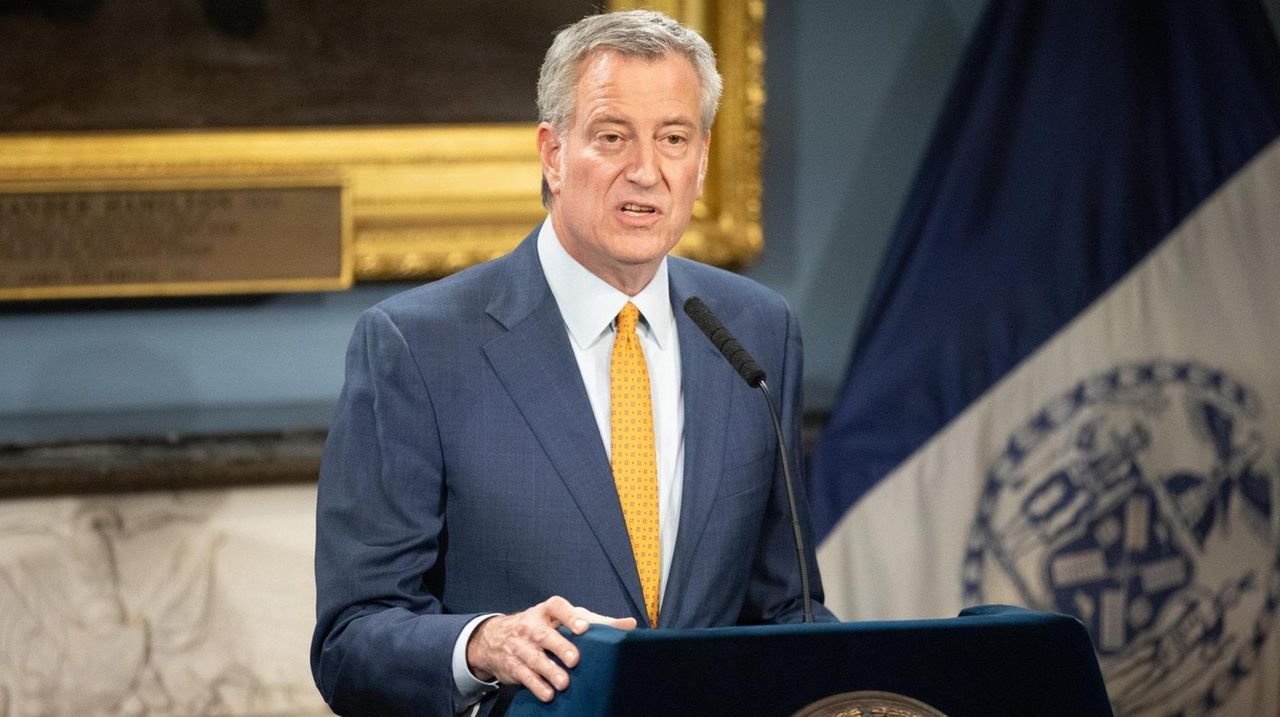 On Sunday New York City Mayor Bill de Blasio announced the closing of all city public schools. The earliest date that schools might reopen would be the Monday after April break, but the mayor said the closings could last the rest of the school year. Credit: Newsday / Matthew Chayes; Kendall Rodriguez

This story was reported by Vera Chinese, David M. Schwartz and Matthew Chayes. It was written by Schwartz.

All Nassau and Suffolk schools and public schools in New York City and Westchester will be closed Monday in an unprecedented effort to try to slow the spread of the coronavirus.

The schools on Long Island will be shut for two weeks, officials said.

"There is evidence that the virus is already present in many communities we serve, and our efforts now must be aimed at preventing its spread," Suffolk County Executive Steve Bellone said in a statement. "As part of our larger social distancing efforts, we believe that closing schools is the right thing to do at this time."

Both Nassau and Suffolk executives collaborated with school superintendents and health officials before closing the schools. County officials said they also weighed the burden closing schools would put on parents to find childcare, and for students in need who rely on schools for breakfasts and lunches.

“I understand the gravity of this action and what it means for every community in our county, as well as for the families and caretakers of our students, especially health care workers with kids in school,” Nassau County Executive Laura Curran said.

Nevertheless, she said, closing the schools "is the right thing to do to protect our students, teachers, school workers and family members, parents and grandparents.”

Curran called the move “one of the last steps” to try and slow the spread of COVID-19.

New York City Mayor Bill de Blasio said at a news conference Sunday that the city schools — the largest school system in the country with 1.1 million public school students — would not reopen until April 20 at the earliest and "we may actually have to go out for the whole school year." He said students will begin learning remotely as of Monday, March 23 and teachers will get training for online instruction this week starting Tuesday.

The Diocese of Brooklyn and the Archdiocese of New York had already announced one-week closings starting Monday for Catholic elementary schools and parish schools. 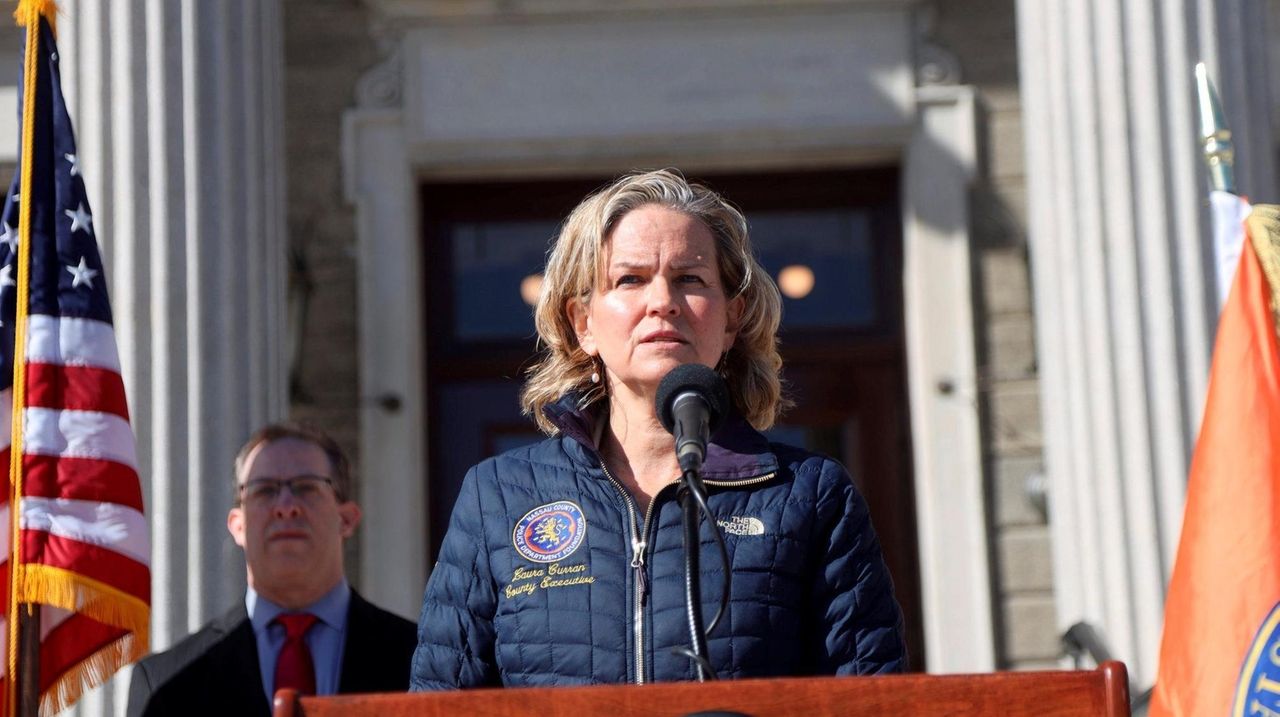 Laura Curran: All Nassau schools closed beginning Monday Nassau County Executive Laura Curran held a news conference on Sunday to announce that all schools in the county will be closed for two weeks starting Monday, as a means to combat the coronavirus pandemic. Credit: Howard Schnapp

The mayor said there have been five deaths in New York City from coronavirus and 329 confirmed cases. He also made other announcements aimed at mitigating the virus, such as requiring that all city hospital suspend elective surgeries. Northwell Healh on Long Island had taken similar measures.

Cuomo said New York City had 24 hours to formulate a plan to provide meals to students and childcare for parents, especially healthcare workers and first responders.

"We will close these schools but it needs to be done with these contingencies in mind so that children are not harmed and our hospitals aren't understaffed — otherwise we cut off our nose to spite our face," Cuomo said in a news release.

Long Island's county executives said they would work with districts to provide meals for students in need and were developing plans to help provide child care for vital healthcare workers. As of Sunday afternoon, the statewide number of confirmed cases had climbed to 729, including 98 in Nassau County and 47 in Suffolk.

Curran said she spoke with Cuomo about developing a plan to address both concerns. “School facilities will be closed for instruction but administrators and teachers can still use school buildings for distance-based learning as well as distribution of grab-and-go lunches,” she said at a news conference Sunday morning.

Bellone said in a later conference call that they also had to balance closings with the child care and meal issues. "The truth is when dealing with an unprecedented situation like this, there are no easy answers," he said. "There are always tradeoffs.

Fauci: Be prepared 'to hunker down significantly more'

Confirmed cases are expected to grow as testing becomes widespread.

With more than 434,000 public school students on Long Island, the decision to close the schools will have an enormous impact but officials said they made it to mitigate the spread of the highly contagious virus that has become a global pandemic. The virus appears to be less dangerous for younger people without underlying health issues, health officials said, but they can carry the disease back to older relatives.

County health officials also urged people not to attend weddings and other large gatherings, and stay away from crowded restaurants and bars.

Six feet can save lives in coronavirus outbreak

There were 90 confirmed cases of COVID-19 in Nassau County, 314 mandatory quarantines, 18 hospitalizations and two people in critical condition, Curran said Sunday morning. On Saturday, Curran said 10 people were hospitalized and three were critical. Similar figures were not available for Suffolk.

“We expect these numbers now to really increase,” she said, as testing becomes more widespread this week and the virus likely spreads.

“I've gotten numerous calls about weddings and bar mitzvahs and sweet sixteens and other parties. It's not a good idea,” Eisenstein said. “Even if it's young people getting married and having sweet sixteens, we know grandparents go to those events. We don't want to see a celebration lead to a funeral.”

“We don’t want to see kids running around going to movies,” he said. “It’s about social distancing.”

"This period of time should not be considered a vacation from school, but rather a time to minimize unnecessary social contact and a time to use all precautionary measures to potentially reduce the spread of this virus,"  Nicholas Stirling, superintendent of the Valley Stream 30 district and president of the Nassau County Council of School Superintendents, said in a statement.

Westchester County Executive George Latimer said on a conference call Sunday that an executive order closing those schools would be issued on Monday, once details about child care for healthcare workers and first responders were settled.

Bellone and Curran said they were also discussing child care plans with school superintendents, though they did not announce any specific special arrangements.

Curran and Eisenstein said they were disturbed to see long lines at packed bars last night .But, Curran added, “we're not making any plans to close bars and restaurants.”

In Nassau County, starting Monday employees “deemed non-essential will stay home until March 20, when the situation will be reassessed,” Christine Geed, a county spokesperson, said in a statement. “Some essential employees will also be asked to work remotely while still functioning in their regular capacity.”

Law enforcement and Department of Health employees will continue to report to work as usual, she said.

Suffolk County officials did not respond to a request for comment.

Parks and outdoor recreation centers remained open. Nassau County golf facilites on Saturday had a record day, she said. "I'm glad to see people going out and enjoying our green spaces," she said.

A letter from the publisherThe health and safety of our Newsday family — our subscribers, single copy readers, advertisers and of course, our employees — is of paramount importance to us here at Newsday. Trump still sees pandemic under 'total control'He told the nation "we have tremendous control of" coronavirus. Other federal officials clarified that control was a goal, likely months from reality. Coronavirus: How can you protect yourself?How does coronavirus spread? Local medical experts answer commonly asked questions about the virus, also known as 2019-nCoV.