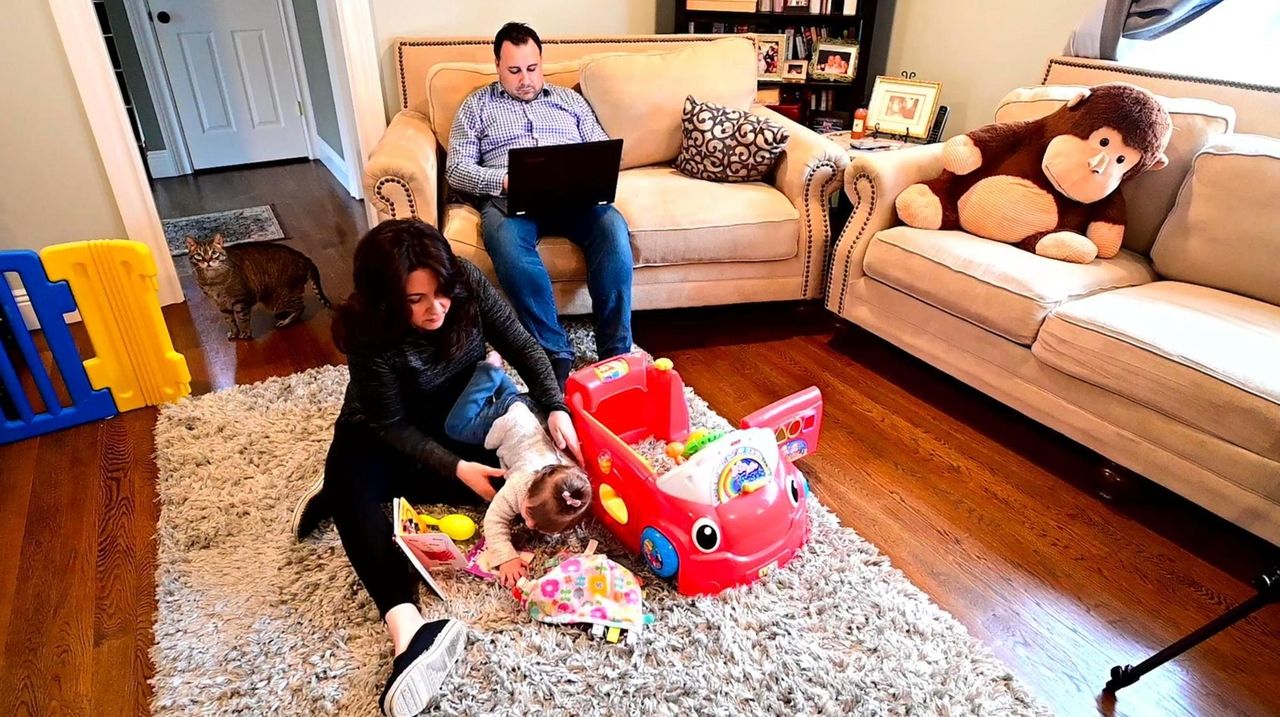 Anthony Curraro and Cara Gargano of Old Westbury practice what they call "normal" tactics for their three children to stay clear of the coronavirus, but aren't doing anything different or panicking about it. Credit: Newsday / Thomas A. Ferrara

If a thermometer could measure fear of the coronavirus, Cara Gargano of Old Bethpage would have a temperature of 98.6 and Jacqueline Silva of Lindenhurst would be closer to 104.

Gargano, 40, is a real estate agent who has two children in elementary school in the Plainview-Old Bethpage School District, which has been closed this week because of coronavirus concerns. But she’s not anxiety ridden, she says.

“What are we going to do, live in a bubble?” she says.

Then there's Silva, 28, who works in retail sales.

“All of these buzzwords like ‘epidemic,’ ‘panic,’ ‘outbreak’… it’s nerve-wracking,” she says. “It’s to the point I’m using Lysol spray for my doorknobs in my apartment to ridiculous manic levels. It feels like the end of the world, and I have to distance myself from everything.”

Although Gargano and Silva represent extremes in their responses to the virus outbreak, interviews with many Long Islanders indicate that they fall somewhere in between. And their feelings of anxiety and fear — or lack of — may veer to one end of the spectrum or the other on any given day depending on a new development, conversation or interaction.

The temperaments of individuals before this crisis will affect how they react now, psychologists say — people who tend to be anxious will be triggered further, and those who don’t will have an easier time.

Why is it a challenge to stay calm? The psychology of fear is biological, social and emotional, experts say.

Humans have always experienced anxiety as a defense mechanism to danger, says Fred Zelinger, a Cedarhurst psychologist. “Anxiety is fundamentally a survival need. If something worries us, we end up doing something to be safe, to avoid the danger,” he says.

But it’s no longer a sabre-toothed tiger that’s the threat, Zelinger says. Now it’s COVID-19, and the “doing something” might be frantically searching for hand sanitizer or stocking up on food in case of a quarantine.

“Will I be safe?’ That’s what this is all about,” agrees Deborah Serani, a psychologist in Smithtown who teaches at Adelphi University. Catastrophizing--mentally jumping right to the worst-case scenario--is at the root of much of this fear, Serani says. “You want to be reasonable with your thinking.”

Reasoned planning and adjustments to daily life are positive ways to manage fear, Zelinger says. “You want to regain a sense of control.”

Mary Czaja, 62, of Bay Shore, who is on disability with osteoarthritis, says she is taking some precautions such as avoiding crowds, but she’s also not “freaking out.” “I have a healthy respect for what’s going on,” Czaja says. “You always respect your enemies. The virus is the enemy.”

Humans are social creatures and we live in groups. That means we often also react to follow the herd, experts say.

Zelinger and his wife, Laurie, are both psychologists who understand the mechanics of anxiety. Yet on a recent visit to Costco, where they saw shoppers stocking up on cases of water, they felt sucked in and bought a case even though they have a water filtration system at home.

“We did this impulsively, based on what everyone else is doing,” Fred Zelinger says. And when they were on line, Laurie noticed a sign saying there was a cap of two cases of water per family. “I’m whispering to Fred, ‘Should we get a second one? Just to be safe maybe?’” she says.

A barrage of information is coming at us 24/7 from newspapers, television, websites, Facebook, Twitter. The situation is changing from hour to hour and we get alerts pinging on our cellphones throughout the day.

“I’m trying so hard to mute it,” Silva says. She tries to focus on facts, on how low the odds might be that she will get the virus.

Our infatuation with social media is now a double-edged sword, psychologists say. It helps us stay in touch, but it also foments hysteria and spreads misinformation.

“A lot of this feels like the game of telephone,” says Mike Evans, owner of 4GK Martial Arts in Patchogue and father of a 15-year-old girl. Someone will say, “I heard 80,000 died when it was really 80,000 exposed,” Evans says. That spreads panic, he says.

Some people also say that the unrelenting media coverage is causing an overreaction across the board.

“I meet with clients and they won’t even shake my hand. It’s a little over the top,” says Dina DeVito, 45, of Selden, who is a landscaper in the Hamptons. “Between social media and regular news, it has been completely blown out of proportion.”

It’s OK to shut it off, says Suzanne Phillips, a psychologist in Northport. “If you never turn your TV or radio off or stop checking your phone, you’re going to be in a state of hyperarousal,” Phillips says. “It’s going to deplete your resources. You’re going to be anxious for too long. That’s going to impair your judgment when you need it.”

WE HAVE A SORT OF PTSD

Long Islanders may be having an emotional reaction to the disruption of normal life similar to PTSD, having lived through crises such as 9/11 and superstorm Sandy, psychologists say.

“Long Island has somewhat of a history of being in the eye of some real catastrophes,” says psychologist Serani. When such crises repeat themselves, there’s an effect psychologists call “chain trauma,” similar to post-traumatic stress disorder. “COVID-19 will be the next link in the chain,” she says.

The uncertainty of what lies ahead in the coming weeks is unnerving. “The unknown is terrifying,” Phillips says. “Our normal has been disrupted. I don’t think we ever could imagine in a highly developed country we would feel so helpless.”

Keep seeking ways to feel in control, the psychologists urge. Exercise. Listen to music. Take a walk on the beach. Breathe.

“There certainly is a fear this may get out of hand. We simply don’t know,” says Evans, the martial arts business owner. “I’m not super concerned. It will be a temporary pain.”

Long Islanders rush supermarkets amid coronavirus fearsTraffic backed up on Broadhollow Road from drivers waiting to enter the parking lot of the Melville Costco.