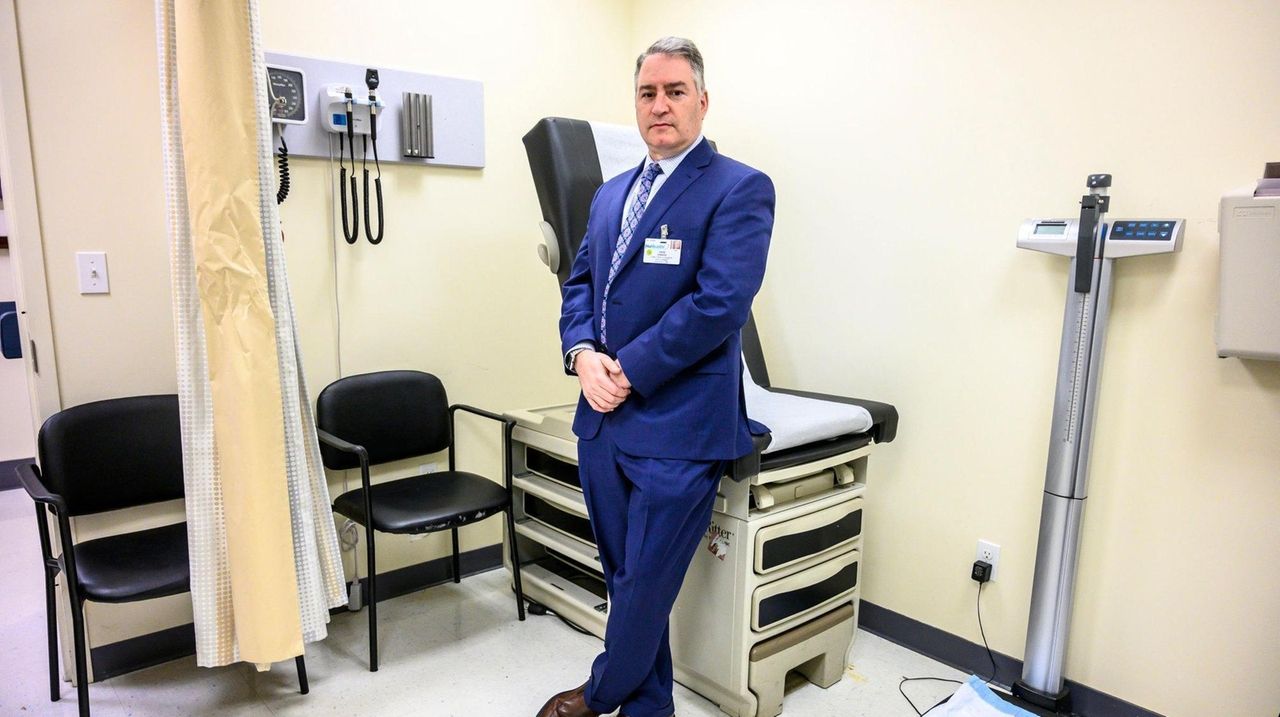 On Monday, a new federal rule went into effect that could discourage millions from seeking health care, even as health officials warned the nation to prepare for outbreaks of the coronavirus. David Nemiroff, CEO of the federally qualified health centers in Nassau County, is concerned people will choose their immigration status over their health care. Credit: Newsday / Alejandra Villa Loarca

A new federal rule could discourage millions of people from seeking health care as federal health officials warned the nation to prepare for outbreaks of the coronavirus, health experts and immigration advocates say.

Under the new “public charge” rule, the Department of Homeland Security can deny applications for permanent resident status or certain visas if the immigrant uses public services like federally funded Medicaid, food stamps and housing assistance. Denials could also be based on age, health, assets, financial and family status, education and skills.

Now health providers, health analysts and immigration advocates are concerned with declines in immigrants enrolling or re-enrolling in Medicaid and other health programs for which they or their U.S.-born children qualify. The rule applies to immigrants in the country legally.

Health care providers and advocates said they also fear immigrants will avoid health care altogether. That comes as more than 100 people on Long Island are being monitored for the virus after travel to China.

Sara Rosenbaum, a professor of health law and policy at George Washington University's school of public health, said the new rule could mean people shield themselves and their families from the health care system despite urgent need for care "because they fear the consequences of being perceived as needing care."

“Of course it is a threat,” said Rosenbaum, who is also director of the university's Center for Health Services, Research and Policy. “It’s not just [about] people who have a serious and chronic condition, but we are living in a situation now where there are heightened concerns about the spread of a communicable disease that no one understands.”

And, she added, at a time when a possible pandemic is throwing the global economy into signs of an “economic meltdown, the last thing you want is for people to stop showing up for health care. And this is especially true in large communities where you have higher percentages of immigrants. You want them to seek out care at the earliest possible time.”

Immigration authorities had previously used cash aid and long-term institutionalization against green card seekers. The Trump administration expanded the definition of public aid to noncash programs such as Medicaid. It will also consider whether an  applicant can become a public charge at any time in the future by looking at  his or her current income, health and skills.

The Trump administration proposed the rule change in August to take effect in October, but the change was challenged in court. In a January ruling, the U.S. Supreme Court said it could take effect on Feb. 24 even though it is still being litigated.

Health authorities are urging immigrants to seek health care, emphasizing that many health programs are open to them — including emergency Medicaid or other emergency relief — and won’t count against them under the public charge rule.

Children on Medicaid under age 21, pregnant women, those granted political asylum, refugees, some special visa holders, victims of trafficking and other crimes, and members of the military and their families are entirely exempt to the Public Charge Rule.

Also exempt are those in the Essential Plan, Child Health Plus and a Qualified Health Plan at any level, even if premiums are free, according to the state Health Department. Green card holders are exempt unless they have left the country for more than six months, or have certain criminal convictions and want to return to the United States.

“We have been working across state agencies and with community partners to get accurate information to immigrants and combat misinformation about the Public Charge Rule in immigrant communities,” said Jonah Bruno, spokesman for the state Health Department. Immigrants can consult immigration  counselors confidentially and at no cost by calling the state Office of New Americans at 800-566-7636, he said.

But the new rule has only added to the pervasive fear felt by many in the immigrant community under the Trump administration, said Rebecca Sanin, president and CEO of the Health and Welfare Council of Long Island, which services about 8,000 people a year and is an umbrella organization for hundreds of nonprofit organizations.

“We provide direct services, and lots of folks who work with my team are expressing a desire not to recertify for things like SNAP [food stamps] and Medicaid,” she said, adding that the nonprofits under her organization’s umbrella were also "seeing people choosing not to recertify or get services because of the climate of fear and change in policies targeting immigrants.”

Many families have mixed immigrant status, where “children or parents are American citizens but someone in the family isn’t, and the fear is so palpable that entire families including people who are not impacted by the Public Charge Rule are dropping off of human services,” said Sanin.

David Nemiroff, president and chief executive officer of Long Island FQHC, the federally qualified health centers in Nassau County affiliated with Nassau University Medical Center, said, “Our biggest fear is that people will choose their immigration status over their health care, and where does that leave us regarding COVID-19?” as the coronavirus is now known.

Already, he said, the centers have seen an impact on its WIC program (Special Supplemental Nutrition Program for Women, Infants and Children), which provides food, referrals and nutrition guidance to poor families. “Four or five families a day were not coming in to recertify and people, even those who were perfectly legal, wanted to disenroll from the program.”

Chris Keeley, assistant vice president for ambulatory care operations at NYC Health + Hospitals, urged immigrants to come in for care and stressed that the number of people getting the kind of federally funded health coverage that would disqualify them under the public charge rule is, he said, “very small.”

The rule “does pose a risk that people may be fearful and our job right now is to combat that fear,” he said, adding that free confidential counsel would be made available to help people assess their own risk. “We want them to understand the public charge is not nearly as broad as they might believe.” The city Health Department representative Stephanie Buhle agreed the "fear and confusion" the rule caused is concerning.

Visiting a doctor, getting health care services or signing up for the NYC Care program are not considered “public benefits” in the new “public charge test,” she said. Free confidential advice and connection to legal help is available at the ActionNYC hotline at 800-354-0365 or by calling 311 and saying ActionNYC. Long Islanders can also call the Empire Justice Center at 631-650-2306 or leave a message at 631-650-2315 or 2317.

Much of the public health focus has been on the rule’s impact on use of Medicaid and other government programs, Rosenbaum said. But equally concerning to her is that now health problems, even among groups entitled to get coverage, can be used against a family trying to get permanent legal status. People might be so frightened of the rule, she said, "they might walk away from health care entirely.”

About 20% of residents in New York State live with at least one nonresident family member, Nemiroff said. As the coronavirus threat looms, he added, the public charge rule change not only “unfairly targets” vulnerable people, “It's just really poor timing on top of that.”