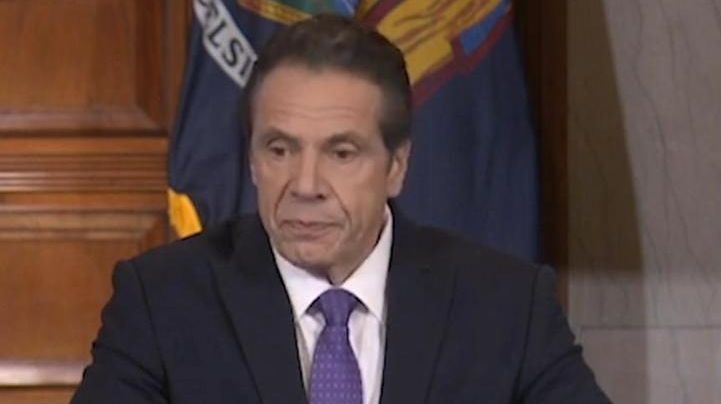 Gov. Andrew M. Cuomo spoke Wednesday at a news conference on the need to increase testing and about the new cases confirmed since Tuesday, bringing the state's total to 216. Credit: NY Gov Office

SUNY and CUNY college students will study off-campus for the remainder of the spring semester to protect them from the coronavirus outbreak, said Gov. Andrew M. Cuomo, as the state's number of confirmed cases rose again Wednesday.

Cuomo said the measure is "a way to reduce density" and will take effect March 19.

“The dorms may stay open to accommodate particular student situations,” said Beth Garvey, Cuomo's special counsel and senior adviser. “What we are trying to do in coordination with SUNY and CUNY is to reduce the congregation of large numbers of people in classroom settings so students will be able to return home if that’s what they want to do.”

The number of confirmed coronavirus positive test results in New York State grew by 43 cases since Tuesday to 216, as Cuomo said that the state is looking to step up testing with help from 28 laboratories. 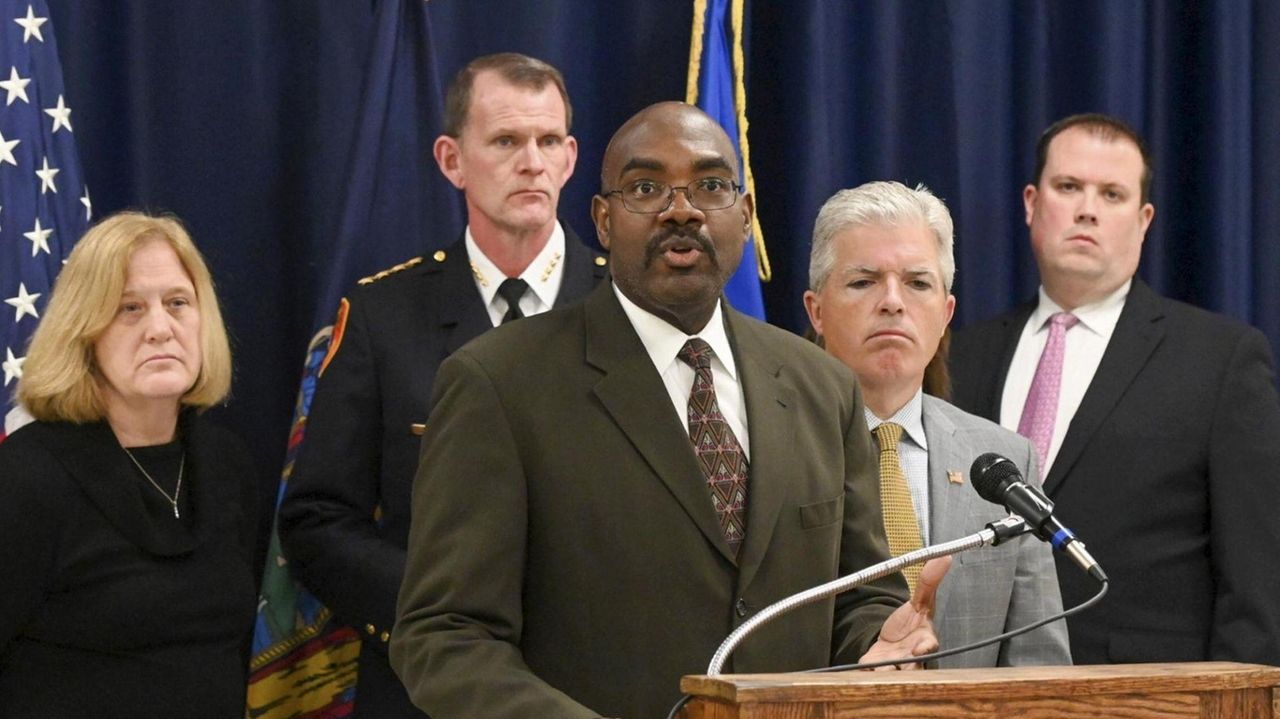 The World Health Organization declared the outbreak a pandemic, defined as "the worldwide spread of a new disease."

In New York City, the St. Patrick's Day Parade was postponed for the first time since 1762.

SUNY and CUNY students would “continue their studies at a distance either through online or other mechanisms,” Garvey said.

Cuomo said some classes and activities, such as labs, may still be held on campuses.

Melissa DeRosa, secretary to the governor, said discussions with SUNY and CUNY on how to handle graduations were continuing, but, she said, “The expectation is, yes, a large number of them will not be happening in person.”
Cuomo said he will ask the State Legislature to pass a bill mandating that employers pay quarantined workers to prevent the virus' spread, as the state is committed to doing.

"Our testing capacity is nowhere near where it needs to be," Cuomo said.

Cuomo said 28 labs will begin testing for the virus. They are the labs that the health department has worked with, and they have expertise in virology, he said.

Some, though, are still awaiting U.S. Food and Drug Administration approval of their testing protocols, Cuomo said.

The state health department is working to develop a test for antibodies that fight COVID-19, Cuomo said. That would allow the state to find people who at one time carried the virus, to better track the disease's spread, he said.

Cuomo also said he has spoken with hundreds of business leaders and asked them to voluntarily allow employees to work from home or work different shifts to keep them further apart from each other and avoid contracting the virus.

20 cases in Town of Hempstead

In Nassau, there are 20 cases in the Town of Hempstead, three in the Town of Oyster Bay and two in the Town of North Hempstead, County Executive Laura Curran said Wednesday morning, before Cuomo announced an additional three cases. There are still 10 test results pending, she said.

Nassau has 153 people in mandatory quarantine and 79 in “precautionary quarantine,” Curran said.

The two latest Suffolk cases are men who live in the Town of Brookhaven, one in his late 30s and the other in his early 30s, County Executive Steve Bellone said at a news conference Wednesday.

Both men are in isolation at Stony Brook University Hospital. Another man, in his early 20s, whose positive test result was announced Tuesday, also is at that hospital. He lives in the Town of Brookhaven, Bellone said.

Suffolk has eight people under mandatory quarantine, including one of the six confirmed cases, a woman in her early 20s from the Town of Southold, Bellone said.

That woman is connected to a previously announced COVID-19 case, of a man in his early 40s, now at Stony Brook Southampton Hospital and whose condition is improving, Bellone said.

In addition, a man in his 80s who tested positive is at St. Catherine’s Hospital in Smithtown.

All the confirmed cases are due to "community transmission," meaning they did not contract the virus from travel overseas, Bellone said.

The county is monitoring 72 people who recently have returned home from abroad, are under precautionary quarantine and, so far, show no signs of coronavirus, he said.

Suffolk officials said senior citizen centers in the towns of East Hampton, Southhold and Riverhead have been shut down. The centers, however, are continuing to provide services such as meals, which are being delivered to their homes, county officials said.

Seniors are considered to be particularly vulnerable to coronavirus, as are patients already debilitated by other health conditions.

Starting Wednesday, all visitors at Stony Brook University Hospital are being asked to fill out a health declaration form before entering the hospital, and visitors who are sick will be asked to leave. Only one visitor will be allowed at a time for most patients.

Suffolk IT Commissioner Scott Mastellon told legislators at the government operations committee Wednesday that officials are looking into acquiring the technology to allow county employees to work from home, “if, God forbid, we’re in a situation where we do have a significant amount of our staff working remotely."

But Mastellon acknowledged the challenges of getting the technology required for remote work, such as webcams, for nearly 10,000 employees.

The epidemic may cause local government finances to take a hit.

A report from the Suffolk County Legislature’s budget review office said the county's budgetary assumptions “very likely” will change because of reduced revenues from sales taxes, due in part to lower consumer spending, and that the county’s revenue from Jake’s 58 casino may fall.

In New York City, the number of confirmed cases of the virus has gone up sharply in the past two days.

De Blasio said in an interview with Channel 11's Dan Mannarino that the increase is due to "community spread," which he defined as when it cannot be determined how or where the exposure occurred.

"We should recognize, the more and more testing we do, we're going to find more cases," De Blasio said. "Thank God we're getting to the truth."

De Blasio said he's urging people to avoid crowded subways, work from home if possible, and commute during off hours.

The Metropolitan Transportation Authority is doubling its station sanitizing efforts, vowing to disinfect all 124 LIRR stations twice a day, up from once a day, officials said.

The plan is the latest measure taken by public transportation providers, including Amtrak and Long Island ferry operators, to prevent the virus' spread among passengers.

MTA officials said the effort would continue to focus on frequently used surfaces, including turnstiles, ticket-vending machines and handrails.

“I think the only thing that would affect that is if they [the workers] start getting a little nervous because of the panic of COVID-19,” said Peluso, adding that all cleaners will have proper safety equipment.

Sanitizing protocols will be heightened at Metro-North's station in New Rochelle, the city that has the largest cluster of confirmed coronavirus cases in the United States A dedicated crew has been assigned to the station, which also will undergo a weekly deep-cleaning, MTA officials said.

In addition, the MTA continues to disinfect its entire fleet, including nearly 1,400 LIRR train cars, every 72 hours.

Meanwhile, Amtrak, which owns Penn Station, said Wednesday it is increasing the frequency of cleaning efforts on trains and stations, and is also making antibacterial products such as wipes more readily available at stations.

Amtrak also announced that it has suspended three trains that operate between New York and Washington, D.C., “due to lower demand,” and is considering other schedule changes.

The Bridgeport and Port Jefferson Steamboat Co., which operates ferries across the Long Island Sound, announced it will operate two of its three vessels until further notice. It is increasing the number of personnel charged with cleaning vessels and terminals.

Greenport Harbor Brewing Co. in Peconic said Wednesday it has begun a “deep cleaning of the premises” after an employee tested positive for COVID-19. The employee had not been at the brewery since Feb. 24. The brewery’s tasting room and food operations will remain closed until the end of the week, the company said in a statement.

In other local developments, the Nassau Republican Party canceled one its largest fundraising events, Thursday's Theodore Roosevelt Dinner, which typically attracts about 1,000 people. It was to take place at the Crest Hollow Country Club in Woodbury.

In Nassau, the Department of Consumer Affairs is investigating alleged price-gouging for products used to reduce the risk of COVID-19 transmission, Curran said.

Fines of $5,000 have been issued to several businesses, including a gas station in Great Neck that sold $3 hand sanitizer for $10 and a card store in Hicksville that sold small bottles of 7-Eleven brand hand sanitizer for $13. A Syosset card store allegedly sold masks for the inflated price of $16 each, even though they should not be sold individually because of a contamination risk, she said.

Some health care providers are running low on protective equipment.

”Masks are the biggest challenge for us for now,” said David Nemiroff, president and CEO of Long Island FQHC Inc., a nonprofit that oversees 10 health centers in Nassau County that serve many low-income residents.

The centers, which serve 500 to 700 people a day, would have an even lower supply of masks if it hadn’t asked the county for more last week, Nemiroff said.

Cuomo's move to online prompts students to demand money backGov. Andrew M. Cuomo said SUNY and CUNY campuses will continue their studies online through the end of the spring semester, starting March 19. Is your school closed? Check our list of closingsThese are the Long Island school districts and area universities that have closed already or are planning to temporarily close in response to concerns over the coronavirus. Stony Brook waiting for machine to test for coronavirusConducting COVID 19 tests locally will lead to results within a few hours instead of at least two days, the Renaissance School of Medicine at Stony Brook University said. We ask doctors: Should you get tested for coronavirus?We talked to experts about who should and who shouldn't get tested for the coronavirus COVID-19.