Rick Horton, who was released Wednesday from the Peconic Bay Medical Center after suffering from COVID-19, waves to supporters alongside his wife, Debbie, at their home in Cutchogue. Credit: Newsday/Steve Pfost

Among the many tragic stories of Long Islanders lost to the coronavirus, there are also tales of triumph — patients who entered hospitals after feeling ill from the virus, eventually placed on ventilators, and facing long odds of surviving. But despite facing such dire circumstances, all the while wondering if they would live or die, they indeed survived, with the help of doctors, nurses and other hospital staff committed to beating back COVID-19. These are the stories of two Long Islanders who overcame the coronavirus and have returned home to their families.

LIJ celebrates 1,000th COVID-19 patient to leave the hospital On Tuesday, Juan Sanchez of Floral Park, was discharged from Jewish Medical Center as the 1,000th patient to be released from the medical center, which is part of Northwell Health.  Credit: Handout

Juan Sanchez said he never wavered from this belief: He would leave Long Island Jewish Medical Center as a winner in his weekslong battle against COVID-19.

When Sanchez, of Floral Park, was discharged Tuesday, he was celebrated as the 1,000th coronavirus patient to be released from the medical center, which is part of Northwell Health.

"I'm just glad I called an ambulance," he said. "I don't know what would have happened if I didn't. It would be bad."

Sanchez, 66, said he was having difficulty breathing and felt aches everywhere when he called for help about two weeks ago. They brought him to the medical center, where he said the first few days were rough.

"After three days, I started to feel better, but I couldn't leave until my oxygen level was back to normal," Sanchez said.

Sanchez said he is pretty sure he contracted COVID-19 at Elmhurst Hospital in Queens, where he works a back-office job that includes responsibilities in the mailroom. He said he wasn't forced to go into work.

Queens has been the epicenter of the COVID-19 pandemic in the United States, and Elmhurst Hospital has been overrun by patients.

Long Island Jewish Medical Center, on the border of Queens and Nassau County, has had hundreds of daily COVID-19 patients and continues to be crowded, said Michael Goldberg, the hospital's executive director.

"COVID has transformed this hospital over the last 37 or 38 days," Goldberg said. "A vast majority of patients do well, so we created Team Home, where when a patient leaves and gives permission, we gather in the lobby and clap them out in the lobby."

Goldberg said the hospital also plays the Beatles hit "Here Comes the Sun" whenever a patient comes off a ventilator. 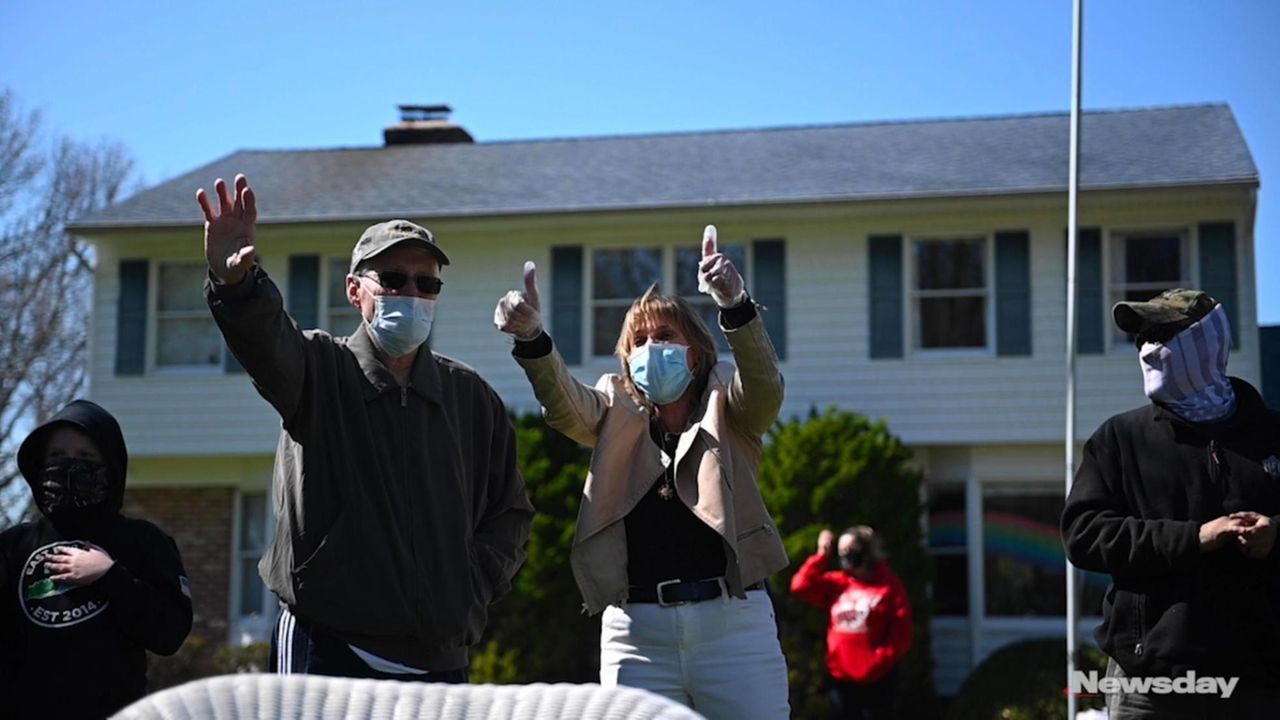 Tales of triumph amid the coronavirus tragedy Rick Horton returned to his Cutchogue home from Peconic Bay Medical Center in Riverhead on Wednesday after being put on a ventilator for five days following complications from the coronavirus, his family said. Horton was greeted by a welcome-home parade of more than 100 vehicles, including police vehicles and fire trucks.  Credit: Steve Pfost

After a grueling month battling COVID-19 and being put on a ventilator, Rick Horton beat the odds and was greeted with a hero’s welcoming parade Wednesday at his Cutchogue neighborhood.

Horton, 66, who is retired from the Suffolk County Department of Public Works, began experiencing coronavirus symptoms March 14 and less than a week later, he was admitted into the intensive care unit at Peconic Bay Medical Center in Riverhead, said his daughter, Dawn Borges.

Borges, 44, of Baiting Hollow, said the debilitating virus attacked her father to the point where he had fevers between 101 and 103 degrees for more than two weeks. Horton was put on a ventilator for five days, relatives said.

“It was very scary and difficult not being able to be there with him,” Borges said.

But now, with Horton off the ventilator and resting comfortably at home, his family is also breathing easier.

“Today is like an awakening. Being home here and sitting down next to him, it seems like an eternity since we were able to do that,” said Horton's wife of 46 years, Debbie, a retired nurse. “It was a prayer that a lot of people didn’t know was going to get answered — but it was.”

Horton was released from the hospital to a “clap out” and welcomed home to a parade that included a caravan of more than 100 vehicles, including police and firetrucks as well as signs of affection like “Welcome Home Gramps” and “Can’t Wait To Play With You.”

“There was so much cheering,” said Debbie Horton, 65.

Horton is a father of six and has 12 grandchildren, Borges said.

His relatives said they were incredibly appreciative of the work of the medical staff who saved their loved one’s life.

They “did everything possible to get him to where he is at now,” Borges said.