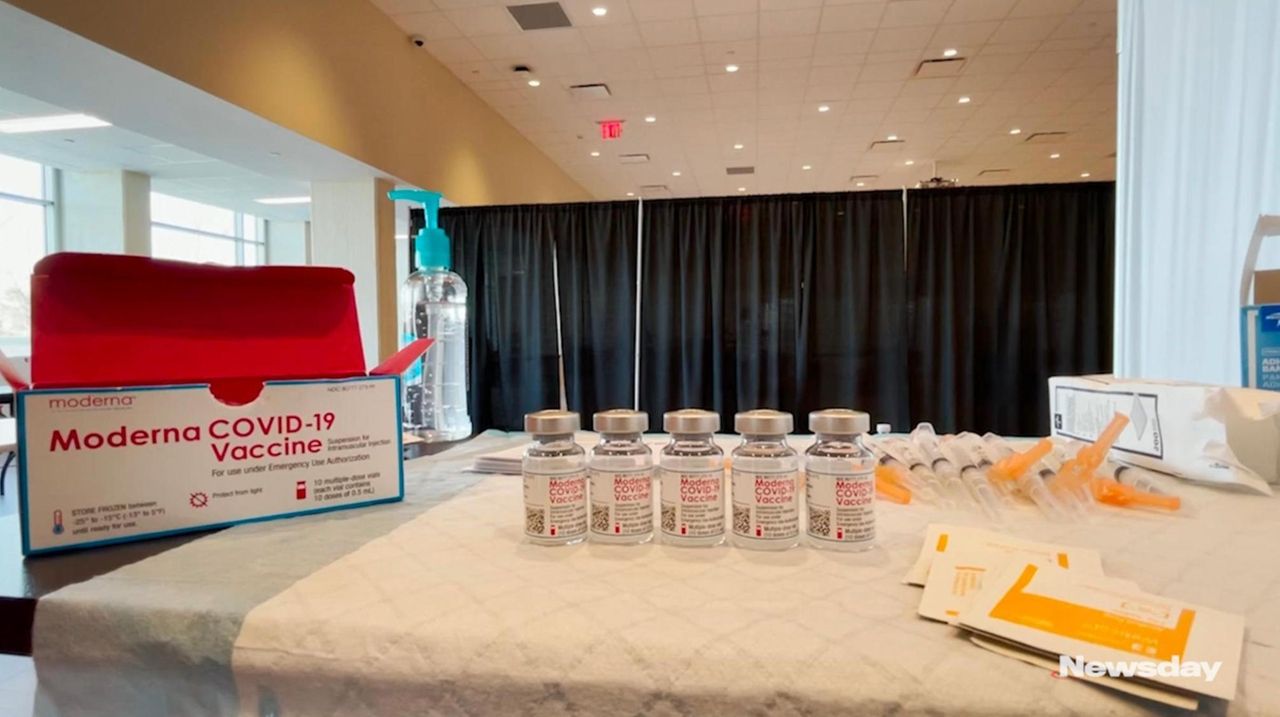 Jarret Sherrard and Danielle Miller aren't members of any anti-vaxxer movement, but neither plan on getting the COVID-19 shot. Credit: Newsday / Chris Ware

Jarret Sherrard said he's not against vaccines, but the Northport solar panel salesperson said he does not plan, at least for now, on taking the COVID-19 vaccine. He said he worries it was developed too quickly and might be unsafe.

"We miraculously came up with this one so fast," said Sherrard, 30. "I don't trust it."

That kind of doubt is a major concern as public health officials aim to ramp up COVID-19 vaccinations in the coming months. Health experts worry that the hesitancy on the part of some people to take the vaccine is energizing the broader anti-vaccine movement, said Richard Carpiano, a professor of public policy and sociology at the University of California Riverside, who has followed the movement.

The movement is receiving renewed attention as it taps into people's concerns and forms alliances with others opposed to the vaccine, such as anti-government groups, libertarians and alternative health advocates, Carpiano said. In doing so, the movement has amplified misinformation about the vaccine, which could undermine inoculation efforts and hamper the battle to stamp out the coronavirus, he said.

"COVID-19 gave them fuel for that fire," Carpiano said. "It emboldened them as they focus on health freedom and government overreach."

The anti-vaccine movement has added 10.1 million followers, almost a 25% increase, since 2019, to a total of more than 51 million, according to an analysis of 147 of the leading anti-vaccine social media accounts by the Center for Countering Digital Hate, an international nonprofit dedicated to disrupting "dangerous misinformation in digital spaces."

"They really saw this as an opportunity for growth," said Imran Ahmed, the center's chief executive. "They try to plant a seed of doubt: Is COVID-19 that dangerous? Is the vaccine safe? Can you trust your doctor?"

Experts stress that there's a difference between hard-core anti-vaccine advocates and people hesitant to take the COVID-19 vaccine, but who are not zero-vaccine proponents. Sherrard, for instance, said he had never given vaccines much thought before COVID-19, though he does not take the annual flu shot because he's concerned it will give him the flu.

More than 23 million COVID-19 vaccine doses have been administered in the United States, and a Centers for Disease Control and Prevention team said Wednesday that the vaccines look as safe as they did in the trials. Side effects included fatigue, headache, chills, fever and pain in the injection site, they said.

Demand for the vaccine remains great, and polls suggest the public’s eagerness to get it is rising across racial and ethnic groups, though Republicans and rural residents remain the most reluctant groups, according to the latest Kaiser Family Foundation survey, performed just before President Joe Biden took office.

Nearly half (47%) of the public want to get the vaccine as soon as possible or already have been vaccinated, the survey said. That is significantly higher than the 34% in December.

Dr. Anthony Fauci, Biden's chief medical adviser on COVID-19, said between 70% and 85% of the population would need to receive the vaccine to achieve herd immunity in the U.S.

A vocal movement on LI

Long Island has a vocal anti-vaccine movement that has staged several protests over the years.

John Gilmore, of Long Beach, is the New York director of Children's Health Defense, a nonprofit chaired by Robert F. Kennedy Jr. known for criticizing the safety and efficacy of vaccines and advocating for people's right to refuse vaccines for themselves and their children. Gilmore said he believes the number of supporters for that cause has grown on Long Island, fueled by those concerns about the vaccine.

"The vaccine material doesn't even say it will prevent you from catching or spreading the disease," Gilmore said.

According to the Centers for Disease Control and Prevention, the COVID-19 vaccines available in the U.S. — Pfizer-BioNTech and Moderna — have been shown to be highly effective at preventing the virus. All COVID-19 vaccines are evaluated in clinical trials and approved only if they make it substantially less likely a person will get COVID-19, the CDC said.

Based on early data from clinical trials, experts believe getting a COVID-19 vaccine also might prevent a person from getting seriously ill if stricken by the disease, the CDC noted.

For Sherrard, the decision not to roll up his sleeve is not based on any study but rather a gut feeling of distrust, he said. Development of vaccines typically takes years, but this vaccine was developed in about a year, he said.

Fauci, the top U.S. infectious disease expert, has said there was more than a decade of behind-the-scenes research that provided the scientists with a head start on the coronavirus vaccine.

Sherrard said he's long been "a little cautious" about vaccines, but made sure both of his children received all vaccines required for school.

Sherrard said he worries about the long-term effects of the vaccine. He questions exactly how contagious the virus is, noting that since the virus appeared, his family has taken vacations and visited an amusement park where masks and social distancing were loosely enforced — but nobody in the family got sick.

The threat of COVID-19 is real, said Carpiano, the California professor. It is killing thousands of Americans daily and leaving many others with long-term health aftereffects, he said. Researchers are studying whether the vaccine has any long-term effects, and Carpiano noted that adverse effects from vaccines historically appear early after inoculation.

Faith Trela, 41, of Bellerose, Queens, is a medical assistant and phlebotomist who was offered the vaccine — but declined to get it. Many colleagues in the Queens urgent-care center where she works also didn’t get vaccinated, she said.

"I’m not an anti-vaxxer by any means, but this is so new," she said.

Trela said she is still undecided on whether to eventually get vaccinated.

"I keep going back and forth," she said. "I fully believe in science. I want to be healthy, and I want there to be an end to this."

The COVID-19 vaccine faces its greatest trust gap among Black and Hispanic people, communities that have been disproportionately affected by the pandemic.

Gov. Andrew M. Cuomo and two Black members of Congress traveled this month to a public housing residence in Brooklyn to urge Black New Yorkers to get vaccinated against the coronavirus. Cuomo said vaccinations of Black, Latino and low-income New Yorkers are being prioritized in part because, in the spring, white and wealthier New Yorkers had easier access to coronavirus testing.

"We are the last to know, and therefore there is hesitancy," said Mendez, of Westbury, who is a former deputy director of the Nassau County Office of Minority Affairs.

Many people in communities of color are mistrustful of science and medicine, due to the historical mistreatment of minority patients, said Martine Hackett, director of public health programs at Hofstra University in Hempstead.

Danielle Miller, 33, who is Black, said she will not take the COVID-19 inoculation. In addition to the medical abuses against Black people, she said she's been wary of vaccines since her 10-year-old daughter developed allergies, including a severe allergy to peanuts, after receiving a spate of vaccines as a toddler.

"We do not have enough information on our body's response," said Miller, of East Patchogue, who has attended protests opposing mandates that children receive vaccinations for school. "Not enough time has gone by to tell what reactions will make themselves known."

"I try to consider myself open-minded," she said. "If the research is clear and presented in a coherent way, and enough people have received it, I might."

NY health officials: Students can be 3 feet apart in classrooms
1:54
Online instruction has been liberating, and vexing, for students with disabilities
1:31
A psychotherapist who walks and talks with clients reflects on strength
1:16
Islamic leaders: COVID-19 vaccine OK during Ramadan
2:27
Ambulance dedicated to EMT who fell to COVID-19
LI's COVID-19 positivity rate edges downward, with vaccine hurdle ahead
Didn’t find what you were looking for?