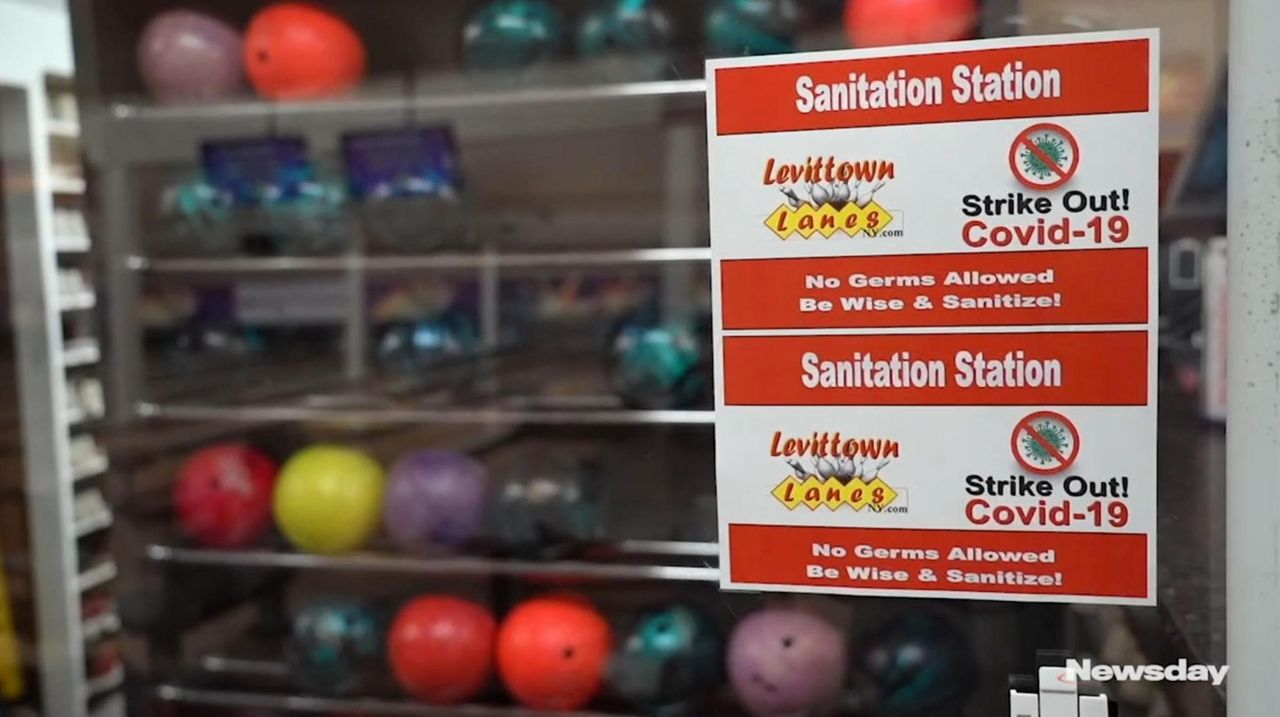 Long Islanders showed up Monday at Levittown Lanes for the first day that bowling alleys could reopen, now that Gov. Andrew M. Cuomo has lifted restrictions for alleys under the state's coronavirus guidelines. Credit: Corey Sipkin

For avid bowlers like Mike Rivelli of Levittown, 62, Monday marked the end of a long and dreadful drought — five months with out a strike, a spare or even a gutter ball.

But he was among the first bowlers to arrive at Levittown Lanes, grateful to get back in the game he has been playing for 55 years.

“It’s a relief,” said Rivelli, a paramedic and a financial adviser, adding that he bowled eight games at the iconic establishment that he and others said is more like a community center than merely a building to bowl in. “When I come home and I get to bowl, it’s a release for me. It puts me in a really good frame of mind. . . . It has always been a passion of mine.”

Monday was the first day since Gov. Andrew M. Cuomo imposed the coronavirus-related shutdown that bowling alleys could rev up again.

Keith Pappas, manager of the popular 36-lane bowling alley off Hempstead Turnpike, said he shut the doors on March 15, almost exactly five months ago. He said the opening Monday has given him hope.

“I’m ecstatic,” he said. “This is the greatest day of my life after five months of disaster.”

All of it was back: the thud and agony of the gutter ball, the low hum of the machines returning balls, and the inimitable clash of a just-right bowling ball barreling between the No. 1 and No. 3 pins for a definite strike.

“I was pleasantly surprised at how people were eager to come back to bowl,” Pappas said, adding that he opened at noon and would close at 10 p.m. — and all slots were booked. “It was actually a big, huge relief when we had everything fired up and people walking through the doors because for five months, it’s been scary.”

That said, in several signs of the times, the lanes had Plexiglas separating players, and only 18 of the lanes could be used to observe social distancing. Masks were mandatory, reservations were required to bowl, only five people were allowed in each lane and lanes were sanitized after bowling parties finished their games.

Steven Connelly, 61, of East Meadow said he was among the first to arrive Monday, too. All told, he averaged an impressive 218 points over five games, adding that he got “a lot of strikes” Monday.

Like Rivelli, he is a member of several bowling leagues and bowls several times a week,  mostly at Levittown Lanes.

“It’s a great feeling to get back in there,” he said, adding that Levittown Lanes, which has been a fixture in the community for many decades, is a treasured institution in the area.

“That bowling alley is more than just where people go to bowl,” he said, adding that he has been bowling there for 40 years. “We all go there to hang out. . . . It’s a way of life for some people in Levittown.”