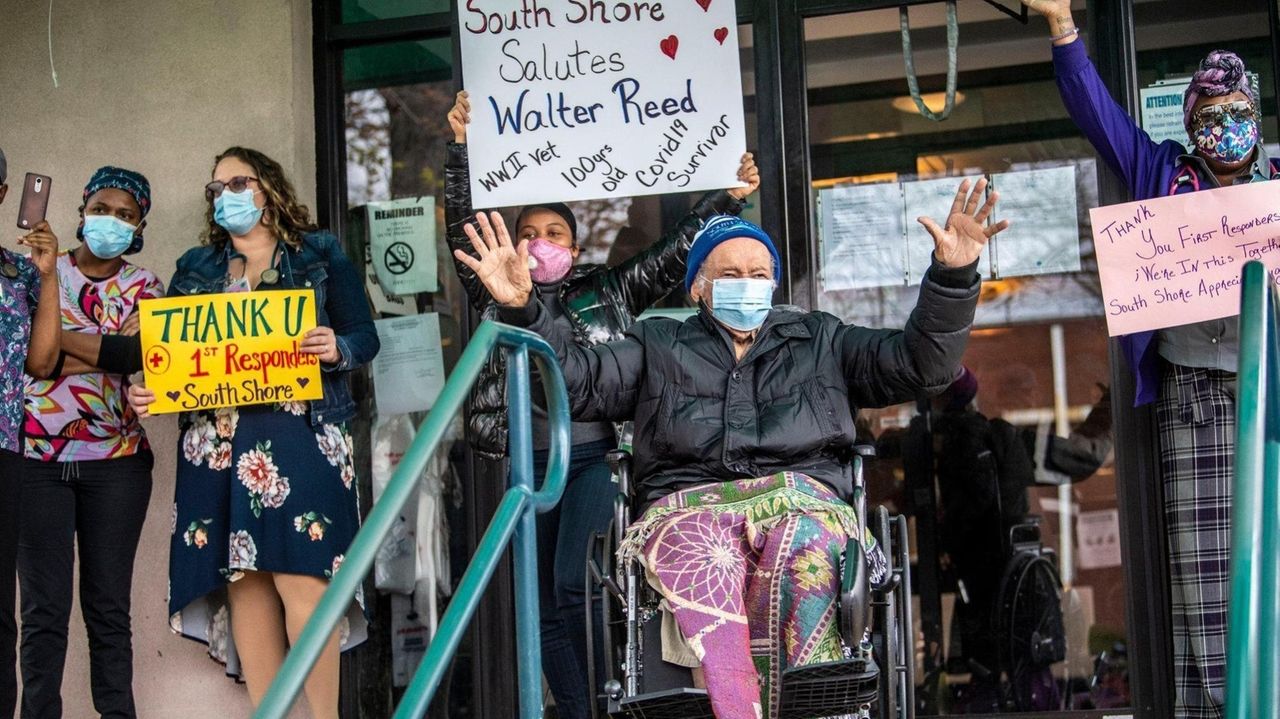 Walter Reed, a World War II veteran who turned 100 on Wednesday, was released the same day from South Shore Rehabilitation and Nursing Center in Freeport after beating COVID-19. His family and friends celebrated his birthday with a parade. Credit: Newsday / Yeong-ung Yang

Centenarian Walter Reed was celebrated Wednesday as a hero on multiple fronts: a World War II veteran and COVID-19 survivor.

A motorcade of police and fire vehicles and people cruising by in their own cars honked and cheered when the 100-year-old veteran was rolled out of the South Shore Rehabilitation Center in Freeport in a wheelchair. He waved his arms in the air while wearing a mask. Reed, who had recently survived a bout with coronavirus, told festive onlookers, “This adds 10 years to my life.”

He later held up a sign that read: “Thank you family, friends + South Shore Staff for your support.”

Reed, who lived by himself in East Rockaway, was still driving a vehicle before having hip surgery in February. The subsequent battle with the highly contagious virus that has proved deadly for the elderly put a scare into Reed’s family.

“He is doing a lot better than he was,” said Reed’s daughter, Catherine Reed-Esposito. “We thought we were going to lose him for a second.”

Village of Freeport Mayor Robert T. Kennedy attended the parade for the war hero who beat COVID-19. He estimated about 200 people showed up, and the motorcade included police cruisers and firetrucks.

Kennedy, who had never met Reed, said he considered his survival from the disease as “amazing” because of his age.

“He must have that personality to not give up and continue to fight,” Kennedy said. “I’m sure all the prayers that people have said for him the last few months have helped.”

He said Wednesday’s parade was no different.

“It’s a change from the isolation that everybody’s been involved with for over six weeks now.”

When an SUV drove by honking its horn, a passenger in a back seat held up a sign that read: “We love you Mr. Walter!”

The act of appreciation by community members invigorated Reed. He said it’s that kind of spirit by which he has lived his life.

When asked Wednesday by a reporter what his secret to a long life was, Reed said: “Being nice and being congenial. And love your fellow man.”

The crowd erupted in cheers following Reed's words to live by.