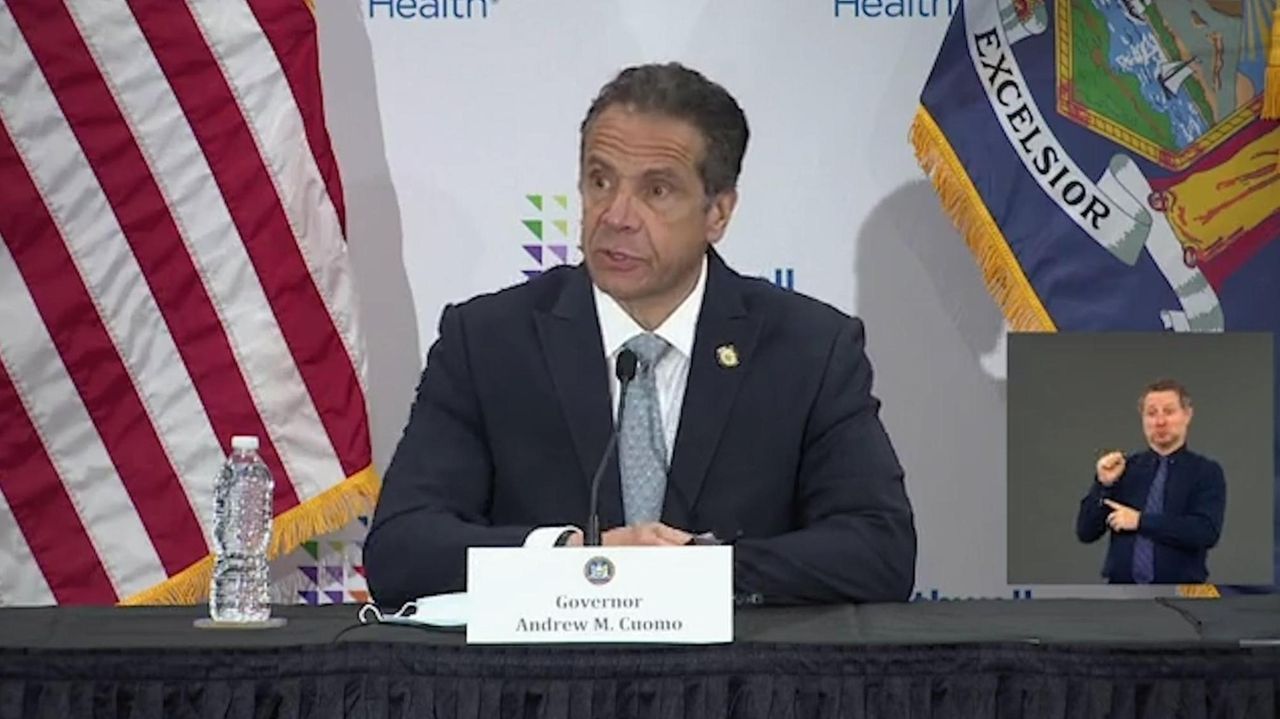 Gov. Andrew M. Cuomo talked about the latest coronavirus numbers at his news conference Tuesday and said Long Island has "made great progress." At one point, the Island was losing about 100 lives to COVID-19 per day, he said, but that number has dropped to about 13 daily. Credit: Facebook / Gov. Andrew Cuomo

Hospitals in Nassau County can resume performing elective surgeries, Gov. Andrew M. Cuomo said Tuesday, as the Long Island region makes what he suggested are great strides to beat back the coronavirus and move toward reopening.

Cuomo also said the state is launching a pilot program to let visitors back in specific hospitals around New York State, including at two on Long Island, in Huntington and Plainview.

“Long Island is making great progress,” said Cuomo, speaking at Northwell Health's Feinstein Institutes for Medical Research in Manhasset during his daily briefing. He noted that the death toll from COVID-19 on Long Island has dropped from a peak of about 100 to about 13 people lost on a daily basis.

“... We saved lives and if we didn’t do what we did, that number of 100 per day would have kept going up. That's why we did what we did. Did it work? You are darn right it worked. We saved many lives.”

Memorial Day events will have to be curtailed to prevent crowds, Cuomo said.

Another casualty: the 54th annual Puerto Rican Day/Hispanic Day Parade in Brentwood, one of the largest events of the year in the region. Organizers said the parade that was scheduled for a Sunday, on June 7, is canceled.

Cuomo's announcement means that, going forward, medical providers in Nassau will be allowed to restart elective surgeries and return to the ambulatory care of patients other than those with COVID-19 as Long Island gradually emerges from the worst days of the coronavirus crisis.

Medical providers in Suffolk County had been authorized earlier this month to perform such elective procedures.

Allowing Nassau hospitals and ambulatory centers to begin elective procedures is important because patients have missed routine screenings that help catch diseases before they get worse, said Dr. Joseph Greco, chief of hospital operations at NYU Winthrop in Mineola.

Greco said NYU Winthrop has postponed about 2,300 procedures because of the pandemic. The procedures include endoscopies and colonoscopies, he said.

"It will take some time to catch up," Greco said, adding that some patients are nervous to go to the hospital. "We need patients to realize this is a safe place to visit."

Greco said NYU Winthrop had been performing about 100 surgeries daily before the pandemic.

"If we get to 75% of that, we will be happy," he said. "We must allow for social distancing. We need to avoid crowded waiting rooms."

Richard Murphy, president and CEO of Mount Sinai South Nassau, said the hospital has “the plans in motion” to begin elective surgeries in the next few days.

“Our surgeons have been anxious to get started,” he said. “They have a waiting list of patients backlogged.”

Murphy said “it’s going to take some time” to catch up. Nearly 1,200 surgeries were deferred, he said. The hospital may add weekend and nighttime slots for surgeries and, if necessary, contract nurses and other staff from agencies.

Dr. Rajiv Datta, chairman of surgery for South Nassau, said, “We are ready to go. We have all the policies and procedures in place.”

Datta said the hospital is safe for elective surgeries. Patients who test negative for the coronavirus — all patients are tested before admission — are separated from COVID-19 patients, he said.

“We have a safe pathway for patients, for non-COVID patients, in the hospital,” he said.

Cuomo said the state's Capital Region that includes the city of Albany is set to enter the first phase of reopening as it trains the contact tracers needed to track down people exposed to the virus. That means seven of 10 regions in the state are restarting economic activity after the coronavirus shutdown of all nonessential businesses.

The latest development leaves only Long Island, New York City and the Mid-Hudson Valley as remaining parts of the state under the full effect of business closures.

Nassau Executive Laura Curran expressed frustration with some of the metrics the state is using to determine when a region can reopen. She called the benchmark of 14 days of declining deaths a “lagging indicator, it’s a snapshot of where we were a few weeks ago.”

In another gradual step, Cuomo announced the launch of the hospital visitation pilot program to permit visitors to see patients, under specified time limits at participating hospitals. Visitors must wear personal protective equipment and will be subject to symptom and temperature checks.

The two Long Island hospitals, Plainview and Huntington, both are part of the Northwell Health network. Nine hospitals in New York City and five hospitals in other state regions will participate.

“This is getting visitors back into hospitals with the right precaution, with the right equipment, but it is terrible to have someone in the hospital and then that person is isolated, not being able to see their family and friends," Cuomo noted.

The state continued to see declines in hospitalizations and intubations of patients, according to the latest state figures, tallying the last full day of cases for Monday. However, 105 New Yorkers died Monday, a much lower number than during the outbreak's peak of nearly 800 in the state but reflecting a slow decline day over day.

The state has recorded a total of 22,843 deaths from the virus.

The state reported 335 people were newly hospitalized Monday, a marked drop from a peak of more than 3,000 new patients a day in early April. There were 1,474 new positives across the state Monday for an updated total of 352,845 confirmed cases.

Suffolk Executive Steve Bellone said the number of people hospitalized in the county decreased by eight to 497. That is the first time the number has fallen below 500 since late March, he said.

In one sign that life remains far from normal on Long Island, the New York Racing Association announced that the Belmont Stakes will be the first leg of the Triple Crown for the first time in history, on June 20. The Elmont event is usually the final one of the three-race series, but the Kentucky Derby in Louisville, was moved from May 2 to Sept. 5, and the Preakness Stakes in Baltimore was moved from May 16 to Oct. 3.

And there will be no fans present at Belmont. The race will be broadcast on NBC.

"So you're going to have to make your own mint juleps and put on your own fancy hat and blazer and hunker down on your couch to watch the Belmont Stakes," Curran said.

The new reality of the coronavirus age also will be evident with the first major secular holiday to take place since the pandemic hit New York in March — the traditional Memorial Day, and the weekend parades marking it.

Cuomo said that, in effect, there will be nothing traditional about it. Parade gatherings will be limited to 10 people or less. And he encouraged vehicle parades so crowds do not gather on the streets.

He added: “We hope that those ceremonies are broadcast, televised, in their areas so that people can be part of honoring that tradition.”

Cuomo also said local governments can decide not to have any parades if they wish, to avoid the potential of gatherings of more than 10 people.

Bellone said county volunteers will be planting flags at the graves of veterans on Saturday, but the plan currently is to plant the flags at non-VA cemeteries, since the federal government has prohibited the large-scale flag placement at VA cemeteries.

Bellone said he has requested that the Department of Veterans Affairs reverse its decision.

He said the volunteers need 7,000 flags for the graves but have only about 1,000. He asked residents to donate flags, either 8-by-12 inches or 12-by-18 inches. The flags can be dropped off at the H. Lee Dennison Building in Hauppauge before 5 p.m. Thursday, he said.

If people cannot deliver them, they can call 311 and the county will try to pick them up, he said.

“Memorial Day is meant to honor the sacrifices and service of the men and women who served this country, who died for us so we can have the liberties we enjoy,” he said.

In Brentwood, organizers of the canceled Puerto Rican/Hispanic parade were working to devise events to replace their marquee event, which typically attracts tens of thousands of people.

Margarita Espada, lead organizer of the parade and head of Teatro Yerbabruja cultural center in Bay Shore, said remote events will fill in for the parade, as well as the third annual Downtown Central Islip Arts Festival, which had been planned for September.

"The cancellation of the parade makes me very sad, but as a resident of this community, I understand that public health must be a priority," said Espada, a playwright and native of Puerto Rico. "I hope that our community continues to protect themselves against the virus and to use our culture and art as part of the healing process."

The first substitute event will be on air, instead of in the streets, broadcasting on La Fiesta Radio from noon to 3 p.m. on the same day and time the parade would have taken place. It will explore the Latinx experience on Long Island as seen through the Parade’s 54-year history until today, she said.

The second event is planned for September and will provide “a grand panorama of Latin American visual and performing arts,” Espada said. "We hope to meet everyone in our virtual space to raise our spirits celebrating the cultural legacy of our Latin American people in Long Island."

Teatro Yerbabruja, which has organized the parade and festival for the past several years, is a nonprofit arts organization that fosters socio-economic development in communities including Central Islip, Brentwood and Bay Shore/North Bay Shore. Those areas have been afflicted with some of the highest coronavirus rates on Long Island.

Cuomo repeated his pitch first made Monday for professional sports teams in New York to get back into action — even though they would have to return to largely empty stadiums and arenas.

“I'm very aggressive on encouraging sports teams to start and to operate without fans,” he said. “When a team plays, even if there's no one in the stands, it gets broadcast and that gives people at home entertainment value, something to participate in. Another reason, frankly, to stay home as opposed to go out, and staying home is good right now.”

State figures released Tuesday showed new cases of COVID-19 continued to decline, heading toward what officials hope is a more manageable level that might some day allow those crowds back at Yankee Stadium or Citifield.

Northwell Health said Tuesday it had 886 COVID-19 patients at its hospitals, a 17% drop from a week ago.

Northwell has reported a decrease in the number of COVID-19 patients every day this month except on Monday, when the number at its facilities rose by four.