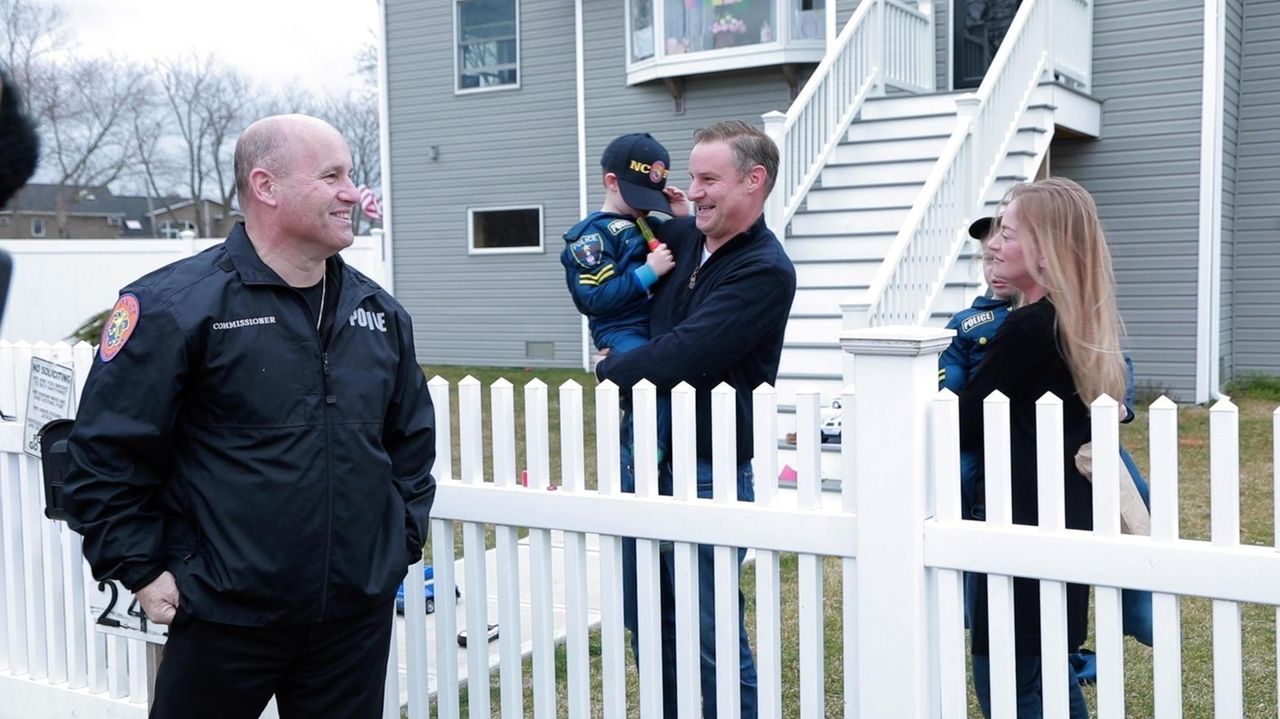 Eugene Klochkoff, of Seaford, received a fifth birthday surprise on Wednesday when the Nassau County Police Department appeared in front of his house to serenade the boy with "Happy Birthday" and gave him some presents from the department — all from a social distance. Credit: Newsday / Yeong-Ung Yang

A Seaford boy who turned 5 years old Wednesday was disappointed when his birthday party was canceled because of the coronavirus. But in a turn of events his parents say he'll never forget, the boy got a visit in grand style from the Nassau County Police Department on his big day.

Eugene Klochkoff was serenaded — from a distance — by a uniformed police officer playing the trumpet to the tune of "Happy Birthday" as Nassau Police Commissioner Patrick Ryder and a handful of other officers sang to the boy. Ryder and the officers arrived outside Eugene's home in a caravan of police vehicles, a siren blaring and lights flashing.

"Oh my goodness; we didn't expect this," said Eugene's father, also named Eugene Klochkoff, as he stood in his yard. "Canceling a 5-year-old's birthday party, not able to play with his friends, stuck in the house — so from that, to, how do you forget this?"

Eugene has severe asthma and has been quarantined inside his home for the past two weeks in an effort to prevent him from contracting the virus.

On Wednesday morning, Eugene wore a huge grin on his face as the officers stood feet away — a sign of the times in the new coronavirus era where social distancing is the norm. But the boy was not very talkative during the police visit, mostly staying in his father’s arms. Eugene’s parents said he’s shy.

His mother, Rebekah Klochkoff, messaged the department's Facebook page on Tuesday, inquiring if a police officer could drive by their home, wave to their son and say happy birthday. She was surprised, she said, when she heard back not long after from Det. Lt. Richard LeBrun, the department's top spokesman.

"I was so shocked to get a reply and call from LeBrun saying they would love to help Eugene celebrate his birthday," she said.

Both Eugene and his younger brother, Alex, 3, dressed in their police officer uniform costumes, which the boys wore last year on Halloween. They've since taken to wearing them on a weekly basis, their parents said. When Eugene grows up, he wants to be a police officer, his father said.

"It's about reaching out during tough times to put a smile on a kid's face," Ryder said. "That's what we're here for."

Eugene's mother said she was touched by the gesture. "I truly don't have enough words to express my gratitude to Commissioner Ryder for making this happen," she said. "It is very difficult times for everybody. I can only imagine how much he has on his plate right now."

Ryder, who appeared to be enjoying the brief distraction, passed out Nassau Police-branded balls on Eugene's street to some other children, who watched the spectacle from their lawns.

"We'll be back when he turns 6, but by next year the virus will be over so we expect coffee and cake when we come," Ryder quipped.

Eugene's dad replied: "We'll have a real party then."

Homebound patients face obstacles getting vaccinated
1:26 State sees decreasing virus positivity, but LI yields higher rate
4:01 COVID-19: From 799 deaths in one day to vaccine being 'passport' back to normalcy
Dem split on jobless benefits slows relief bill in Senate
2:15 Johnson & Johnson vaccine has arrived on Long Island
What you need to know about COVID-19 vaccine development
Didn’t find what you were looking for?