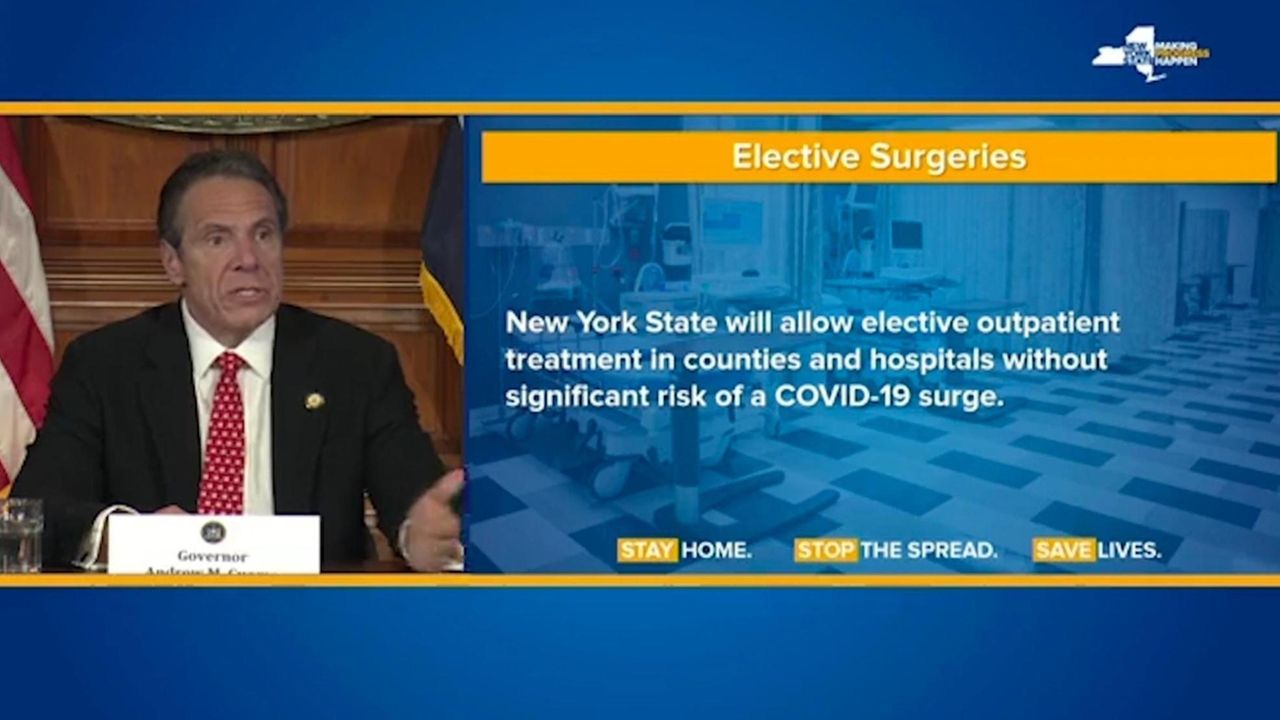 Gov. Andrew M. Cuomo, who will make the ultimate decision on reopening plans, has not eased restrictions yet for Long Island or other downstate areas — though on Wednesday he did say hospitals in 35 upstate counties could resume elective surgeries postponed because of the pandemic.

Nassau County Executive Laura Curran said she believes the county will meet Phase One requirements toward a reopening, as described by the White House and the U.S. Centers for Disease Control and Prevention: declining hospitalizations, declining number of new positive cases, and ramped-up testing.

Hospitalizations were down 91 patients from Tuesday, she said, bringing the county's total to 1,368. There’s been a 33% drop in intensive care unit patients and a decline for those on ventilators as well. Curran said fewer than 15% of tests on Tuesday were positive — a drop of 50% from three weeks ago.

It marked the 14th straight day of declines, she said.

The last uptick in hospitalizations was April 20, and the numbers have declined continuously since. “We are on that path to reaching the 14th-day mark in the week,” he said.

Hospital capacity is nearing less than 70%, "right around the numbers the state says you need to be at to reopen in a safe way,” Bellone said.

When stay-at-home orders are lifted, people still must follow guidelines to avoid another surge, he said. “At the end of the day, it will be up to us whether we can successfully reopen the economy," Bellone.

The latest daily coronavirus death toll in New York was 377, according to updated numbers from the State Department of Health. It was the fourth straight day the tally fell below 400, though the figure was higher than the previous three days. New York hit a daily peak of nearly 800 deaths three weeks ago.

The state closed in on surpassing 300,000 confirmed coronavirus cases since the first official diagnosis was confirmed in early March.

Cuomo sounded a cautious note, indicating the reopening has to be carefully calibrated.

He said the state could learn from countries like Singapore and Germany that appeared to have gained control over "the beast" of COVID-19, only to see a resurgence.

Cuomo ordered the Metropolitan Transportation Authority to clean up “filthy” and “disgusting” subway trains that essential workers depend on to get to work amid the COVID-19 crisis, and said the agency needs to remove growing numbers of homeless people who are lingering or sleeping in the cars.

“I want a full plan, how do we disinfect every train, every night? Period,” he said. "We let homeless people stay on the trains in the middle of a global health pandemic with no masks, no protective equipment — you’re not helping the homeless. Letting them endanger their own lives and endanger the lives of others is not helping anyone.” 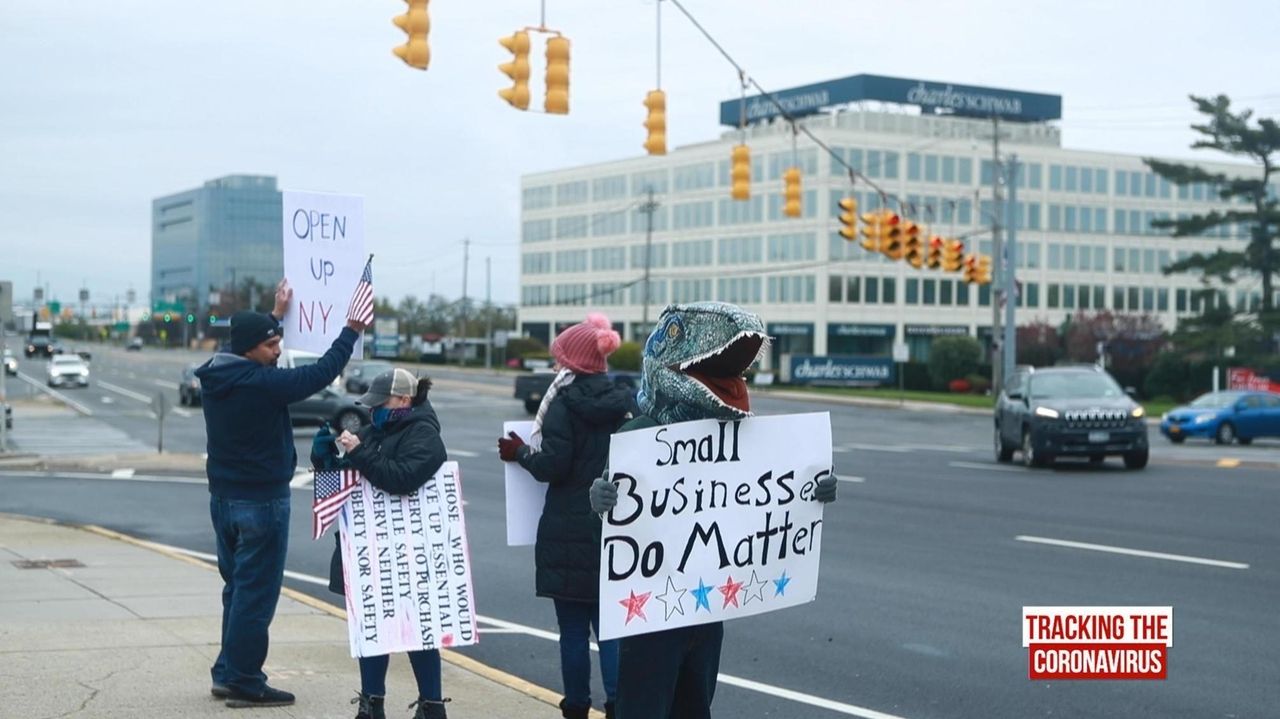 Of the essential workers, he added: “We owe it to them to be able to say, the train you ride, the bus you ride, has been disinfected and is clean.”

The MTA, largely under state control, said it would move fast on Cuomo's order.

“We fully agree that we must do everything we can to keep our system and trains and buses as clean and as safe as possible," said Ken Lovett, senior adviser to MTA chairman Patrick Foye.

"Following on our aggressive plan of disinfecting our stations twice each day and our full fleet every 72 hours, we are completing a plan to further enhance and increase the frequency of our cleaning," he said. "We will deliver that plan to the governor as he requested.” 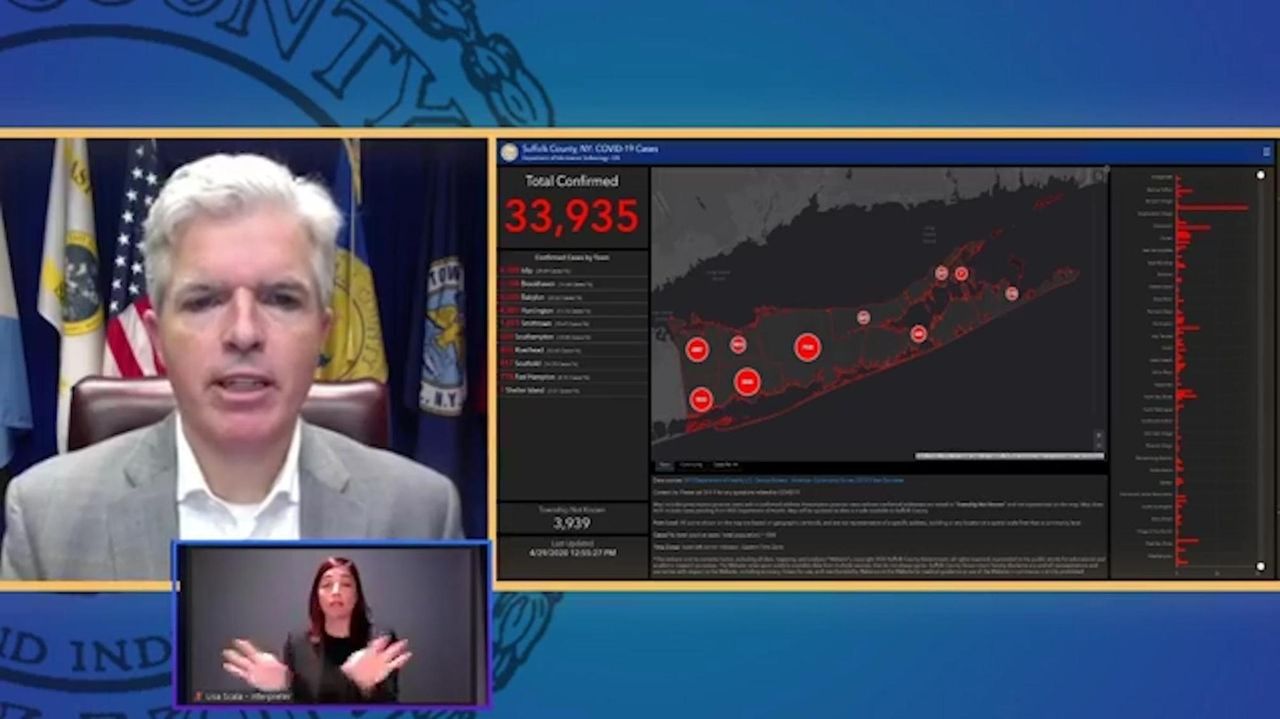 The Legal Aid Society, a nonprofit organization that provides legal services to homeless individuals, criticized the strategy by Cuomo and other officials.

“Once again, this is an unproductive approach by [New York City] Mayor [Bill] de Blasio, Governor Cuomo, and the MTA to tackle the homelessness crisis on the subway," said Joshua Goldfein, staff attorney in the group's Homeless Rights Project.

"Amid the public heath pandemic, we should be focusing on creating more housing for those who need it, not increasing NYPD policing," Goldfein added. 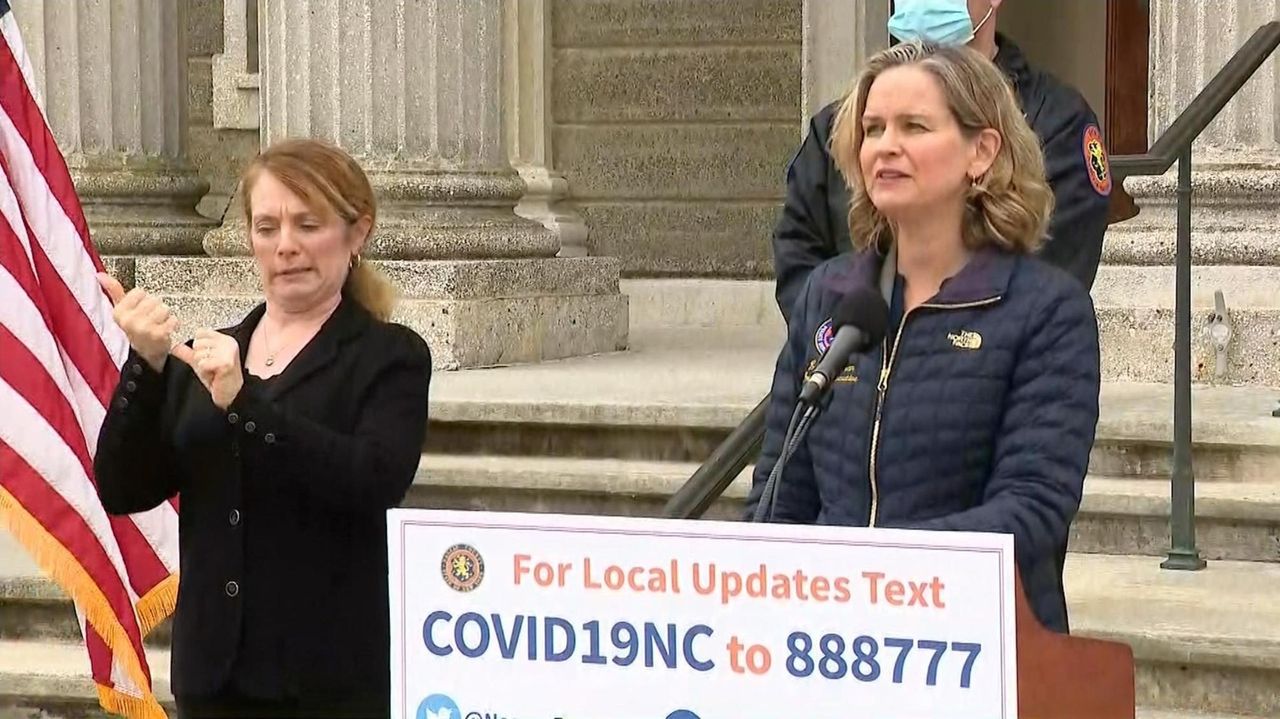 Curran: Nassau continues to 'check boxes' toward phase 1 of reopening Nassau County Executive Laura Curran on Wednesday said the COVID-19 numbers and statistics support the CDC's criteria toward moving into Phase One of the reopening. Credit: News 12 Long Island

"There were thousands of people, crammed onto one block," Shea said, adding: "It better not happen again."

De Blasio said: "People will die because of it." He added that "the next gathering will be met by summons and arrests, period."

The mayor disagreed with Twitter criticism that he singled out Jewish gatherings — critics likened the funeral gathering to people in Central Park. "This is by far the largest gathering in any community of New York City of any kind that I had heard of or seen directly or on video since the beginning of this crisis. It's just not allowable," de Blasio said.

'Self-portrait of a miracle'

The latest state report on the pandemic's progression, released Wednesday, showed a continued decline in net hospitalizations and intubations due to COVID-19. But Cuomo cautioned that too many new patients — still about 1,000 a day — are being admitted, and that many New Yorkers continue to die because of the virus.

Cuomo said preliminary results of random testing appeared to relieve fears that firefighters and police in New York City are suffering higher rates of COVID-19 infection. Their rates were actually lower than the general population downstate, he said.

The governor cast doubt that specific major events such as the annual State Fair in Syracuse or the Saratoga racetrack could take place anytime soon, since they would attract hordes of people releasing pent-up energy after weeks of stay-at-home orders.

In Nassau, Curran said massive antibody testing of first responders and department of health workers likely will begin early next week under a partnership with Northwell Health.

The tests will determine if those essential workers previously have been exposed to the virus and developed antibodies that could protect them from infection of COVID-19. Health experts have said testing for antibodies does not necessarily mean a person is immune.

The testing will be voluntary.

“We hope to get a lot of volunteers to get a sense of the herd immunity of our workforce,” Curran said. “We hope it will give us a larger understanding of community spread and herd immunity throughout the community.”

Cuomo expressed gratitude to people across the United States for supporting New York, and unveiled a display of facemasks sent with notes from sympathetic Americans nationwide.

He called the panel “a self-portrait of a miracle" and a display of American generosity. "And you know what it spells?" he said. "It spells love. … We’ve received thousands of masks, from all across America, unsolicited, in the mail, homemade, creative and personal with beautiful notes … from all across the country, literally.”

Surgeries back at Syosset Hospital

On Long Island, Northwell Health on Wednesday said the number of COVID-19 patients has fallen enough that it has resumed performing some surgeries that were delayed because of the pandemic.

While the network — which operates 11 hospitals on Long Island — is waiting for state clearance to restart elective surgeries, it has started performing surgeries that cannot be delayed without putting a patient’s outcome at risk.

Northwell said it has cleared Syosset Hospital of coronavirus patients and on Wednesday began performing oncology procedures there, including breast and OB-GYN surgeries.

The pandemic continued to inflict a toll on the region's economy. Four Long Island school bus companies that are part of a family-owned conglomerate said they are shutting down, and their contracts will be picked up by other firms.

Newsday reported last month that the Baumann group was laying off about 900 drivers and other employees in the wake of school closings.

“The company had anticipated that all those layoffs would be temporary and that laid-off employees would be recalled to complete our transportation contracts,” Baumann stated. “However, recent developments require us to shut all operations and issue this notice of permanent closure of all company operations.”

Meanwhile, a state task force will be named in coming weeks to help New York with efforts to reopen schools, education leaders said.

“Despite the challenges we are all facing every day, it is time we begin to look at how we can successfully and appropriately reopen our schools,” Betty A. Rosa, chancellor of the state Board of Regents, and Shannon Tahoe, interim education commissioner, said in a statement.

The group will include superintendents, principals, teachers, parents and others.

Cuomo has said he will decide this week whether to keep schools closed for the remainder of this school year. The state also faces major questions regarding summer classes and sessions next fall. The governor recently named his own 100-member group to advise on reopening of the economy statewide.

Some activists had questioned the absence of teachers and school administrators on Cuomo’s panel.

“Thankfully, Betty Rosa and the Regents have stepped up to ensure that the K-12 stakeholders will have a voice,” said activist Jeanette Deutermann of Bellmore.

Though elective surgeries were canceled statewide, childbirths have continued, with expectant mothers and their partners or family members traveling to hospitals often overrun with COVID-19 patients.

On Wednesday, the state’s COVID-19 Maternity Task Force issued initial recommendations that would increase and diversify birthing site options, mandate the testing of all pregnant New Yorkers and extend the time a support person can accompany the mother post-delivery.

“The policies being advanced [Wednesday] will be implemented immediately to address the very valid fears and concerns that so many women are now facing, and to address issues that impact pregnancy and infants,” said Melissa DeRosa, secretary to Cuomo and chairwoman of the New York State Council on Women and Girls.

Coronavirus gets to Saltaire

In the small Fire Island Village of Saltaire, officials said Wednesday they have the first confirmed coronavirus case.

The person who tested positive is a contractor who works in some of the homes in Saltaire, but is not a resident of the village, Mayor John A. Zaccaro Jr. said.

“We believe the individual was not in occupied houses. That helps,” he said. “I think he is past the contagious stage.”

Zaccaro said the unidentified worker, who had “minimal” contact with residents, is one of the many landscapers, electricians, plumbers and trash collectors who regularly work in the village, which has about 430 homes. He said about 70 people are in the village now, adding he expects that number to start swelling this weekend.

Homeowners who may have had contact with the worker have been notified by Saltaire officials, Zaccaro said, adding that the person was last in the village about 10 days ago.