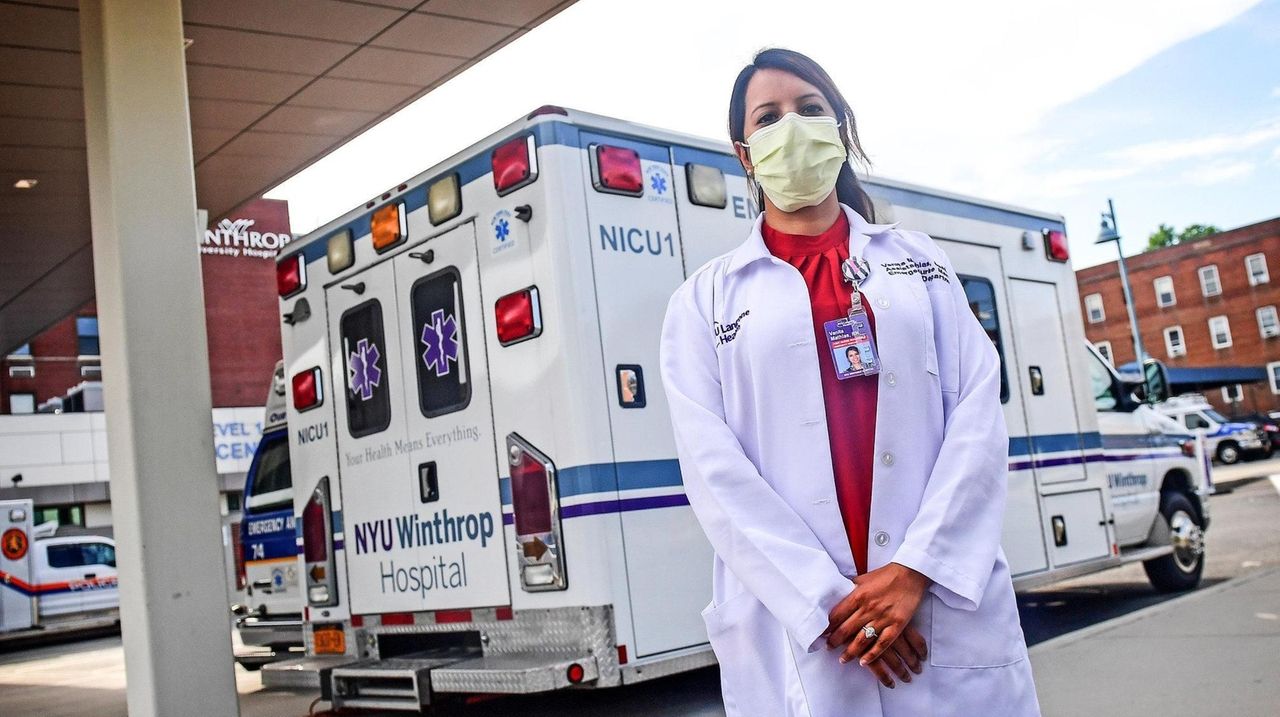 Even though COVID-19 deaths have decreased dramatically since March and April, doctors and nurses still remember what it was like to come to work during those days. Credit: Newsday / Thomas A. Ferrara

Three months after COVID-19 killed more than 2,700 people on Long Island, the number of patients who died from the virus in July had dropped to 26, according to county figures compiled by Newsday, while some hospitals said they averaged less than one death per week in July.

The decrease in deaths is coupled with hospitalizations continuing to plummet. The percentage of COVID-19 tests that were positive has mostly remained at around 1%.

“I pray to God every day that we stay in the situation we are in right now, and that people remain smart and are careful,” said Dr. Aaron E. Glatt, chair of the department of medicine at Mount Sinai South Nassau in Oceanside. “We control whether we go backwards or not.”

The state also reported new lows of deaths in the single digits this week.

The encouraging news in the region and the state is counter to COVID-19 statistics in other areas of the United States. Florida reported nearly 5,000 new cases on Monday, the lowest its been in that state since June. In Arizona, hospitalizations have stabilized, as have new cases, although nearly 1,500 new cases were reported on Aug. 1.

In New York, Glatt said fewer cases, high-risk people practicing social distancing and more information on how to care for COVID-19 patients have added up to a large reduction in deaths.

Still, medical professionals said the anticipated reopening of schools and an increase in travel could lead to a reversal of fortune here.

A downward trend on LI

Long Island Jewish Medical Center in New Hyde Park, one of Northwell’s flagship hospitals, had less than 10 deaths in July too. LIJ is technically in Queens, and therefore its statistics are filed through New York City. There, the numbers have drastically fallen, said Dr. Fred Davis, associate chair of the emergency department at LIJ.

“It’s amazing how far we’ve come,” Davis said. “We had 150 patients intubated at one point. We easily had at least as many deaths in one day in April as all of July. We spend a lot of time reflecting on where we were.”

Davis said he won’t soon forget the patients that came in, including a 32-year-old woman with asthma, “who we had to intubate for five or six days. We slowly brought her back to where she needed to be, but it was really alarming to see someone that age be intubated.”

NYU Winthrop in Mineola had three deaths related to COVID-19 in July, compared to more than 200 in April.

'We cried every day'

Vanita Mathias, an assistant nurse manager in the emergency department at NYU Winthrop, said her eight years of experience as an ER nurse didn’t prepare her for what happened in April.

“The horrors we saw, we couldn’t have prepared for,” she said. “We cried every day. We watched people get very sick, or die, and they couldn’t have family around them. We didn’t know what to do or how to help.”

She said July has been a return to normalcy, as fewer people have feared coming to the ER for other issues. “We deal with a lot of trauma from the area,” Mathias said. “It’s more like it was before COVID, but we realize it could come back. If it does, we understand how to treat patients. We have a better handle on the virus than we did the first time.”

One example: She said plasma donations from coronavirus survivors have made a big difference in delivering effective care.

Catholic Health Services of Long Island reported nine virus-related deaths in July, down from 653 at its six hospitals in April.

The Rockville Centre-based health system’s COVID-19 caseload has fallen from more than 800 at the pandemic’s height in April, to about 30 at the end of July, said Dr. Patrick O'Shaughnessy, executive vice president and chief clinical officer at Catholic Health.

“April showed us the frailty of life,” he said. “We knew the wave was coming, we stayed ahead of the wave, but the number of lives lost and the families impacted, was horrific.”

O'Shaughnessy said that while today’s numbers are encouraging, “and it’s important to get back to living life, it will all be different."

The new normal, he said, is going to include masks, hand sanitizers and screening for the disease.

NY health officials: Students can be 3 feet apart in classrooms
1:54
Online instruction has been liberating, and vexing, for students with disabilities
1:31
A psychotherapist who walks and talks with clients reflects on strength
1:16
Islamic leaders: COVID-19 vaccine OK during Ramadan
2:27
Ambulance dedicated to EMT who fell to COVID-19
LI's COVID-19 positivity rate edges downward, with vaccine hurdle ahead
Didn’t find what you were looking for?