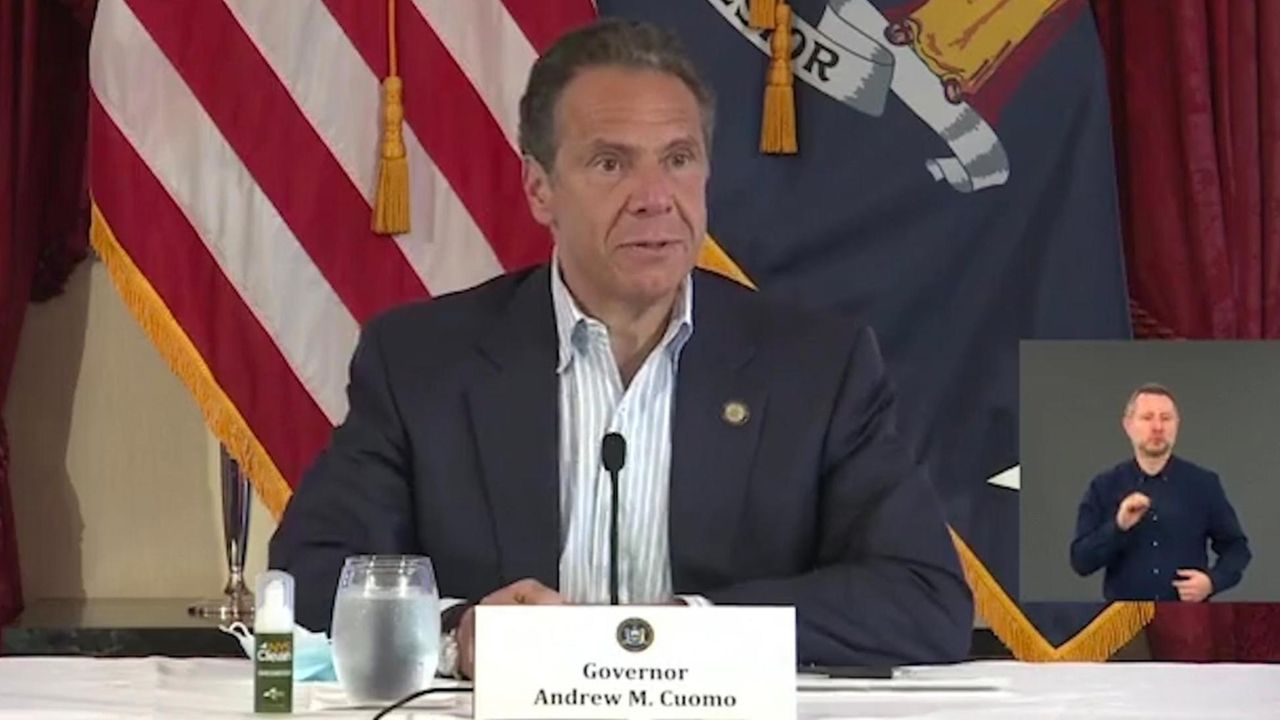 Gov. Andrew M. Cuomo on Saturday said that the number of daily COVID-19 deaths has fallen under 100 for the first time since early in the crisis, and that Long Island could reopen parts of its economy by Wednesday. Credit: New York Governor's Facebook

This story was reported by John Asbury, Matthew Chayes, Matt Clark, Jean-Paul Salamanca and Craig Schneider. It was written by Schneider.

Gov. Andrew M. Cuomo on Saturday said the number of daily COVID-19 deaths has fallen under 100 for the first time since early in the crisis, and that Long Island could reopen parts of its economy by Wednesday.

The number of lives lost Friday was at 84, on what he called the 84th day of the coronavirus crisis in New York State.

“I was always looking to get under 100 … it’s just a sign that we're making real progress, and I feel good about that,” the governor said during his daily briefing, held Saturday at the Executive Mansion in Albany. The peak of daily deaths was nearly 800 reported in early April.

Of Long Island, he said, “at this rate we could open by Wednesday if the number of deaths continues to decline and we get that [contact] tracing up. That is also very good news."

Long Island needs 1,800 tracers between Nassau and Suffolk County, which officials said they expect to have in the coming week.

Cuomo said that statewide, the number of hospitalizations, intubations and new COVID-19 cases all have continued to fall.

He also praised social distancing efforts of those who went to Jones Beach on Friday as Memorial Day weekend kicked off. “People were great. They’re doing what they're supposed to do, and I thank them very much,” he said Saturday.

Nassau and Suffolk are limiting county beaches to residents, but state beaches, including Jones Beach, Robert Moses, Sunken Meadow and Hither Hills, are open — albeit capped at 50% capacity in the parking lots.

Capacity wasn't an issue at the Island's state beaches and parks on a rainy Saturday: None were listed on the state parks website as having reached limits.

Of the 84 New Yorkers who died Friday, 62 were in hospitals and 22 in nursing homes, the governor’s office said. The state had reported 109 deaths on Thursday, part of a steadily descending trend line.

'Masks can save your life'

Even as New York's numbers declined, Cuomo continued to urge people to get tested and to wear masks. He noted that New York has 760 testing sites across the state.

Cuomo noted that one-third of infected people don't show symptoms of the virus but can still spread the disease.

Long Island completed a record 8,193 tests Friday, according to state data released Saturday: 4,188 in Suffolk and 4,005 in Nassau. The prior record of 7,487 test results had been set April 8.

Cuomo said that while the state has allowed gatherings of up to 10 people, it should be done with care, with people wearing masks and keeping a safe distance from others.

In the Long Island Region, the state will allow construction companies to immediately begin setting up work sites and equipment to prepare for relaunching their activities in the coming week under the first phase of reopening, the governor said Friday. The order also applies to the Mid-Hudson Region north of New York City.

The Long Island Region is meeting five out of seven metrics to begin reopening, with contact tracing and a sustained declining number of deaths not yet met, according to the state's regional monitoring dashboard. Nassau County Executive Laura Curran has said in recent days that she expects the region to meet the metric on deaths soon.

Nassau is on track to reopen in the coming week if the region meets its need for contact tracers, Curran said.

“We’re aggressively getting going to have our army of tracers ready,” Curran said.

In Suffolk, County Executive Steve Bellone said the county is training hundreds of employees for contact tracing and is expecting to have 1,000 employees trained by Wednesday.

“We will get everyone trained and we will be ready. ... Tracing will not prevent us from reopening. We are ready to move into Phase 1 and we will do the contact tracing that is a key piece of reopening safely,” Bellone said.

Nassau County reported 118 new cases of the virus Saturday, for a total of 39,726 since March 5. The county also recorded its lowest percentage of positive tests since it started testing. Only 2.8% of 4,000 tests were positive for COVID-19. Curran said anyone can get tested with or without symptoms by calling 516-396-7500.

Nassau County also had five new deaths for a total of 2,087.

In Suffolk County, an additional 130 people tested positive for COVID-19 in the last 24 hours, bringing the county’s total cases to 38,802, according to the numbers Bellone cited.

Suffolk has seen its hospitalization numbers go down by 16, to 409, in the last 24 hours. The number of patients in intensive care unit beds has dropped by six, to 125. In addition, 43 COVID-19 patients were discharged from Suffolk County hospitals.

Eight more people have died from the virus during the last 24 hours in Suffolk, bringing the county’s death toll to 1,822.

As of Saturday afternoon, New York City recorded 194,667 cumulative cases of coronavirus confirmed by laboratory test, according to the municipal Department of Health and Mental Hygiene. Of those, 16,403 had died of the virus, with an additional 4,735 deaths categorized as probable from the virus.

Phase 1 of reopening Long Island would allow all construction, curbside retail, manufacturing, wholesale trade and agricultural fishing. If numbers continue to decline, in two weeks the region could move to Phase 2 for all retail, professional and administrative services and real estate.

Curran said people with vulnerable conditions and the elderly may take longer to emerge as the county starts to open up.

“I understand people are nervous," Curran said. "If we open up, it’s not like everyone will start shopping again. I think this is going to be a slow process. … For those who are nervous, it’s going to take more time. When they see life is starting to resume and terrible things are not happening, then they may feel more comfortable and venture out.”

Curran said the reopening of beaches to Nassau County residents Saturday was muted by the rain, which helped keep crowds away. The county will continue to check IDs at Nickerson Beach as long as New York City beaches remain closed.

Later Saturday, the Nassau County Department of Health issued an advisory against bathing at 18 beaches, a precautionary measure for those known to be impacted by stormwater runoff caused by heavy rainfall. Most of those beaches are on the North Shore.

Curran said that while waiting for state guidance on summer camps, she is asking the state to open additional outdoor gardens like Old Westbury and the Planting Fields Arboretum, as well as touchless museums with limited capacity.

Bellone said based on what he had seen and what the public has done to flatten the curve of the pandemic, he is “very confident” that Suffolk County can start moving into Phase 1. “We can do it successfully," he said. “People are ready to hit that Phase 1, to get back and to do this safely.”

Bellone visited the beach at Smith Point County Park in Shirley earlier Saturday and said he had been talking to staff members about the opening. Due to the weather, fewer people were out there.

There also wasn't overcrowding Saturday at city parks and beaches, according to Olivia Lapeyrolerie, a spokeswoman for Mayor Bill de Blasio, who has closed city beaches to swimming and capped occupancy on outdoor gathering places like parks.

“Not necessarily a great beach day, though,” Lapeyrolerie said.