This story was reported by John Asbury, Catherine Carrera, Joan Gralla, David Olson, Jean-Paul Salamanca and Dandan Zou. It was written by Olson.

Long Islanders flocked to outdoor tables at cafes and diners Saturday, during the first weekend they can legally enjoy a meal or a drink at a restaurant since the coronavirus pandemic began spreading uncontrollably in mid-March.

“We were just talking about how nice it is to be outside and drink a beer,” said Jason Gant, a Farmingdale State College employee who joined colleagues and a student for lunch Saturday on the front patio of Croxley’s Ale House in downtown Farmingdale after a drive-by graduation ceremony. “It’s been tough. We’re all going through something a lot of people have never been through.”

Tables at restaurants must be 6 feet apart, and retail stores must cap occupancy at 50% and require face coverings for shoppers and employees.

In Farmingdale, restaurants such as the Whiskey Down Diner had a line of people waiting for outdoor tables, and some restaurants had a time limit for diners due to limited seating.

Restaurant customers wore masks while walking to their tables but took them off after being seated. In lines on the sidewalk, there were gaps between groups of people waiting, but within those groups, people congregated together, often without masks.

At the Library Café, restaurants spaced tables on the sidewalk around the building.

“The Library food is awesome, and we wanted get out of the house,” Clarke said. “It‘s not normal, but different, and good to be here again.”

Croxley’s kept its 17 tables on the back patio and sidewalk primarily for reservations, with a few open for walk-ins.

“Yesterday felt like a grand opening,” said manager David Bivona. “There has been a lot of love and appreciation. Everyone is excited and anxious to be out again.”

In downtown Huntington, Steve and Linda Pytko stopped at one of their favorite restaurants, Munday’s Café, which had placed tables on the sidewalk, after going to the outdoor Huntington farmers market.

“We saw our favorite breakfast spot was open and got right in,” Steve Pytko said. “This is kind of our tradition every couple Sundays and it gives us a little bit of normalcy. And even though we’re not completely back to normal, we see everyone came back through the storm.”

New York has reopened more gradually than most other states — New York City is still in Phase 1, with all indoor and outdoor restaurant dining and in-store retail banned — and the state has more restrictions, such as a requirement to wear face coverings in public when within 6 feet of others.

But Gov. Andrew M. Cuomo said Saturday that as broader reopenings in other states are leading to a spike in coronavirus cases, New York, once the epicenter of the pandemic in the United States, is an “anomaly,” opening up its economy while keeping virus transmission rates low.

After announcing that the 1,734 COVID-19 hospitalizations statewide and 32 deaths were the lowest numbers since near the beginning of the coronavirus crisis, Cuomo credited New Yorkers for “the most dramatic turnaround in the country.”

“The people of this state, by their actions, have saved thousands of lives,” he said in a briefing at his Manhattan office.

He said the percentage of coronavirus tests coming back positive remains roughly stable and much lower than several weeks ago. On Long Island, it has hovered around 1%, according to a chart he displayed.

Yet there are indications that some New Yorkers are tiring of social distancing and mask regulations. A few hours after his briefing, the governor tweeted video showing hundreds of revelers crowded together on the street and sidewalk outside bars and restaurants on St. Mark’s Place in Manhattan’s East Village Friday night, most without masks.

“Don’t make me come down there … ,” the governor tweeted. 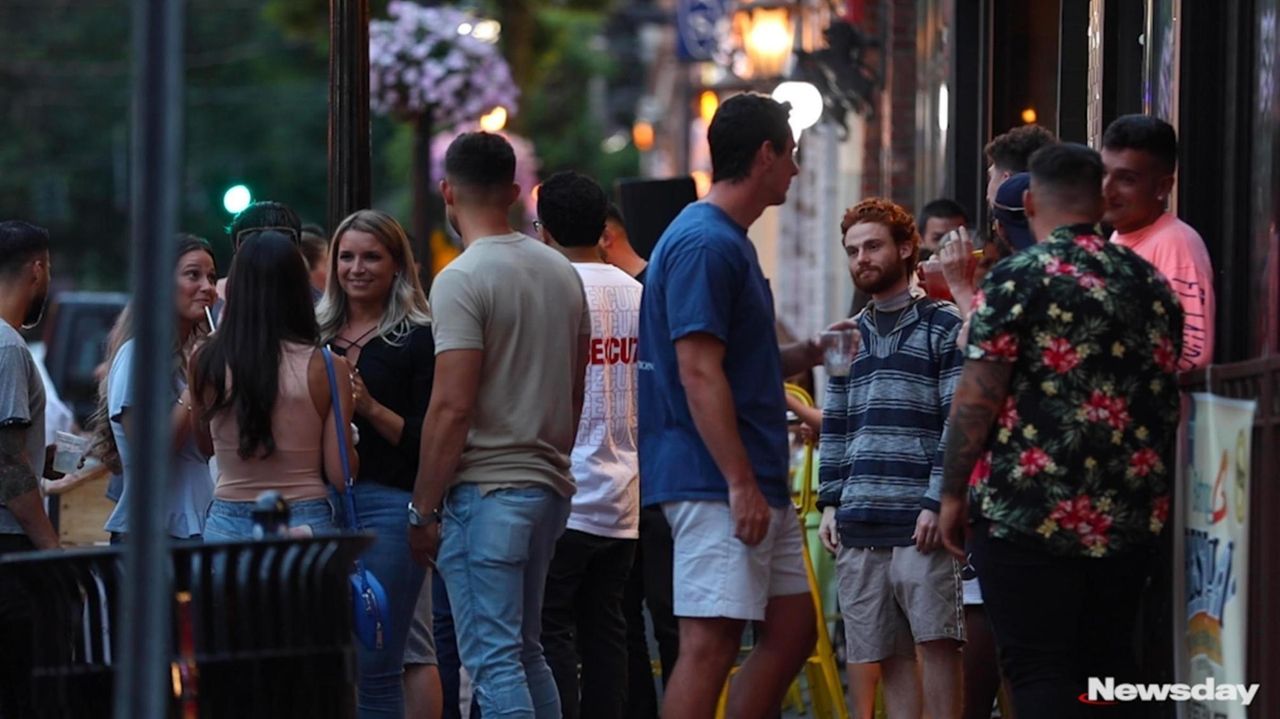 New York numbers down, but it's no time for quarantine fatigue As New York State records its lowest COVID-19 numbers, local and state officials are urging the public to remain diligent in their fight against the pandemic. Credit: Newsday staff; Kendall Rodriguez

Cuomo said “the signs across the country are frightening” as to what can happen when “you’ve lost control of the virus”: Increases in coronavirus cases of 25% or more in 14 states.

Addressing New Yorkers, he said the state is not suffering the same fate “only because of what you’re doing. That’s been the secret from Day One. You stop doing what you’re doing, you’ll see those numbers turn.”

He repeated his plea to protesters to wear masks. And he told police officers, many of whom have been seen at protests and elsewhere ignoring the state mask mandate, that they are not exempt.

A slow return for some

On Long Island, while some restaurants were at Phase 2 capacity, other businesses were struggling to attract the number of patrons they had expected.

“I don’t know if everyone knows we’re open and actually all retail is open on Long Island,” said Brian Drucker, owner of the Cow Over the Moon toys and sports gifts shop on Main Street in Huntington, which reopened on Wednesday after being closed for three months except for online orders.

Royalty Barber Shop on New York Avenue had only opened its doors in December when, less than three months later, it closed them because clients were afraid to come in, said owner Margarita Mamonova. The state-mandated closure order followed a few days later.

“It’s kind of slow. We’re a new store and people understand what the situation is,” she said. “It’s kind of tough, but open space is difficult for customers.”

At Tanger Outlets in Riverhead, parking lots were largely empty and some stores remained closed due to the pandemic.

The few people walking around mostly had masks on and were largely observing social distancing recommendations, although the lack of crowds made that easier.

Nassau County Executive Laura Curran said Saturday that no residents had died in the latest 24-hour reporting period — a day after announcing 12 deaths, which were "a stark reminder of the fact that this virus is not gone."

The total COVID-19 death toll in Nassau is now at 2,163, according to state data.

In Suffolk, Executive Steve Bellone Friday had reported the first 24-hour period in the county with no COVID-19 deaths in nearly three months. On Saturday, he said two more people had died, bringing the county’s death toll to 1,947.

State parks across Long Island were closed to new visitors and cars Saturday morning and afternoon amid COVID-19 restrictions on capacity.

Orient Beach State Park and Field 6 at Jones Beach had reached capacity by 10:15 a.m., and Bayard Cutting Arboretum was closed as of 11:45 a.m.