This story was reported by Rachelle Blidner, Matthew Chayes, Scott Eidler, Bart Jones and David Reich-Hale. It was written by Jones.

Gov. Andrew M. Cuomo threatened on Thursday to shut down bars and restaurants and revoke their liquor licenses when they violate social distancing and other regulations aimed at preventing spread of the coronavirus.

"I'm going to increase the state's enforcement capacity by executive order where violations of the rules and regulations could allow State Liquor Authority to do an immediate suspension of an alcohol license," Cuomo said.

He added that a business "that is violating the rules could have an immediate shutdown order."

Cuomo said he is weighing whether to require people traveling to New York from states such as Florida, where coronavirus cases are rising, to self-quarantine for two weeks after arrival to reduce risk as the state brings the COVID-19 virus under control.

The move on bars and restaurants came after reports of large crowds gathering inside and outside businesses in New York City and other places, including the Hamptons. Cuomo said earlier this week the state has received about 25,000 complaints.

A provision of the executive edicts also will make bars and restaurants responsible for the sidewalks and areas in front of their businesses, Cuomo said.

The state's rules include wearing masks, limiting the number of people in enclosed spaces, and gradually returning to economic and social activity.

Asked about Cuomo’s orders, Suffolk County Executive Steve Bellone said: “My view is that we just reopened in Phase 2. There’s a lot of cooped-up people, a lot of energy that was stored up that people wanted to get out. By and large, we had compliance here and it’s important we continue to communicate to businesses what the rules are.”

Bellone said Suffolk officials have chosen to primarily enforce orders by educating businesses with complaints, except when they are “egregious violations.”

“We don’t want to be overly aggressive with businesses struggling to get back on their feet, but where you have examples of egregious violations, it’s important to have a mechanism in place to respond appropriately,” Bellone said of the executive order, saying it gives the state “greater flexibility to do that.”

New York continued to record low levels of new infections in most regions even as testing for the coronavirus was ramped up to more than 68,000 samples in one day, the highest number per capita of any state or country, Cuomo said. 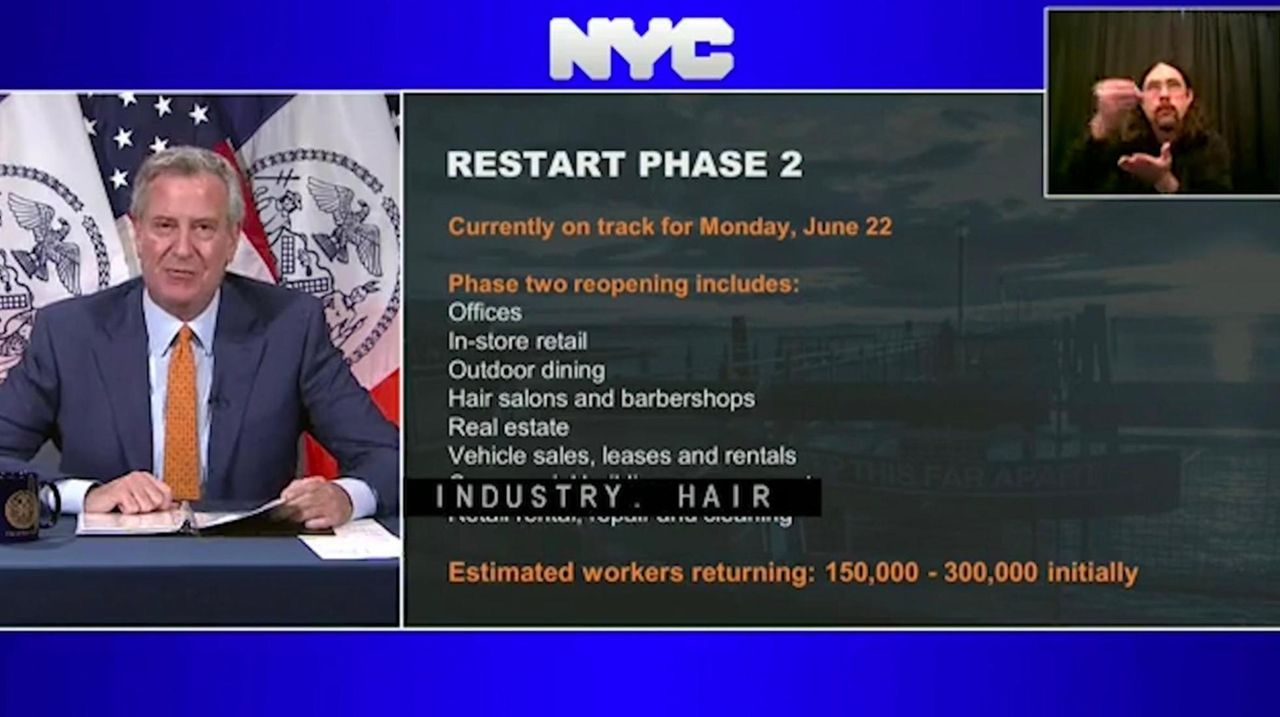 NYC ready for Phase 2 on Monday Mayor Bill de Blasio said Thursday that New York City will start Phase 2 of its reopening Monday. De Blasio estimated a minimum of 150,000, and as many as 300,000, workers could return to the city.  Credit: NY Mayor's Office

Only 0.9% of those people tested Wednesday came positive for COVID-19 in New York, with Long Island measuring even lower at 0.7% positive tests. New York City's positives decreased from 1.2% to 1% positives between Tuesday and Wednesday.

Recent test data helped the state identify a cluster of new virus cases in Central New York, which were traced to an apple manufacturing plant in Oswego where 34 people tested positive, he said. "That’s the way this is supposed to work. You see an increase in the numbers, you trace the increase."

Cuomo said he will announce Friday whether New York City will move to Phase 2 of reopening on Monday, bringing back a variety of businesses, including in-store retail, offices, outdoor dining, and hair salons and barbershops. "I’m saying businesses should plan on reopening," he said. 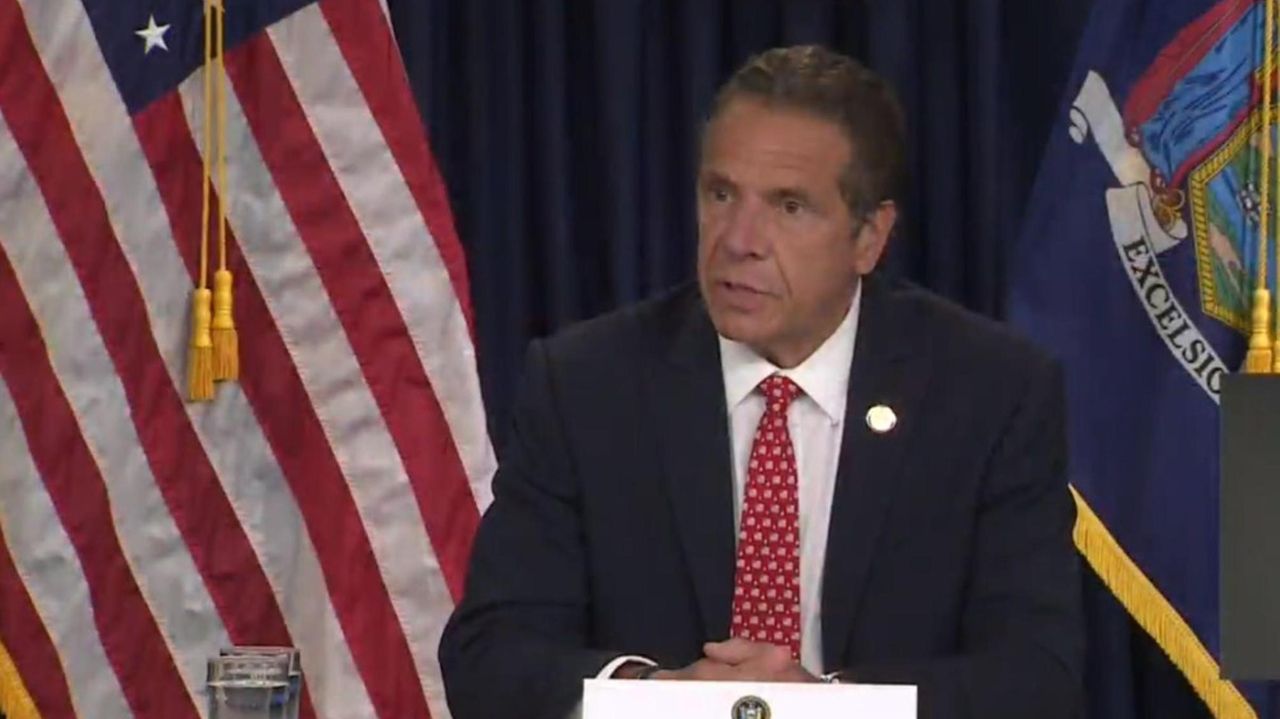 “Viral testing is robust and continues to be robust,” Curran said.

She announced the opening of a new testing center — for both new coronavirus cases and detecting antibodies — in Long Beach, outside the Mount Sinai South Nassau center for primary care, beginning June 23. The testing will be conducted Tuesdays and Thursdays, 9 a.m. to 1 p.m., by appointment only, calling 516-544-2351.

“The more we test, the more we can contain the spread of the virus to safely and promptly and on time reopen our economy here in Nassau County,” she said.

The number of hospitalized patients across the state continued to decline, with 1,358 patients recorded Wednesday for the lowest level since March 19. Deaths increased to 29 people Wednesday, from 17 the day before, but the overall trend is down.

In Oceanside, Mount Sinai South Nassau said it would begin allowing visitors Friday from 4 p.m. to 8 p.m. Northwell Health said it has started to allow COVID-19 patients at some hospitals to receive one visitor a day for patients in a room without a roommate.

Northwell had 330 COVID-19 patients on Thursday at the 19 hospitals it owns and operates, down 90% from its peak on April 7.

Cuomo said he is weighing whether to impose quarantine requirements on travelers from states such as Florida, after discussing the matter with experts.

“In some ways,” he added, “you want to talk about a full 180. Florida and other states imposed a quarantine on New Yorkers. … Fast forward 100 days: Now we are afraid they are bringing the virus to our state.”

With his daily briefings on the coronavirus response set to end Friday, a more jolly Cuomo praised top state officials who have helped him manage the crisis and even thanked the press for their probing questions. He expressed hope the virus would be kept under control after the state climbed a mountain of infections, disease and death.

“I hope it was only one mountain" of COVID-19 infections, he said. "I’m not interested in a journey across a mountain range … We accomplished what we set out to accomplish. We needed to tame the beast … and we did.”