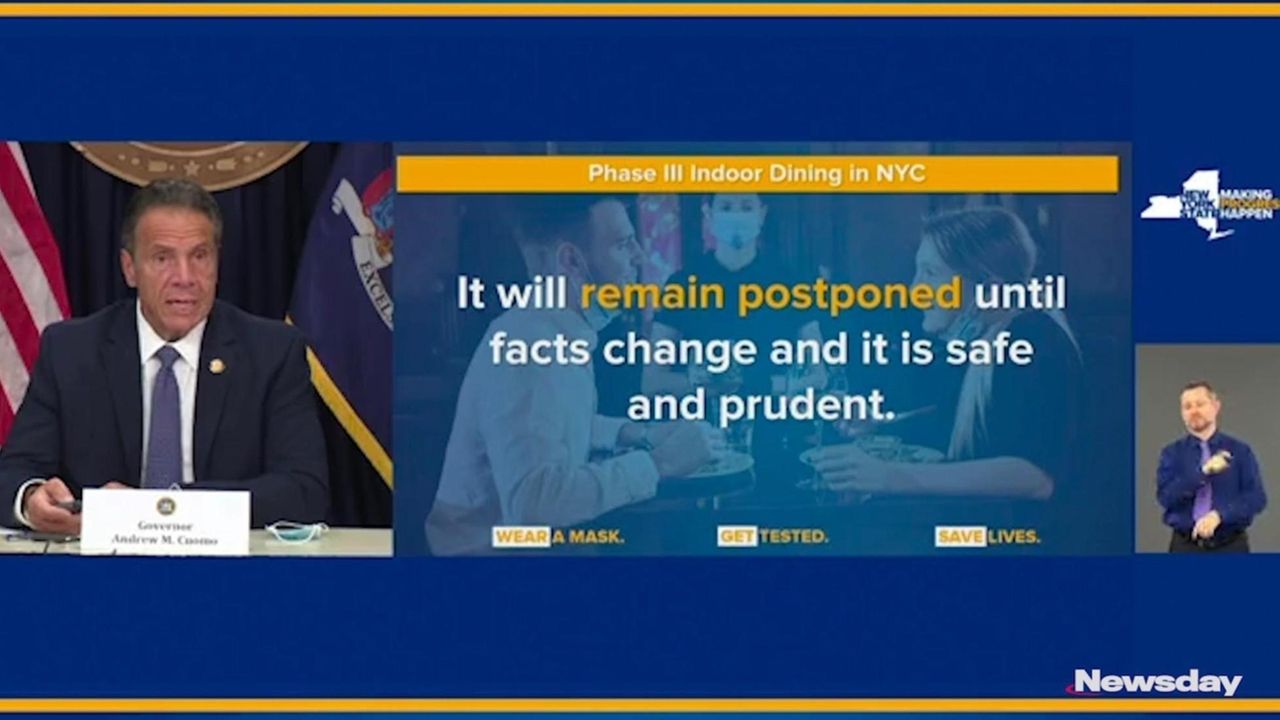 This story was reported by Robert Brodsky, Matthew Chayes, Candice Ferrette, Bart Jones and David Reich-Hale. It was written by Jones.

New York City won’t permit indoor dining to resume next week as was expected, state and city officials said Wednesday, with Gov. Andrew M. Cuomo saying the decision to bring back restaurants is postponed "until the facts change and it is prudent to open."

Cuomo lambasted President Donald Trump for what he called a failed response to the coronavirus pandemic that has created an escalating crisis, with 35 states seeing cases increase — some of them like Texas, Arizona and Florida breaking daily records.

He instructed local governments to step up enforcement of social-distancing and mask-wearing orders as ominous "dark clouds" in the fight against COVID-19 appear, though for the moment New York appears to be containing the virus.

His comments came as the state surpassed 4 million total coronavirus tests performed since March, part of its effort to turn what was a global epicenter of the pandemic into a state with one of the lowest infection levels in the country.

Earlier Wednesday, New York City Mayor Bill de Blasio had announced the resumption of indoor dining, stopped since the coronavirus shutdown in mid-March, would be delayed. He cited the rising viral spread around the country that is becoming "shockingly worse."

“We know a lot of other parts of this country very sadly made decisions based on something other than the data, in the heat of the moment," de Blasio said. "Now what we’re seeing in Florida, what we’re seeing in Texas, even California that tried really hard to get it right, flipping backward, we see a lot of problems, and we particularly see problems with people going back to bars and restaurants indoors, and indoors is the problem more and more. The science is showing it more and more.”

Indoor dining had been expected to restart July 6, with the Phase 3 reopening of New York City.

An industry group for restaurant and nightlife establishments, the NYC Hospitality Alliance, reacted with concern about the economic impact of the postponement. The group is calling for rent forgiveness and expansion of outdoor dining options to counter loss of business.

"Restaurants and bars have been making enormous financial sacrifices for four months, and their survival now depends on compensation reflective of those losses," Andrew Rigie, the group's executive director, said in a statement. "We respect the government and public health officials’ decision … but the longer neighborhood restaurants and bars are forced to be closed, the harder it will be for them to ever successfully reopen.”

“While it’s unfortunate that indoor dining at New York City restaurants will be delayed, Nassau County restaurants are eager to welcome everyone from the causal connoisseur to most ardent restaurant-goer in safe and socially distant dining areas," she said. "We closely monitor Nassau’s progress and cases every day and do not believe any such rollback is merited in our county.”

In Suffolk, County Executive Steve Bellone said he does not intend to close indoor dining either.

“Thus far we are encouraged to continue to see the infection rate and hospitalization numbers continue to trend in the right direction in Suffolk,” Bellone said. “We will continue to monitor the data on a daily basis to ensure the health and safety of our residents.”

The governor painted a dire portrait of the nation, saying it is in danger of sinking into a deeper morass.

He cited statements Tuesday by Dr. Anthony Fauci, the government's top infectious disease expert, that the country could see up to 100,000 new cases a day. Cuomo urged Trump to accept responsibility for a runaway virus and adjust course — as a first step, wearing a mask in public to set the right example. 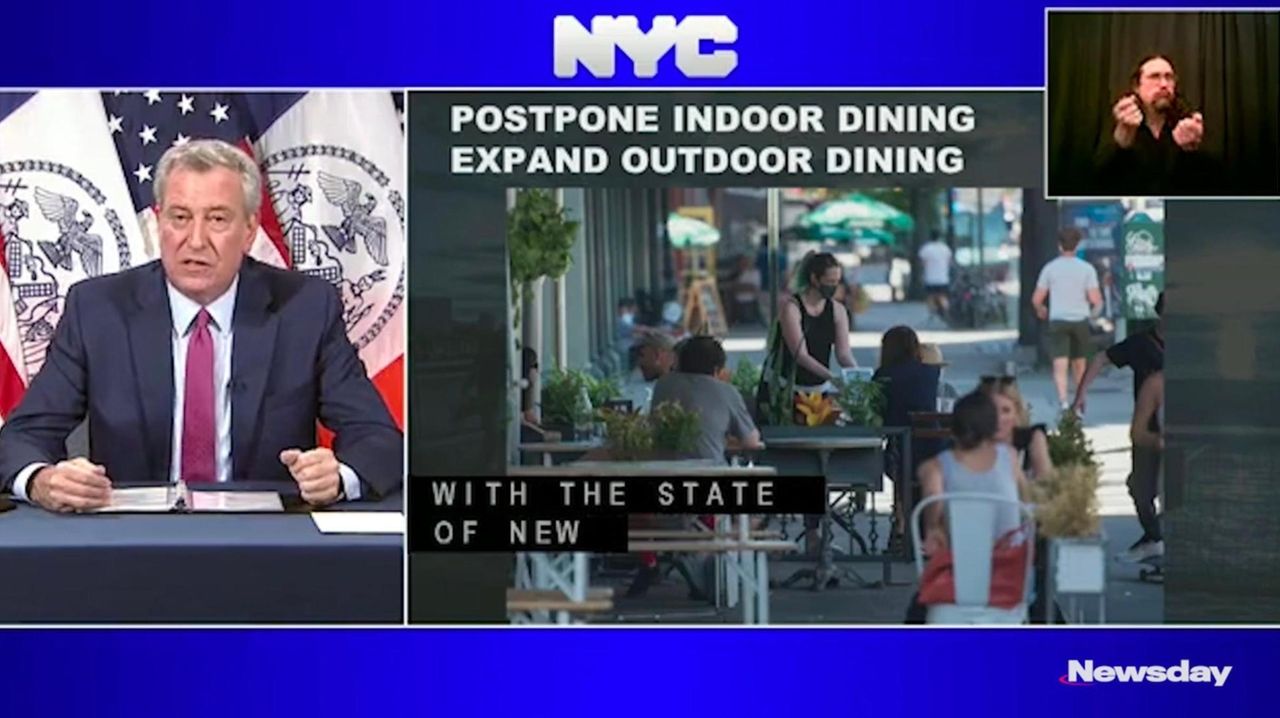 "Fact. The buck stops on the president’s desk … That’s what it means to be the president of the United States," Cuomo said. "He was in denial of the COVID virus from Day One … He denied the reality of this situation from Day One. 'Reopen right away, reopen right away,' 'Liberate those states' … 'You are artificially keeping the economy closed. There's no reason.' That came from him."

Trump had not mentioned the coronavirus crisis in tweets posted to his account by late afternoon Wednesday, but he had retweeted a post on Tuesday touting how the country leads others in testing.

On Tuesday, Cuomo had said travelers from eight additional states with high levels of spread of the virus would be required to quarantine upon arrival in New York. The added states were California, Georgia, Iowa, Idaho, Louisiana, Mississippi, Nevada and Tennessee. Already on the list were Alabama, Arkansas, Arizona, Florida, North Carolina, South Carolina, Texas and Utah.

De Blasio said Wednesday the city would seek information on those arriving from those states — from airports, bus depots and vehicles arriving via bridges and tunnels — and then follow up.

Along those lines, Cuomo announced he is a creating a state-level group to help local governments enforce social-distancing guidelines and other directives, but he said local governments have to do their jobs.

The state suspended the liquor license of an Island Park restaurant Wednesday for failure to comply with coronavirus orders.

Curran said in a statement that "Nassau County has been and continues to be all hands on deck — battling this pandemic with every resource at our disposal. That is why I have called on the federal government to step up and help us fund these critically important efforts while local business and revenues take time to recover.”

For the fourth straight day, the number of COVID-19 hospital patients in the state remained under 900, with 879 under hospital care. The daily death toll was 11.

The state logged 56,710 tests for COVID-19 on Tuesday, with 625 coming back positive for an infection level of 1.1%. That was the same level for Long Island and New York City.

Cuomo announced testing will now be available to anyone in the state, and not just certain people such as essential workers. He encouraged residents to get tested.

In the region, Northwell Health on Wednesday said it had 144 COVID-19 patients, down 11 from the day before.

Curran said officials in the 56 independent school districts in Nassau County are working toward a safe return to in-classroom learning, though she noted “a lot of uncertainty in our world right now.”

“Once we get the green light from New York State," she added, "I really am confident that we will be ready for in-person learning at the appropriate time. September would be my personal choice.”