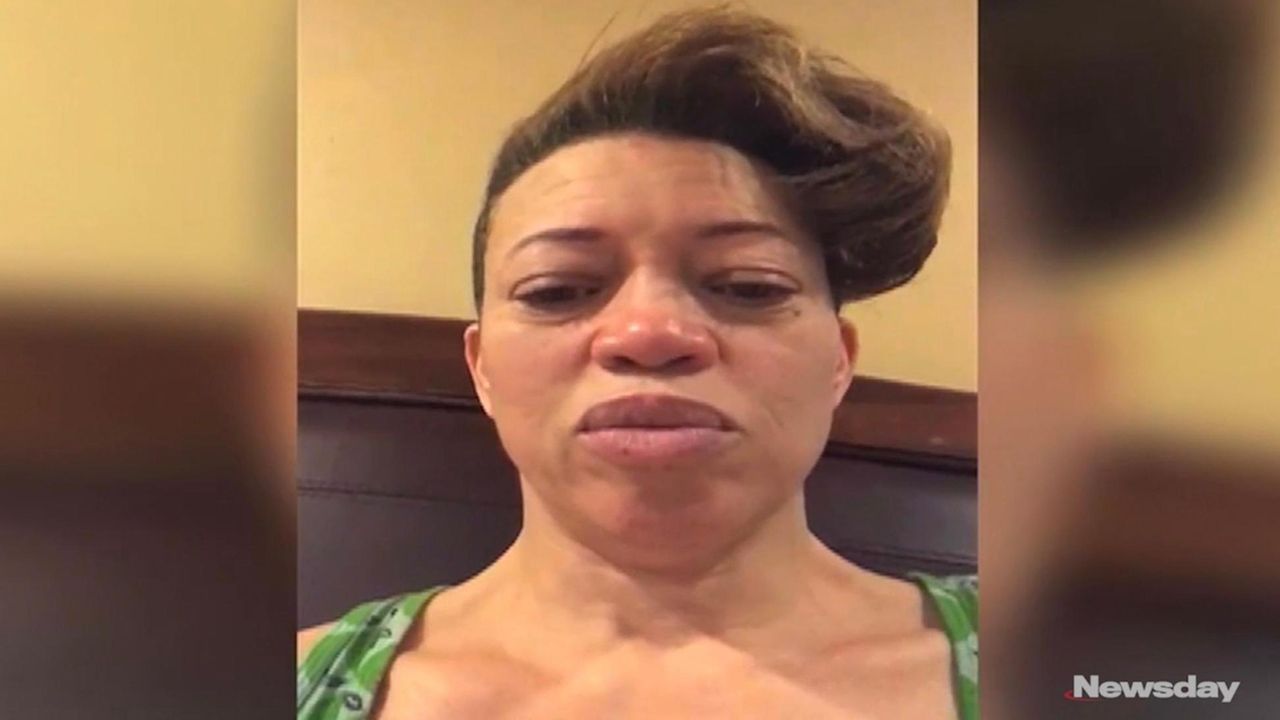 Dr. Michele Reed shared her video diary with Newsday as she battles coronavirus in her Lakeview home. Credit: Handout

The nighttime is the hardest.

It has been more than two weeks since Reed suspected she had the virus and quarantined herself in the bedroom of her ranch house in Lakeview. Her husband now sleeps in the basement. She hasn’t hugged her 16-year-old twin sons or even been in the same room with them for weeks.

During the day, they keep in touch via phone calls and text messages. Her husband comes in the room, wearing a mask and other protective gear, to deliver her meals. At night, however, when her fever tends to spike and she often feels her worst, she doesn’t want to wake them but she is often too frightened to really fall asleep.

“It’s a very scary feeling,” Reed said. “Nights are bad because I’m a doctor and I know all the things that can and cannot happen.”

Reed, 51, who has a family practice with offices in Rosedale, Queens, and in Garden City, tested positive for the virus on March 26. Since then, the family has been coping the best they can. She, her husband, Scott Kershaw, and her sons, Stephen and Marcus Kershaw, agreed to sharing video, phone interviews and a video diary with Newsday to provide insight into the ordeal a front-line health care professional — and her family — go through when she is stricken with coronavirus.

Reed first opened her practice in Queens 18 years ago. It is in a neighborhood with a large Caribbean immigrant population, and it is a point of pride with her, as a woman of color, that she has been able to serve “a population that looks like me.” It is an area that has been hard hit by the virus.

“We knew from the jump that she had a lot of patients with underlying health conditions in both offices,” Scott said. “Of course, we could not have predicted something like this was going to happen. But we talked about it and what could happen, and we started practicing social distancing early.”

About eight weeks ago, the two decided it was best if Scott started sleeping in another room. Reed also took the bathroom upstairs, and her sons and husband started using the one in the basement.

Reed put up a sign on the door of both her offices, asking patients to call first if they were experiencing symptoms of the virus. Yet, people who were desperate to get treated came in.

“People knew in our area if they called 911 and were in distress that it would take a long time, so they came to the doctor's office knowing if we called an ambulance it would be there in a few minutes,” she said. “It was par for the course that patients would call us back after they were admitted to the hospital and found out their results that they were tested positive.”

Reed had her last meal with her family on March 23. It was her husband’s 51st birthday; they all took a selfie together to remember it.

Reed began to have intestinal problems on March 25 and decided to get tested the next day. On Friday, March 27, the day she refers to in a video diary she keeps as Day 1, she woke up with a dry throat feeling like she had “eaten a lot of salt.” She went to her office to do some telemedicine, meeting with patients through Zoom and Skype. But on the way home she started to feel unwell and was coughing a lot. That night, she said she felt dizzy and when her husband went to check on her at 3 in the morning, she was out of it.

Though she wouldn’t get her positive test result for another week, there was no question in Reed’s mind she had the virus. She had an elevated temperature, a dry cough, noises bothered her and she couldn’t focus.

“My eyes ached, hands ached, elbows ached, the bottom of my feet were aching,” she remembered.

The night of Day 2 would be her worst. Reed was worried about Scott, who had been up most the night before with her and looked tired. Scott was the only healthy parent, and the couple also has elderly parents in the area that he has to check on a regular basis.

“The last thing we needed was for his immune system to get down,” she said. “I told him just to go to bed. I ended up going to the bathroom and being in there for three hours. I was texting three or four of my friends. I told them if something happens they needed to reach out to my husband or just call 911. I just felt so helpless.”

Since that night, her days and nights have fallen into a surreal rhythm.

During the day, Reed said she tries to rest and worries mostly about others. Both she and her medical assistant have tested positive for the virus, while her office manager tested negative. Everyone else in her office, with the exception of one receptionist, is feeling sick and some have had problems finding a place where they can be tested. She feels frustration that so many big testing centers — like the one at Aqueduct Racetrack — are drive-thru.

“My patients, my staff, a lot of people don’t own cars,” she said. “Are they supposed to get an Uber driver to take them to get tested? I don’t think that’s going to happen.”

She feels blessed to have friends who have helped. Some have dropped of treats such as ginger ale. Others check in by phone. One good friend regularly delivers medicine to their parents.

As a doctor and marathon runner, Reed is used to being in control of both her body and her schedule. Now she is dependent on others for almost everything. Though she has no control over how she feels, she seems to take comfort in being on top of her medical condition. She regularly takes her temperature and tests her oxygen levels, making note of both along with her symptoms.

She misses her sons desperately, especially last week when they when they celebrated their 16th birthday. In a pre-COVID-19 world, the three of them would have spent the day at the DMV to get their learner’s permit and the night celebrating at Capitol Grille or one of their other favorite restaurants.

Instead, they ate cake in separate rooms, sharing the experience with other friends via Zoom.

'It's a lonely place'

Though she has been able to talk with some friends out of her bedroom window, the only human she sees is Scott when he brings in her food each day.

“She wears a mask and I wear a mask,” said Scott, a lawyer with his own private practice. “I take the plates and I wash and sterilize them with scalding hot water. She has her own plate, fork and knife and she uses the same one every time.”

Reed knows she is fortunate to have a family, friends and a home. She said though she knows this has been hard on her sons, they also understand there are people whose suffering is greater. They know people whose parents who have died.

When she comes out of this, Reed said she will have an appreciation for what patients go through and she knows she can use that to help them.

“It’s real. I just can’t stress the loneliness,” Reed said. “It’s a lonely place. When I was on bed rest 16 years ago with twins, people could come visit you. Now, it’s just you and your technology. And sometimes I just don’t feel up to reading an email or a text.”

The loneliness often turns to fear at night when everyone else is asleep. Just to get through, Reed texts her night owl friends and spends hours online buying things she doesn’t really need. She also prays, asking God what he wants her to get from this ordeal. She admits it has been a test of her faith.

“As soon as I see the sun in the morning, I feel relieved,” Reed said, “because I made it through the night. And, as a Christian, I know that’s not a good way to feel. But it’s how I feel.

“I’m still human and I’m still scared. But every morning I am grateful.”

Check back for video updates from Dr. Reed as she battles COVID-19.

Lakeview doctor clears hurdle in her battle with COVID-19Dr. Michele Reed has gone three days without a fever, so she can stop self-isolation and focus on her family's health. Lakeview doctor fighting COVID-19 gets more good newsAs Reed's health improved, she began to worry about her husband, who was coughing and clearing his throat.