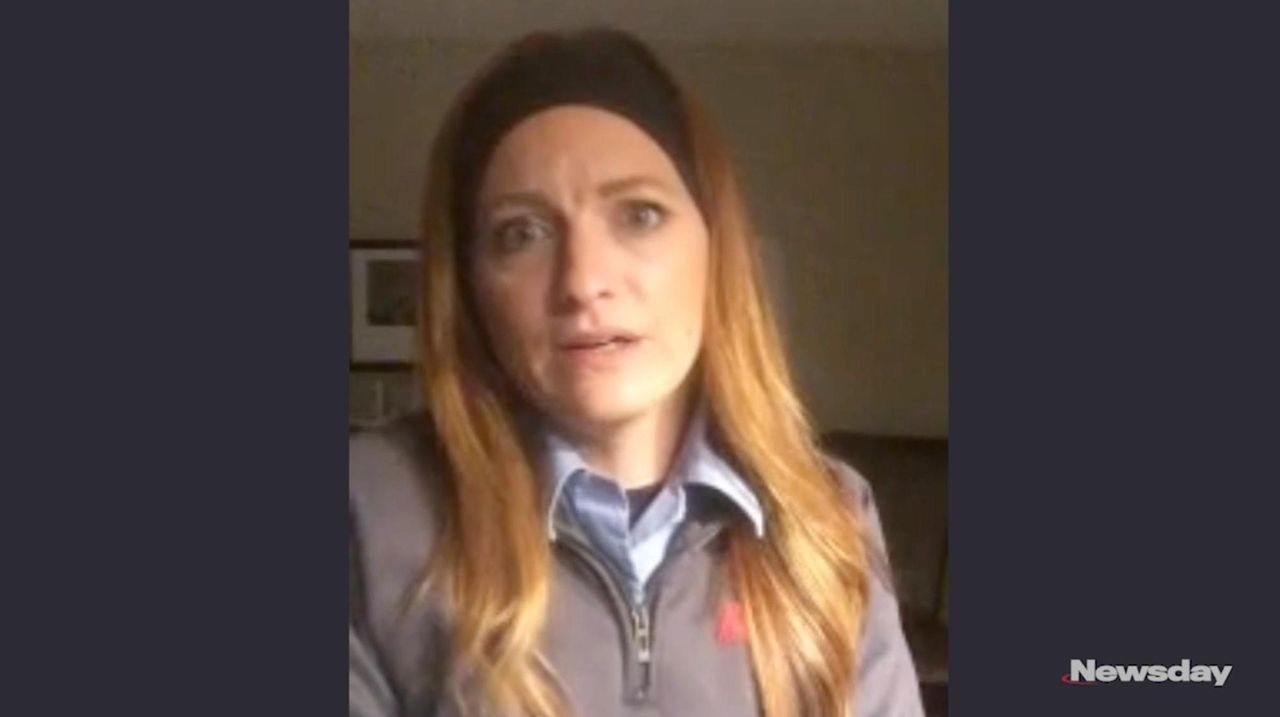 Ohio native Leilani Lemonier came to New York at the end of March to help with the increased demands on EMS workers due to the COVID-19 outbreak. She speaks to reporter Michael O’Keefe about her experience working on the Island.  Credit: Newsday

Jordan Shultz has witnessed firsthand the destruction the coronavirus pandemic  has inflicted on Long Island.

The 28-year-old emergency medical technician from Syracuse has been working in Nassau, where he said it has been particularly heartbreaking to see families in pain when he picks up the ailing relatives. The families, he said, are torn apart emotionally when they are unable to be with loved ones in their time of need.

“The family doesn’t know if they will see them again. You have to make sure they are saying their ‘I love yous’ and give them time before you take them," said Shultz, who has been working in Nassau during the pandemic. "It is a tough time.”

Shultz is one of the 790 EMTs and 350 ambulances FEMA sent to New York this month to provide assistance and relief to the city’s and Nassau's weary health care workers and first responders. Fifteen of those ambulances, along with 30 EMTs — including Shultz — were transferred to Nassau County, where more than 1,300 people have died from coronavirus-related causes, to assist frazzled weary paramedics and volunteer firefighters.

Nassau Police Commissioner Patrick Ryder said the out-of-towners have given his department’s paramedics and the county’s volunteer fire departments invaluable assistance, as well as an opportunity to get much-needed rest. A little room to breathe.

“My guys were exhausted, they were stressed to the max,” Ryder said. “These people are risking exposure with every call they go on and they are doing an outstanding job. I am so grateful for their assistance. This is the best outside support we have gotten during the pandemic.”

Shultz said it has been sobering seeing New York City completely shut. But for him, seeing the families make heartbreaking choices compounds the pain.

“Our job is stressful and this makes it even more stressful, especially when you go to a house and you are taking someone out,” Shultz said.

For Leilani Lemonier, of Akron, Ohio, her first trip to Long Island has been extremely challenging — but also rewarding.

“Mentally, physically, you have your exhausting days,” said Lemonier, 36. “But the most important thing is we end our day knowing we have helped this community. We have helped our brothers and sisters in the field as first responders. We have helped the hospitals. So all of that is worth it.”

Shultz and Lemonier work for AMR Inc., a national medical transport company that was contracted by FEMA to provide service to New York. Lemonier traveled to New York in a convoy of AMR ambulances from Michigan and Ohio that was pushing east on Interstate 80 on March 31, the same day New York Mayor Bill de Blasio announced the federal government was sending EMTs and ambulances to the city.

Lemonier said making the transition from Akron to Nassau hasn’t been easy: “You don’t always know where the nearest hospital is, so we ask the patients those questions: What hospital do you normally go to? Where would you like to go? And they always say, ‘Where are you from?’ After about the first week, people started to get the idea, they knew we were with FEMA.”

Shultz said he’s had to learn quickly on the job. 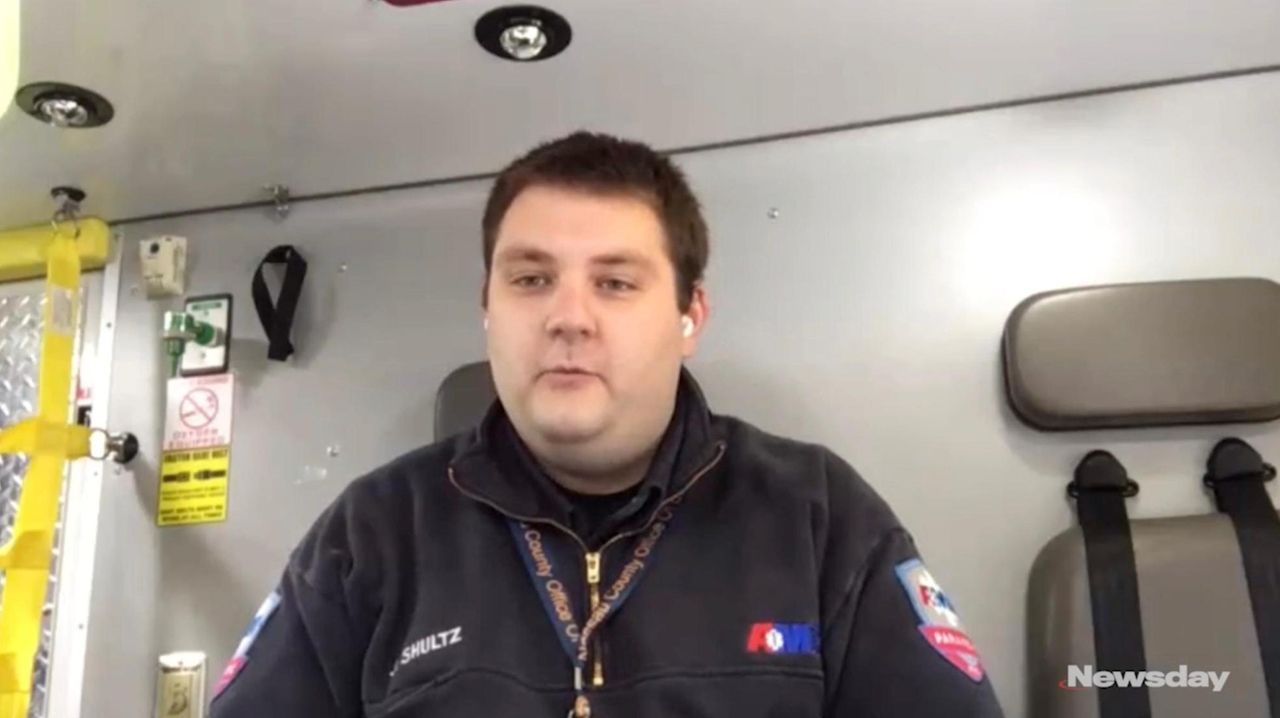 “I didn’t see it at home so I didn’t think it was as big of a deal as it turned out to be,” he said of the crisis in New York. “When I got here, reality struck. I saw how sick these patients are and how bad this pandemic really is.”

The out-of-towners say they have had to grapple with fears that they may become sick a long way from home. Lemonier, a mother of three, said she talked about the risks with her children after she was asked to work in New York. Many family members have served in the military, she said, and her kids — ages 19, 17 and 10 — know about duty.

“I told them, ‘Don’t let anybody tell you didn’t sacrifice through this because, you know, you didn’t have your mom home for a while,” Lemonier said.

Working in New York, she added, might be the safest thing for her family.

“I ran calls at home,” Lemonier said. “I think I was more of a danger being at home with my kids, bringing it off the street every day.”

Lemonier had never been to New York and she said her first trip to the city was surreal. There were no crowds, no traffic, none of the famed New York hustle and bustle.

“It was big and intimidating,” Lemonier said. “It was pretty empty.”

She said she hopes to return to Long Island, once the pandemic has ended, to spend some time with the health care workers and first responders she has worked with in Nassau’s coronavirus trenches. “They are amazing,” Lemonier said. “They work very hard. I see a lot of respect from their community towards them, I really do, I see it on every call.”

She just hopes she can find them.

“I may never recognize most of them when I come back because we are all wearing masks,” she quipped. “It’s like masked strangers. I know voices and I know the eyes of the nurses at the hospitals but if they took their masks off I wouldn’t recognize them.”

Get answers to your questions about the COVID-19 outbreak Newsday is committed to answering your questions about the coronavirus outbreak, from the best ways to avoid exposure to who is eligible for testing, and more. Here you'll find links to all our guides. Check back often as we continue to update this page. Resources to help you during pandemicNewsday has compiled this list of telephone numbers, websites and other resources to help you navigate life during coronavirus. See in photos how the coronavirus is changing life on LI, in NYC during April 2020See the latest pictures from around the region during the coronavirus outbreak for the month of April 2020 Data: See hospital beds available on LIA Newsday analysis of NYS Health Department data shows that Long Island had some 7,250 hospital beds before the coronavirus pandemic.