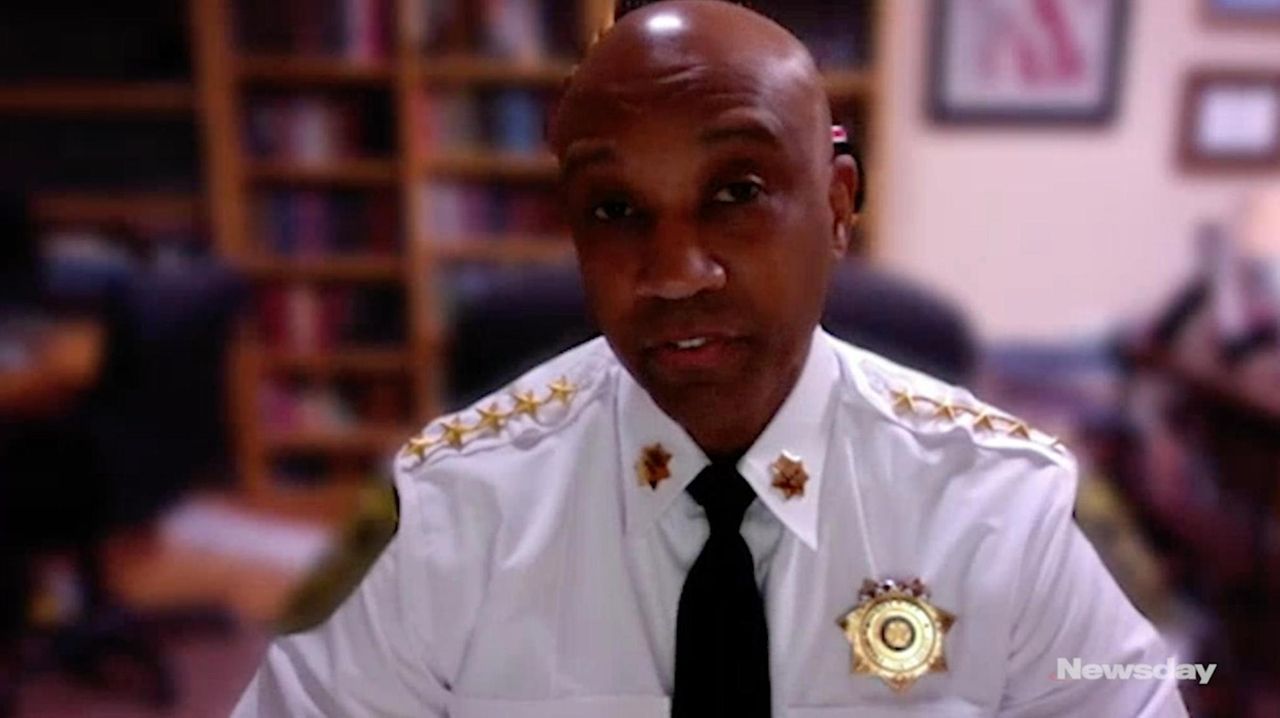 On April 8, Suffolk County Sheriff Errol Toulon Jr. talked about the procedures that have been in place to protect inmates at Suffolk County jails against COVID-19. Credit: Newsday staff

New York’s controversial bail reform — and the resulting decline in the state's jail population — has helped slow the spread of the coronavirus among those behind bars locally, officials said, even as new cases have exploded elsewhere on Long Island.

Bail reform enabled jail officials to segregate new admissions and those who display symptoms in the additional space created by the population decrease, correction officials said, one of several steps they have taken for more than a month to prevent the deadly virus from infecting inmates and staff.

Suffolk Sheriff Errol Toulon Jr. said bail reform gave his staff room to separate new admissions for 14 days in the jails his office runs in Yaphank and Riverhead, even as the number of cases topped 15,000 in the county.  Just one of the 560 inmates housed in the facilities this week have tested positive — a significant achievement since public health officials say jails, often crowded and unsanitary, can serve as incubators for infectious disease. The inmate was diagnosed late Wednesday.

“So far we are doing a really good job,” Toulon said. “Tomorrow might be different but so far we are holding down the fort.”

New admissions are also segregated at the Nassau Correctional Facility, where bail reform gave officials the room to put 19 inmates with coronavirus away from the general population, according to Sheriff James Dzurenda.

“We know where the non-affected population is, that was a big start,” he said. “We wanted to stay ahead of it."

The 1,500-capacity jail housed 632 inmates this week, Dzurenda said, the lowest population there in years.

“We had to open up a housing unit for people in isolation,” Dzurenda said. “We had to build an infirmary and, because of bail reform, we had the space.”

“We are seeing less symptoms. We have it under control or we’re not bringing in any new cases,” Dzurenda said.

But Susan Gottehrer, director of the Nassau County chapter of the New York Civil Liberties Union, said she is concerned about the upward trend in infected inmates and correction officers.

She has called for officials in both counties to provide the public with written plans addressing how they are going to protect inmates and correction officers. "If they are doing things that are good for the jail population they should let us know that," she said. "People in jail are not a sideshow."

Long Island correctional facilities have done a good job addressing the coronavirus crisis, said Serena Liguori, executive director of New Hour, a Brentwood social services agency that provides support and services to women and children impacted by incarceration. But, she said, there is still great concern among the incarcerated and their families.

“We are getting a lot of calls from the women’s jail, and tensions are running very high,” said Liguori, whose agency provides services for women in Suffolk jails. “Everybody is on edge.”

Advocates for New York’s bail reform, which took effect in January and barred courts from setting cash bail for misdemeanors and nonviolent felonies, said the measure was needed because low-income defendants who can’t afford to post bail often lose their jobs, homes and custody of their children while awaiting trial.

Critics of the law, including some law-enforcement officials, said it would contribute to an increase in crime and encourage defendants to skip court dates. State legislators responded to those complaints by adding a provision to this year’s state budget, signed into law on Friday by Gov. Andrew M. Cuomo, that makes more than a dozen additional crimes eligible for bail.

Long Island jail officials say they have also made efforts to protect inmates and staff from the coronavirus pandemic.

In Suffolk, Toulon has ordered correction officers to wear personal protective equipment and have their temperatures taken before they enter jail facilities. The sheriff’s office has barred in-person visits to jails since March 17. Inmates have been issued cleaning supplies and hand sanitizer.

In Nassau, correction officers and other staff can go to a special unit at Nassau University Medical Center to get tested if they display coronavirus symptoms. Employees who do test positive are required to stay at home for seven days, and barred from returning to work only after being asymptomatic for an additional 72 hours.

Both sheriffs said they’ve seen an increase in sick days in recent weeks but they have not had staffing issues.

“They are coming back to work right away,” Toulon said of staff members who have been sick or quarantined because they may have been exposed to the virus. “Nobody wants to stay at home.”

2:23
Pfizer shot may be available to kids as young as 12 in NY starting Thursday, Cuomo says
Have you lost a loved one to coronavirus? Tell us about them.
LI to start receiving $841M in federal stimulus funds
1:36
Officials: COVID-19 vaccine required for in-person SUNY, Hofstra students this fall
'Hamilton,' 'Lion King,' 'Wicked' coming back
Albany legislation targets fake vaccination cards
Didn’t find what you were looking for?