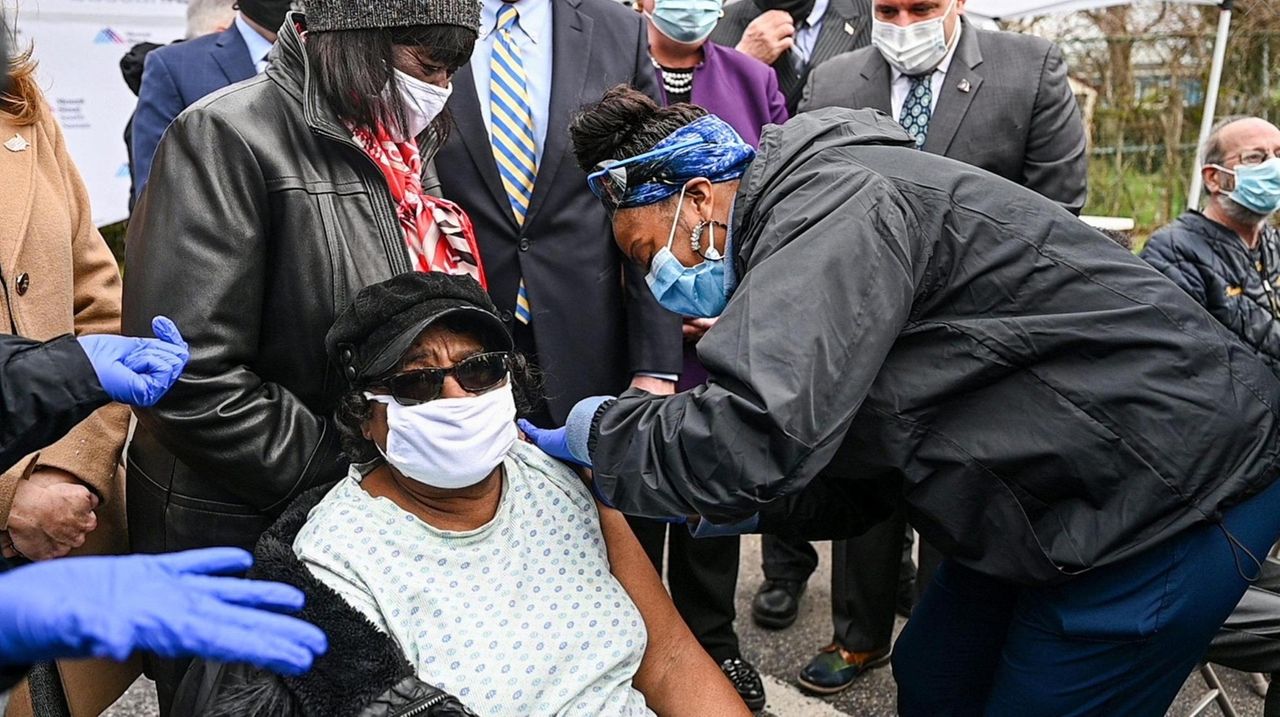 The mobile unit will distribute the vaccine to the elderly and those with underlying health conditions throughout the Town of Hempstead. Credit: Newsday / Alejandra Villa Loarca

New York State's coronavirus case rate is now among the highest in the United States, according to U.S. Centers for Disease Control and Prevention, eclipsed only by a handful of other states such as Michigan and New Jersey.

And Long Island has one of New York's highest infection rates statewide.

In June, Gov. Andrew M. Cuomo boasted that "we went from worst to first."

According to statistics Cuomo's office released Wednesday, the Long Island region continues to have one of the state’s highest infection rates. The seven-day average as of Tuesday is 4.38%, second only to the mid-Hudson region, which has 4.75%, the release said. The lowest rate is the Southern Tier, with 0.76%. New York City has 4.26%.

In an effort to combat a pandemic that's killed more than 50,000 in New York, the state, localities and others continue to vaccinate more people, a number that has climbed with each day.

On Wednesday, the Pfizer-BioNTech vaccine — one of the three available in the United States — was found to be highly effective on children as young as 12.

Of the three vaccines, 192,853 doses were administered across New York State over the most recent 24 hour period, according to a news release from Cuomo’s office, which said about 30% of New Yorkers have now gotten at least one dose, and about 18% are fully vaccinated.

"There is a very real possibility that you know, we can be completely out of this you know, within another six to eight weeks of very aggressive vaccination," he said at a news conference Wednesday.

The finding with the Pfizer-BioNTech vaccine came in a clinical trial concluding high effectiveness — no infections among those who got the shots, with even stronger antibody responses in kids than adults.

Hempstead unveils 'Vaxmobile' to help distribute vaccine shots The mobile unit will distribute the vaccine to the elderly and those with underlying health conditions throughout the Town of Hempstead. Credit: Newsday / Alejandra Villa Loarca

Mount Sinai South Nassau and the Town of Hempstead on Wednesday launched a mobile vaccination unit to deliver shots to eligible residents in the Town of Hempstead. The mobile unit aims to eliminate barriers to vaccination, including transportation, mobility, language or health, and bring one-dose vaccines directly to some hard-hit communities.

Also Wednesday, Nassau County Executive Laura Curran announced she would ask a regional coalition of business and nonprofit representatives to give advice for how to dole out $397 million in funds from the American Rescue Plan, the $1.9 trillion economic federal stimulus legislation passed earlier in March. The coalition, formed in March 2020, will make recommendations to Curran, according to Curran spokeswoman Justine DiGiglio.

Cuomo's office issued several news releases Wednesday regarding the state's coronavirus progress, including one noting the opening of 25 new rapid testing sites Thursday. Several of these sites will open nearby or at arenas, stadiums, and arts venues, which may admit fans starting Thursday if all attendees present proof of a recent negative COVID-19 test or immunization. Of the 25, 11 are on Long Island.

Long Islanders scramble for vaccine appointments on first day of 30-plus eligibilityIn most cases, appointments lasted minutes before being snatched up on the first day of the state's expansion of COVID-19 vaccine eligibility. How to get a COVID-19 vaccine appointmentFor Long Islanders still looking to get a COVID-19 vaccine, these resources might help. State: New Yorkers 30 and older can get COVID vaccine todayThe new eligibility expansion began at 8 a.m. today — and all state residents age 16 and older will become eligible for the shots on April 6, the state announced. Here's why the state's COVID-19 infection rate has leveled off More New Yorkers are getting vaccinated, preventing the state's infection rate from rising significantly, but the continued spread of the virus among unvaccinated people is preventing it from falling, experts say.