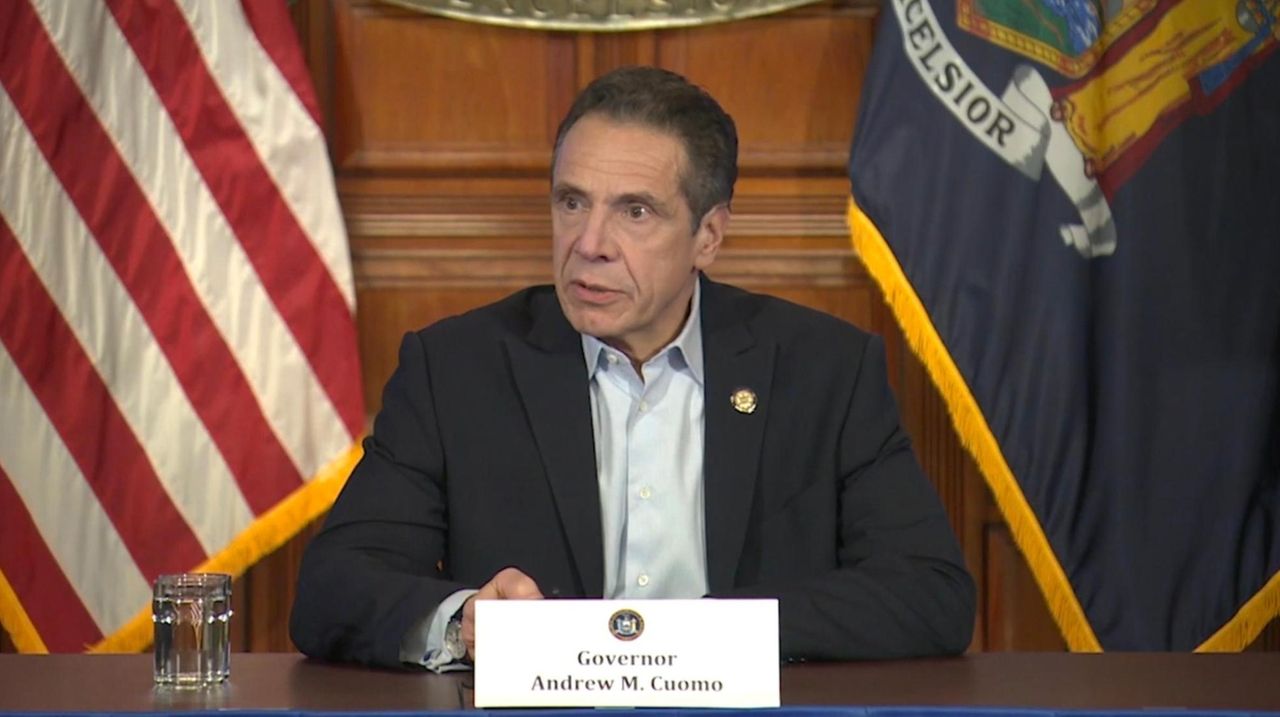 On Saturday, Gov. Andrew M. Cuomo said that New York State may be hitting what looks to be the plateau of the apex in the battle against the coronavirus. Cuomo said any decision to close or open schools will be coordinated among officials in the New York City metro area, with input from officials in Nassau, Suffolk and Westchester. Credit: NY Governor's Office

Gov. Andrew M. Cuomo said Saturday the state continues to flatten the curve of new coronavirus cases, but he clashed with New York City Mayor Bill de Blasio over the mayor's decision to keep schools closed through the end of the academic year.

Cuomo said that 783 additional New Yorkers have died of COVID-19, bringing the total to 8,627.

The state's daily death toll has been above 700 for the last five days, including a record 799 reported Thursday.

"You can see that the number is somewhat stabilizing, but it is stabilizing at a horrific rate,” Cuomo said. “These are just incredible numbers depicting incredible loss and pain.”

Roughly 1,658 people in Suffolk County were hospitalized with the virus as of Saturday, according to the latest figures. County Executive Steve Bellone reported 44 more deaths in the past 24 hours, bringing the county total to 458.

Also Saturday, Mount Sinai South Nassau hospital in Oceanside announced that two per-diem employees and a Freeport doctor with attending privileges at the hospital have died after battling COVID-19.

Across the United States, the death toll from the virus eclipsed Italy's for the highest in the world, surpassing 20,000. The death rate — that is, the number of dead relative to the population — is still far higher in Italy than in the United States, which has more than five times as many people.

About half the U.S. deaths are in the New York metropolitan area.

At odds over schools

Meanwhile, Cuomo said the state may close schools through June, but he pushed back on de Blasio's announcement Saturday that city schools would remain closed through the end of the academic year, saying such a decision would have to be made in coordination with the entire metropolitan area.

"There has been no decision. That's the mayor's opinion," Cuomo said in his Saturday briefing.

Earlier Saturday, de Blasio said the closure of the 1.1 million-student system would be extended amid the ongoing pandemic. "There is nothing easy about this decision. … It clearly will help us save lives," he said.

But Cuomo said any decision to close or open schools would be coordinated among New York City officials, with input from officials in Nassau, Suffolk and Westchester. He added that ideally the decision would be statewide and include New Jersey and Connecticut — and that it would not be made in the next few days.

The governor said he “values” de Blasio's opinion but said it's his own legal authority to close the schools. “The worst thing that can happen is to make a misstep, and let our emotions get the best of our logic,” Cuomo said.

He said the decision about reopening schools should be done in coordination with the decision to reopen businesses. 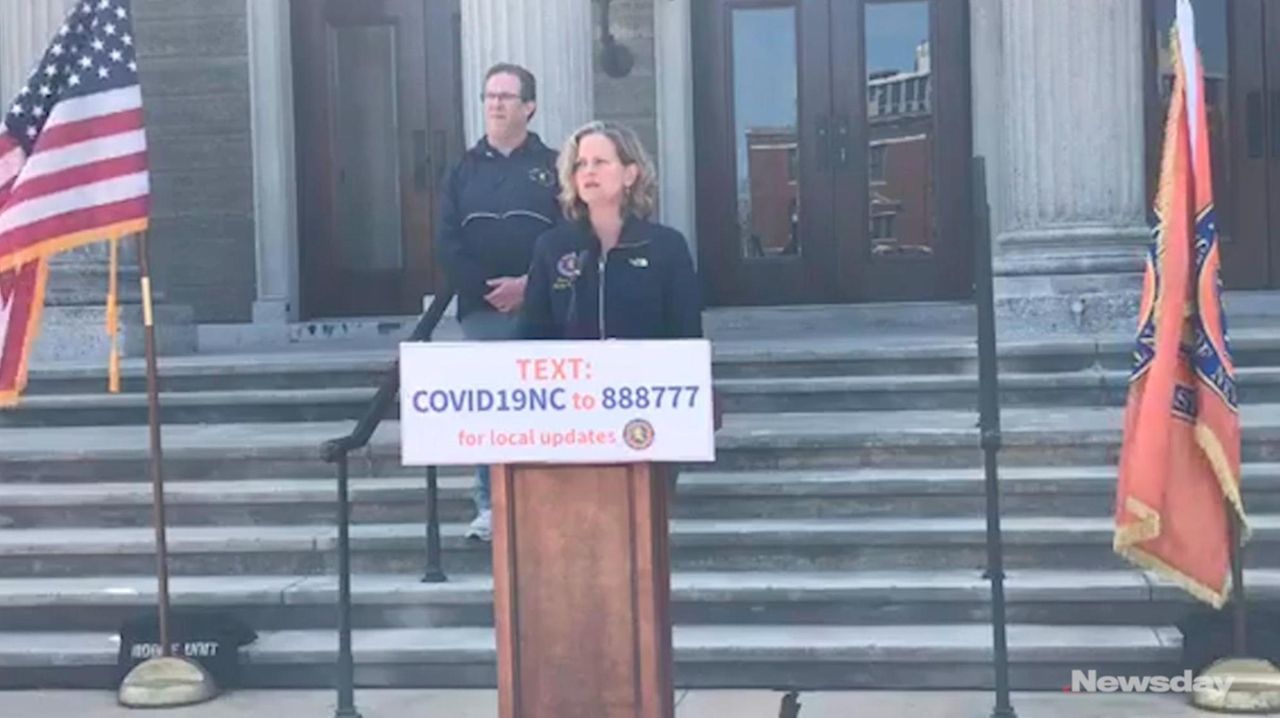 Earlier in March, Cuomo did not stop Long Island school districts from closing before New York City's. Among districts that had done so were those in Jericho and Sag Harbor.

"The governor's reaction to us keeping schools closed is reminiscent of how he reacted when the mayor called for a shelter in place," de Blasio press secretary Freddi Goldstein said. "We were right then and we're right now."

In March, the week before Cuomo issued a stay-at-home order, de Blasio had suggested essentially the same thing, but Cuomo dismissed the idea, only to impose it several days later, calling it "PAUSE."

Places that implemented such measures earlier, such as California, have had far fewer infections and death tolls.

Interviewed Saturday evening on activist Al Sharpton's MSNBC talk show, de Blasio said he must do what's best for the city and the school system that he said he controlled by law.

De Blasio is planning to reopen schools in September. “We’re going to be playing a lot of catch-up,” he said. 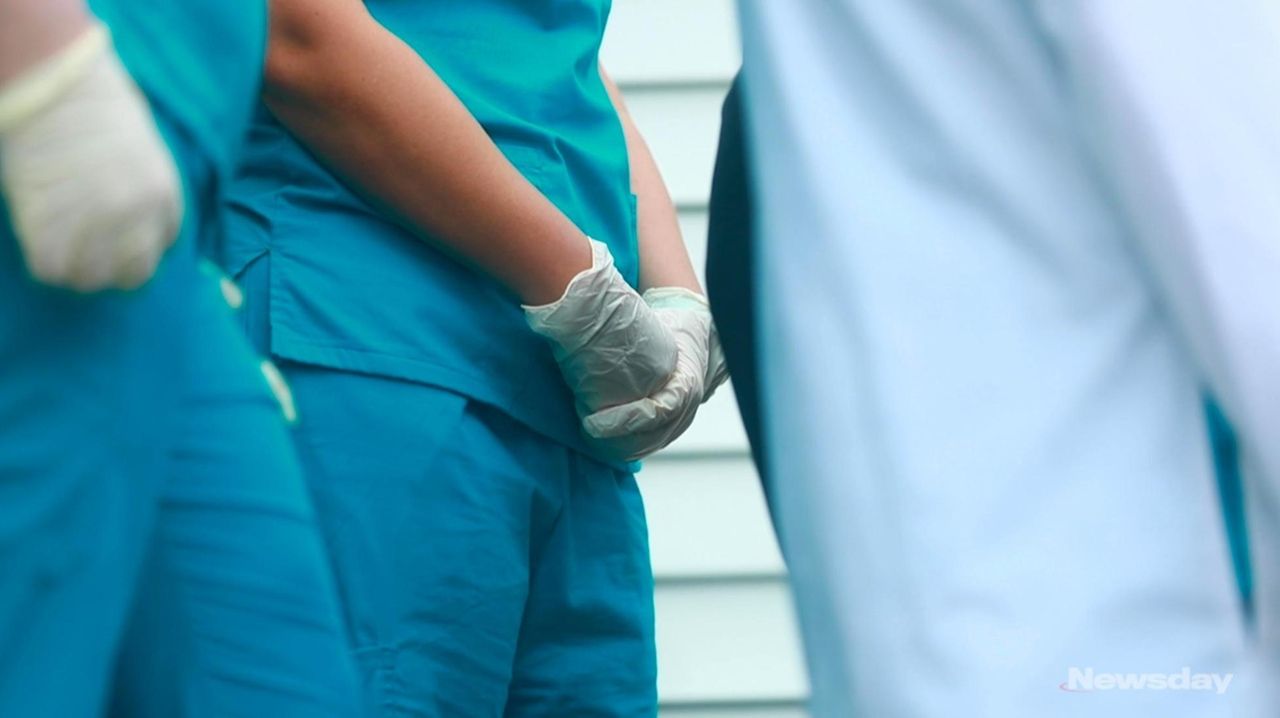 Curran said Saturday she fully supports Cuomo’s regional approach to reopen schools. “We are not an island unto ourselves. We have to do this in a way that is regional, methodical and well thought-out," Curran said.

Bellone said he too agreed with the governor that the decision should be made on a regional basis.

In a bit of good news, Suffolk County had another 160 people sent home from hospitals in the last 24 hours, Bellone said.

“That’s the highest we have seen and it’s a measure of where we are going,” he said. “By no means should it suggest that we should change course in any way, but we should look at the numbers realistically and say that is a very positive sign."

Suffolk County has seen a decrease of COVID-19 patients in intensive-care unit beds for the week, although the county still has 771 patients who tested positive for the virus in ICU beds, he said.

Bellone pointed out that last week, the county was averaging 144 new patients daily testing positive for the virus. This week, that number has dropped to 35 daily.

On the testing front, Bellone announced Saturday that new “hot spot" testing sites will be opening in Wyandanch and North Amityville this week, with more details to follow.

In Nassau County, meanwhile, there are 481 patients on ventilators as of Saturday, an increase of four.

Countywide, Nassau reported 138 police officers and personnel who have tested positive, including the county, village and city police departments. The county has 161 police personnel in quarantine and cleared 170 officers from quarantine, Curran said.

The Nassau County Sheriff’s Department reported 51 positive cases and 77 in quarantine, with 47 officers cleared and back to work.

There have been 19 Nassau County inmates who have tested positive with five inmates pending results and 16 inmates cleared from quarantine.

Cuomo on Saturday also advocated for the repeal of SALT, the federal initiative that placed a $10,000 cap on federal tax deductions for state and local property and income taxes.

“It was a gratuitous, offensive, illegal action, I believe, to begin with,” he said.

Cuomo said it would be impossible for the country to recover from the pandemic without the strong economic engine of the New York metropolitan region, and he hoped the next federal stimulus bill is “less political, less pork barrel.”

He also praised President Donald Trump’s response to the coronavirus pandemic in New York. “I’ve worked hand-in-glove with the president,” he said. “He has really responded to New York’s needs."

In Oceanside, Mount Sinai South Nassau hospital announced the deaths of the two per-diem employees and the doctor.

Ferdinando Moretti, 73, a hospital painting crew foreman who retired in 2014 after 31 years at the hospital and returned in 2015 as a per diem employee, died on April 4.

Richard J. Murphy, the hospital’s president and CEO, sent a memo to hospital staff that said the three “exemplify what makes every Mount Sinai South Nassau employee and medical staff member special, the willingness to be present during a time of unprecedented crisis with a special commitment to the patients we serve.”

Northwell Health said on Saturday it has 3,311 COVID-19 patients at its 19 hospitals, which include 11 on Long Island. The largest health system in the state has reported between 3,300 and 3,400 patients all week.

Also Saturday, the New York State Nurses Association requested that the state release its stockpiles of PPE to the facilities that are most in need. If there are no stockpiled supplies remaining, the union urged the state "to take all necessary measures" to address the shortage.

A letter from the publisherLong Islanders are proving their strength, spirit and resilience every day. Our journalists are telling stories of suffering and heartbreak along with stories of great courage and humanity. See the latest news on the coronavirus, vaccinesKeep up to date with the latest on the global coronavirus outbreak.